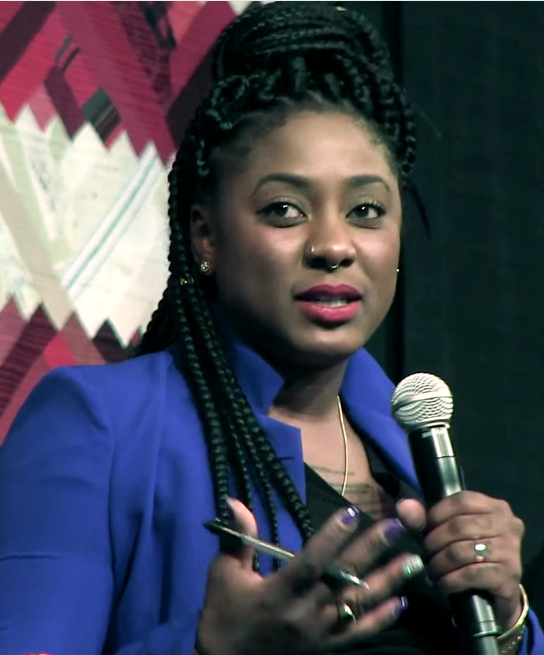 Alicia Garza is a California-based activist and a co-founder of the #BlackLivesMatter online movement and the Black Lives Matter Global Network Foundation.

Garza’s activism began at an early age, but her rise to national prominence began with a Facebook post in response to the acquittal of George Zimmerman for the 2012 shooting Trayvon Martin. [1] Fellow activist Patrisse Cullors helped turn Garza’s statement that “black lives matter” into a the hashtag that saw widespread use protests erupted in Ferguson, Missouri after the death of Michael Brown at the hands of a police officer. [2]

Garza, who has been described as a “trained Marxist,” has expressed the belief that “black lives can’t matter under capitalism.” [3] In 2020, she endorsed Senator Elizabeth Warren (D-MA) in the Democratic Presidential Primary. [4]

Garza was raised in California as Alicia Schwartz. Her mother is African-American and her stepfather is Jewish. In a 2019 Twitter post, she claimed to be “Jewish not white.” According to Garza, her parents, who ran an antique business, were “solid liberals” and her mother was a major reason she became an activist. [5]

During her adolescent years, Garza’s family moved to Tiburon, California, a wealthy and predominantly white community in the San Francisco Bay Area. There she attended Redwood High School, which is one of highest-ranked public schools in America. [6] In a 2019 interview, Garza claimed her mother, while driving a Mercedes, was pulled over on occasion by local police who did not believe she lived in the community. She attended the University of California, San Diego (UCSD) where she studied anthropology and sociology. [7]

Garza’s political activism began while she was in middle school where she advocated for contraceptive availability. [9] Garza has credited a documentary on controversial Planned Parenthood founder Margaret Sanger as an inspiration to focus on further activism. In 2002, she helped organize the first Women of Color Conference across the University of California system. [10]

After college, Garza returned to the Bay Area to work in the social-justice sector. [11] She interned with the School of Unity and Liberation (SOUL), a social-justice training program where she says she received “a crash course in grassroots community organizing.” Garza also describes the education at SOUL as “analysis around capitalism and imperialism and white supremacy and heteronormativity.” [12]

Later, Garza joined People United for a Better Life in Oakland (PUEBLO) as a community organizer to fight the placement of a Walmart store in East Oakland. [13]

In 2013, Garza posted what she called “A Love Letter to Black People” on her Facebook page after George Zimmerman was acquitted on criminal charges for the 2012 shooting death of Trayvon Martin. [14] Zimmerman was found to have acted in self-defense after being attacked by Martin in Sanford, Florida. [15] In her post, Garza wrote, “I continue to be surprised at how little Black lives matter.” [16]

Patrisse Cullors, an activist from Los Angeles and acquaintance of Garza’s, responded to the post with the hashtag “#BlackLivesMatter”. As the hashtag spread on social media, Garza and Cullors decided to build a campaign and reached out to immigration activist Opal Tometi for assistance building an online platform. [17]

According to a report by the Center for Media and Social Impact at American University’s School of Communication, the #BlackLivesMatter hashtag was rarely used before July 2014. [18] The Ferguson, Missouri protests in the wake of the death of Michael Brown, who was killed while rushing at a police officer, became the catalyst for hashtag’s proliferation on social media. [19]

The Black Lives Matter Global Network Foundation is the organizational structure created by Garza, Cullors, and Tometi after the Ferguson protests. All three women are listed as “co-founders” on the Blacklivesmatter.com website which serves as the organization’s homepage. [20] The Foundation was originally sponsored by the Thousand Currents grantmaking organization, but now operates under the umbrella of the Tides Center. [21] [22] One of the Foundation’s key aims is to “disrupt the Western-prescribed nuclear family structure.” [23]

After a grand jury declined to indict Ferguson police officer Darren Wilson for the shooting death of Michael Brown, Garza led a group of activists to shut down a Bay Area Rapid Transit (BART) line for up to four and a half hours. The protestors formed a human chain with cables and bicycle locks to prevent a BART train from leaving the West Oakland Station and forced police to partially disassemble a train car to remove them after approximately one and a half hours. [24]

In 2015, Cullors discussed the ideological foundation behind the Black Lives Matter movement in an interview. Referencing Garza, she said, “The first thing, I think, is that we actually do have an ideological frame. Myself and Alicia in particular are trained organizers. We are trained Marxists. We are super-versed on, sort of, ideological theories.” [25]

Garza’s own words underscore her Marxist ideology. In 2015, she said, ““Black lives can’t matter under capitalism. They’re like oil and water.” [26]

She told National Geographic that it’s “a big problem” that “white Christian men” are “a vast majority of the U.S. Congress.” [27]

Garza and the Black to the Future Action Fund formally endorsed Senator Elizabeth Warren (D-MA) in the 2020 Democratic Presidential primaries. [28] In making the endorsement, Garza said, “[Warren is] the person who we think will best help black communities.” [29]

Garza publicly criticized eventual Democratic nominee Joe Biden, saying his campaign was “pretty far from the concerns” held by the Black Lives Matter movement. [30] Also Garza has said Biden’s running mate should be “a Black woman in particular and not just a woman of color.” [31]

However, Garza praised the Biden campaign’s “Plan for Black America” that proposed a $15,000 tax credit to help first-time black home owners and $70 billion in funding for historically black colleges and universities. [32]

In 2018, Garza launched Black Futures Lab, which is sponsored by the Chinese Progressive Association of San Francisco. [33] According to the Black Futures Lab website, the group is “focused on collaborating with Black people, Black elected officials, and Black community-based organizations to build progressive political and legislative power in order to get us closer to having the communities and political power we deserve.” [34]

The Black to the Future Action Fund is the political advocacy arm of Black Futures Lab. [35]  The Action Fund has a history of endorsing notable left-of-center candidates for office such as Stacey Abrams for Governor of Georgia, Andrew Gillum for Governor of Florida, and U.S. Representative Ilhan Omar (D-MN5). [36]

In 2019, Garza partnered former Planned Parenthood director Cecile Richards to launch Supermajority, a lobbying group that aims to “train and mobilize two million women across America to become organizers, activists, and leaders ahead of the 2020 election.” [37]

Garza is the director of strategy and partnerships at the National Domestic Workers Alliance (NWDA), a labor union-aligned advocacy organization. [38]