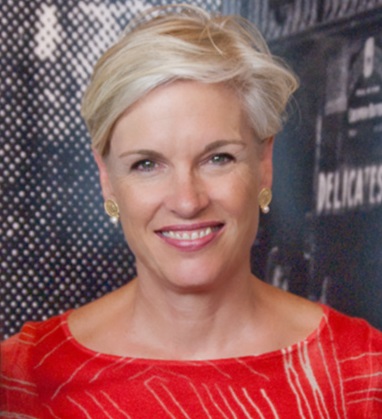 Cecile Richards, president of the Planned Parenthood Federation of America (link) by CarlB104 is licensed CC BY 2.0 (link)

Prior to her work for Planned Parenthood, Richards served as the deputy chief of staff to then-minority whip Rep. Nancy Pelosi (D-California).[10] She also founded a number of influential liberal organizations. In 2003-2004 she co-founded and presided over America Coming Together[11] and America Votes, [12] two of the “527” political committees that were created to support the Presidential campaign of then-U.S. Senator John Kerry (D-Massachusetts). Together these two organizations coordinated hundreds of millions of dollars[13] worth of spending among a large number of liberal donors and influence organizations including George Soros, Peter Lewis, the AFL-CIO, the Association of Trial Lawyers of America, the Sierra Club, Planned Parenthood, and the American Federation of Teachers.[14][15] Richards also founded the Texas Freedom Network to support abortion policies in Texas while opposing the agenda of the state’s religious conservatives. [16]

Richards also spent nearly a decade as a national union organizer, most notably running the SEIU’s “justice for janitors” campaign in Los Angeles. [17]

Richards was invited to President Barack Obama’s White House 39 times,[18] and is credited with firming up the Democratic Party’s embrace of abortion rights “as a central part of the party’s platform.”[19] Time named Richards one of the most influential people in the world during President Obama’s first term.[20]

Cecile Richards was born in Waco, Texas in 1957. Her father, Dave Richards, was one of the most active labor-union lawyers in Texas, and her mother, Ann Richards, was a politician who is (as of 2018) the most recent Democrat to serve as Governor of Texas.[21][22]

Before college, Cecile and her mother worked for Sara Weddington’s 1972 campaign for the Texas State House. Weddington came to fame as the lawyer who successfully argued Roe v. Wade before the U.S. Supreme Court.[23]

Cecile met her husband Kirk Adams while the two were working as union organizers. Adams currently works for the Service Employees International Union (SEIU)[24] and the couple lives in New York City.[25] They have three children. Lily, the oldest, has served as the press secretary for U.S. Senator Tim Kaine (D-Virginia)[26] and worked for Hillary Clinton’s presidential campaign.[27]

While at Brown University, Cecile Richards supported a janitors’ strike, helping her into a career as a union organizer.  Beginning in 1980,[28] she traveled the country running a number of union organizing campaigns for garment workers in the Rio Grande Valley,  nursing home employees in East Texas, and hotel workers in New Orleans.[29]

In the late 1980s, Richards led the SEIU’s “Justice for Janitors” campaign, which unionized and demanded higher pay for cleaning crews in Los Angeles.[30]

In 1990 Richards and her family moved to Austin so she could run her mother’s gubernatorial campaigns.[31] [32] After her mother lost re-election in 1994 (to future President George W. Bush), Cecile created the Texas Freedom Network, an influential liberal group[33] to combat religious conservative “issues, organizations, money and leaders” and to combat the pro-life agenda. [34]

In 2002 and 2003 Richards served as Rep. Nancy Pelosi’s deputy chief of staff during Pelosi’s time as Democratic whip in the House of Representatives.[35] Pelosi touted Richards’s efforts saying, “Cecile helped me set up the whip office […] Everyone knows she’s politically astute and a wonderful communicator, but she’s also a great administrator. She could be the President.”[36]

In 2004, Richards founded and then served as the president of the liberal 527 organization America Votes[40] “a Washington-based coalition of 32 of the biggest, richest, and most influential unions and liberal interest groups in the country.”[41] America Votes’ members included ACT, the AFL-CIO, the Association of Trial Lawyers of America, the Sierra Club, the NAACP, the League of Conservation Voters, Planned Parenthood, and the American Federation of Teachers (AFT). [42]

During her time at the head of Planned Parenthood, “Richards greatly expanded the organization’s fundraising and organizing capabilities — and helped raise its profile through celebrity-oriented campaigns and increased political participation.”[47] According to Time, when Richards took the reins at Planned Parenthood in 2006, “the organization didn’t even have a centralized website.” However, under her leadership it gained “much more political heft” that resulted in President Barack Obama mentioning Planned Parenthood during his 2012 presidential debates.[48]

According to Buzzfeed, Richards’ and Planned Parenthood’s advocacy could largely be credited with the Democratic Party’s embrace of abortion rights “as a central part of the party’s platform.”[49]

Shortly after taking over as president of Planned Parenthood Richards delivered an emphatic speech where she pledged “to swing the vote in 2006, 2008 and 2010” and to use the power gained from those elections to influence legislative policy.  She specifically promised that under her watch “Planned Parenthood [was] going to become more political” so that she could beat back pro-life policy opponents.[56]

Similarly, the budget for the Planned Parenthood Action Fund, the organization’s formal 501(c)(4) lobbying arm, grew from $4.3 million the year before Richards took over to  $24.8 million in 2015.[64]

When asked to prioritize “the most important part of Planned Parenthood’s work,” Richards said that the organization’s lobbying efforts were just as important as its provision of healthcare services.[65]

In 2010 Richards celebrated the passage of Obamacare with President Barack Obama, and she proclaimed that House Speaker Nancy Pelosi’s efforts to pass the legislation had been “heroic.”[66] Richards said she was “most proud” of securing the Obamacare mandate that required all insurers to provide birth control for free. [67]

In 2017, Richards, flanked by House Democratic Leader Nancy Pelosi and the House’s Pro-Choice Caucus, pledged to fight against Republican efforts to defund Planned Parenthood and launched the “I Stand With Planned Parenthood” campaign.[68]

Richards has stated that, after her departure from Planned Parenthood, she plans to “pour herself into the midterm elections, fund-raising and campaigning for Democrats”[70] and to increase and organize the number of women who run for office and who vote.[71]

She also wrote a book entitled Make Trouble: Standing Up, Speaking Out, and Finding the Courage to Lead — My Life Story, published in April 2018.[72] Hillary Clinton praised the book calling it “practical advice and inspirations for aspiring leaders everywhere” and U.S. Senator Kamala Harris (D-California) called it a “must-read.”[73]