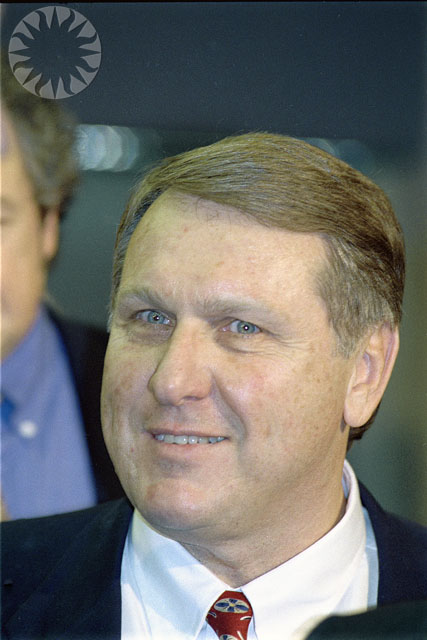 James P. Hoffa is the president of the International Brotherhood of Teamsters, commonly known as the Teamsters Union. He is the son of James R. “Jimmy” Hoffa, the mid-20th century leader of the same union who disappeared under mysterious circumstances in 1975.

In February 2020, Hoffa announced that he would not seek re-election in 2022 and said that he thought it was “time for the next generation to take over.” Hoffa said he intended to “make a contribution to the union” and remain “active in the community here in Michigan” even in retirement. He did not immediately announce any endorsement of a potential successor. [1]

Jimmy Hoffa, James Hoffa’s father, rose to power in the Teamsters Union starting in the 1940s, first as president of the Michigan Conference of Teamsters, then as vice president of the international organization, and finally as president in 1957. Under his leadership, the Teamsters became the largest labor union in the United States. His activities as a labor movement leader brought him into contact with organized crime, and the United States government prosecuted him on numerous charges throughout the 1960s. In 1967, Hoffa was sentenced to 13 years in prison for jury tampering, conspiracy, and fraud, though President Richard Nixon commuted his sentence in 1971 on the condition that he refrain from engaging in union activity until 1980. In 1975, he disappeared from a restaurant in Detroit, Michigan, where he was allegedly supposed to meet two associates with ties to organized crime. He was declared missing and never seen again. [2]

Seven years after Hoffa’s disappearance, his son James successfully petitioned to have him legally declared dead, saying that “at this late date nobody has any hope.” Presumption of death also allowed the family to settle Hoffa’s estate. [3]

Hoffa joined the Teamsters Union when he turned 18 and went on to earn his law degree at the University of Michigan. He spent 25 years as an attorney for clients of the Teamsters. In 1991, he attempted to run for the union presidency, but federal officials declared him ineligible because he had never officially worked as a Teamster. To become eligible, he took an administrative position in the union. He ran for the position in 1996, lost to incumbent president Ron Carey, but won in a special election two years later after a funding scandal forced Carey to step down. [4]

Although Hoffa’s lack of work experience as a Teamster had made him ineligible to run for the union presidency in 1991, his profile on the International Brotherhood of Teamsters website states that he “worked as a Teamsters laborer in Detroit and Alaska in the 1960s.” The website does not specify what kind of work Hoffa did. [5]

Like most labor union officials, James Hoffa opposes right-to-work laws, which make it illegal to charge employees union dues if they do not want to be union members and make it illegal to require union membership as a condition for employment. At a 2011 rally against right-to-work in Toledo, Ohio, he claimed that supporters of the policy had “declared war on us,” and accused the 14 states with proposed right-to-work laws of being part of a “conspiracy” against unions. [6] In 2012, Hoffa justified his opposition to right-to-work by arguing that unions are “part of a fabric that makes this country run.” He also claimed that politicians and businesses “don’t accept us as being there” and “want to knock us out.” [7]

In 2008, Hoffa argued in support of the proposed Employee Free Choice Act, which would effectively remove workers’ right to a secret ballot to decide whether to unionize. Instead, a majority of workers’ signatures would be enough to certify a union. [8]

In 2008 and 2012, Hoffa endorsed Barack Obama for president. In a 2008 op-ed for the Huffington Post, he said that his endorsement – and that of the Teamsters Union – “begins a partnership to change America” and “reinvent the political process.” [9]

In 2016, Hoffa announced that the Teamsters would endorse Hillary Clinton for president. He also said that Clinton would “stand strong for the workers of America by fighting to reject job-killing trade deals.” Clinton, who supported the North American Free Trade Agreement throughout the 1990s and early 2000s, said she was “honored” by Hoffa’s endorsement. [10][11]

In 2020, Hoffa said he approved of President Donald Trump “basically doing things that are not Republican,” and acknowledged that this had earned him support from some labor union members. However, the Teamsters Union endorsed Joe Biden for president. [12]

Under James P. Hoffa’s leadership, Teamsters Union membership fluctuated, but stood at more than 1.4 million in 2020, roughly the same as when he was first elected in 1998. The union’s strike fund was empty when he took over, but now has $275 million. In 2001, the union added a pledge against organized crime to its constitution, and in 2015, the Teamsters declared that the influence of organized crime “has long been expunged.” [13]

Throughout his career, Hoffa has served both Democratic and Republican administrations in various roles. He sat on the Secretary of Energy’s Advisory Board and the President’s Council on the 21st Century Workforce from 2002 to 2004, and the National Freight Advisory Committee from 2013 to 2015. He sat on the Department of Labor Advisory Committee for Trade Negotiations and Trade Policy. He also sits on the board of the left-of-center Roosevelt Institute. [14]

In 2005, the Teamsters Union and Service Employees International Union (SEIU) split from the American Federation of Labor – Congress of Industrial Organizers (AFL-CIO) due to a dispute over declining membership numbers and AFL-CIO’s alleged resistance to change. James Hoffa said that the labor movement needed “more union members in order to change the political climate that is undermining workers’ rights in this country,” and claimed that “the AFL-CIO has chosen the opposite approach.” AFL-CIO president John Sweeney called the decision a “grievous insult” to rank-and-file workers, and said that “a divided movement hurts the hopes of working families for a better life.” [15]

The SEIU- and Teamsters-led faction, known as Change to Win, largely failed to reshape the American labor union movement, with many former Change to Win member unions returning to the AFL-CIO. As of 2020, Change to Win brands itself as a “strategic organizing center” led by Hoffa. [16]

In 2011, Hoffa gave a speech in Detroit in support of re-electing President Barack Obama. In his speech, he accused the grassroots conservative Tea Party movement of waging a “war on workers” and claimed that working people “like a good fight.” He then said that “there’s only going to be one winner” and “we’re going to win that war.” He concluded by reminding the largely union-activist crowd that “everybody here’s got a vote” and encouraging his audience to “take these sons of bitches out and give America back to an America where we belong.” [17]

Tea Party groups called Hoffa’s language “inexcusable” and accused him of issuing “a call for violence on peaceful Tea Party members.” The Tea Party Nation and Tea Party Express called on President Obama to “strongly rebuke Hoffa for his dangerous comments.” Republican presidential candidates Rick Perry and Herman Cain also condemned Hoffa’s rhetoric. Obama White House Press Secretary Jay Carney responded by stating that the comments were Hoffa’s own and that President Obama was not on stage at the time. Hoffa himself said his remarks were misconstrued and that he “will never apologize for standing up for my fellow Teamsters and all American workers.” [18]

In 2016, WikiLeaks released Clinton campaign emails revealing that members of the Teamsters, an affiliate of North America’s Building Trades Unions, opposed NABTU’s endorsement of Clinton, even while Hoffa himself had endorsed her. The emails revealed that campaign staff were concerned about leaks from Teamsters members, as well as from the Boilermakers Union, another NABTU affiliate which had opposed endorsing Clinton. Scott Hagerstrom, the Trump campaign’s Michigan director, responded to the leaks by accusing Clinton of trying to “silence rank and file union members with strong arm tactics,” though he did not specify which of her actions he considered to be coercive. [19]