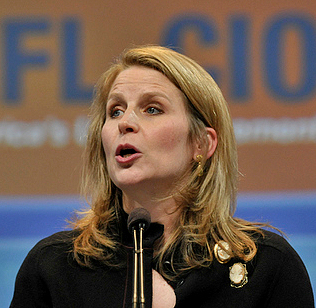 Elizabeth H. Shuler is an American labor union official who assumed the presidency of the AFL-CIO after the death of Richard Trumka.[1] She is a career union activist, having started her career as a local union organizer and political director for a local of the International Brotherhood of Electrical Workers (IBEW) before rising to the post of AFL-CIO secretary-treasurer in September 2009.

Due to her position with the AFL-CIO, Shuler sits on a number of boards of left-labor activist groups including Alliance for Retired Americans, the AFL-CIO Solidarity Center, and the Working for America Institute.

Shuler started her career early on as a political activist and local union organizer, where she began pushing left-progressive labor initiatives including environmentalist jobs programs. [4]

In 1997, as the state legislative and political director for the International Brotherhood of Electrical Workers (IBEW) Local 125, Shuler lobbied against a bill to deregulate the electricity market in Oregon. [5]

At the AFL-CIO, Shuler chairs the Executive Council Committee on Finance, and serves on the board of the Housing Investment Trust, as well as the Women’s Committee of the International Trade Union Confederation. [6]

Shuler leads the AFL-CIO’s initiative to recruit younger workers, women, immigrants, and people of color into unions, by attempting to show that there is diversity in the labor movement. [7] Shuler served as the former head of the Asian Pacific American Labor Alliance (APALA)’s Education Fund’s Young Leaders Council, in an effort to engage with and recruit people under 35 to unions. [8]

Shuler was a panelist at the 2009 National Asian Pacific American Workers’ Rights Hearing, an event sponsored by APALA, the AFL-CIO, and other pro-union organizations. Workers who spoke at this hearing, largely immigrants, claimed to be exploited, and to be struggling for the right to become a union member. [9]

Shuler was also a panelist at APALA’s 11th biennial convention. Held in 2011, the convention was themed “Generations United: Our Jobs, Our Rights, Our Future!,” and focused on engaging youth, and highlighting immigration within the labor movement. Other speakers at this event included union officials including Lee Saunders, Mary Kay Henry, and Art Pulaski. [10]

In 2010, along with Senator Elizabeth Warren (D-MA), Shuler was awarded the Transforming America Award by Demos,[11] a left-wing public policy advocacy group that favors and advocates for a staunchly liberal agenda. [12]

Shuler was a featured panelist at the 2010 “Labor, the Left and the Obama Era” discussion hosted by the Kalmanovitz Initiative, Dissent magazine, The Nation, and the American Prospect. Other panelists at this event included left-wing author Barbara Ehrenreich, liberal MSNBC talk-show host Chris Hayes, labor-unionist writer Harold Meyerson, Gerry Hudson, and Michael Kazin. [13]

Shuler has been a featured speaker at Netroots Nation,[14] an annual convention that amplifies the efforts of liberal bloggers and online activists. [15]

Shuler promotes and supports women in politics by serving on the boards of the Women’s Campaign Fund, and Women’s Policy, Inc., and is a former volunteer for the International Women’s Democracy Center. [16]