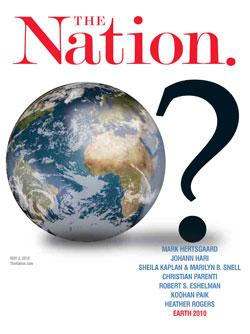 Cover of the May 3, 2010 issue of the political magazine The Nation (link)

The Nation is the oldest weekly magazine in the United States. It was initially founded as a classical liberal magazine but as the liberal movement has evolved, it steadily became a more left-progressive or social-democratic magazine. In the first half of 2016, it had 110,007 subscribers, more than 30,000 fewer than the conservative National Review.[1] The magazine has also aligned with the interests of Vladimir Putin in the modern Russian Federation, including after the Russian dictator’s invasion and seizure of Ukrainian territory in the Crimea and parts of Donbass in late 2014.[2]

The Nation considers itself the successor to William Lloyd Garrison’s anti-slavery newspaper, The Liberator. It was founded on July 6, 1865 as a magazine that covers politics, arts, and books. According to its Founding Prospectus, “The Nation will not be the organ of any party, sect, or body.”[3] Garrison was an original contributor to the magazine.

The first publisher of the magazine was Joseph H. Richards. The first editor was Edwin Lawrence Godkin, an Irish immigrant who worked as a reporter in London and for the New York Times. The magazine first gained notoriety for publishing accounts from the war-torn South. Those articles, written by John Richard Dennett, featured interviews with former slaves, Confederate veterans, and other ordinary people he met during his travels.

Back then, The Nation was supportive of things such as a strong national currency and free trade, in line with the classical liberal thinking of the time. It also believed in a professional civil service instead of political patronage.

The Nation was bought by Henry Villard in 1881. His son, Oswald Garrison Villard, would inherit the magazine from his father in 1900. It was then that the magazine would shift its political orientation from supporting a smaller government to supporting a larger one. Villard and The Nation would support the nationalization of industry and the New Deal.

The magazine was also supportive of the new Soviet Union. It published a eulogy of Soviet state founder Vladimir Lenin by Russian writer Maxim Gorki, who called the Soviet leader “the hero of a legend, a man who had torn the burning heart out of his breast in order to light up for mankind the path which shall lead it out of the shameful chaos of the present.”[4]

During the Cold War, the magazine became a home for some Soviet apologists. In 1946, Walter Duranty, the New York Times Moscow bureau chief who won the Pulitzer Prize but later became infamous for having covered up the famine in Ukraine orchestrated by Joseph Stalin, praised Stalin’s purges in the pages of The Nation. He called them “a general cleaning out of the cobwebs and mess which accumulate in any house when its occupants are so deeply preoccupied with something else that they have no time to keep it in order.”[5]

The magazine praised Stalin when he died in 1953.[6] The magazine also contributed to efforts to exculpate Alger Hiss, a State Department official convicted of perjury related to his activities as an agent of the Soviet Union. Even after the declassification and publication of decrypted intercepts that proved Hiss spied for the Soviets, then-Nation publisher Victor Navasky continued to assert Hiss’s innocence.[7]

The Soviet Union was not the only communist state for which The Nation offered cover. Its pages covered up the crimes of Chinese dictator Mao Zedong and his new People’s Republic of China. An editor, Maxwell Stewart, was the chairman of a communist Chinese front group.[8]

During the Greek Civil War, The Nation’s editor, Freda Kirchwey, praised the Greek communist guerillas. During her tenure, The Nation also endorsed friendship with the Soviet Union and opposed the Cold War.[9]

But it was not until the 1970s that The Nation published its most infamous example of “whataboutism”—dismissing Communist crimes by claiming American misdeeds–of a communist regime. In 1977, it published “Distortions at Fourth Hand” by Noam Chomsky and Edward S. Herman. In the article, both men denied that a genocide was taking place in Khmer Rouge-controlled Cambodia even as evidence from refugees was indicating killings on a mass scale.[10] Estimates of the death toll from the genocide exceed 1.5 million people.[11] The United Nations would ultimately conclude that the Khmer Rouge regime had committed genocide, and a joint UN-Cambodian tribunal would sentence three surviving Khmer Rouge officials to life imprisonment.[12]

The current editor and publisher is Katrina vanden Heuvel, who has been with the magazine since the late 1980s when she served as the magazine’s correspondent in the Soviet Union. It is affiliated with The Nation Institute, a nonprofit media organization. The institute publishes books under the label Nation Books. Vanden Heuvel is married to Stephen F. Cohen, a Russia scholar and contributor to The Nation who has been criticized for his friendliness to the Vladimir Putin regime.[13]

The magazine is supported by donors, subscriptions, and commercial advertising. The donors are called The Nation Builders and they generate 20 percent of the magazine’s overall revenue.[14] Among the donors to The Nation Institute is the Ford Foundation, which has given at least $1.2 million since 2010.[15] The Institute has also received support from George Soros through the Open Society Foundations.[16]

In keeping with the tradition of praising authoritarian leftist leaders, The Nation frequently praised Venezuelan dictator Hugo Chavez on its pages. In 2005, Christian Parenti wrote a feature article about Chavez and his rule in Venezuela that included accolades for his social achievements.[17] In 2009, the magazine conducted an interview with Chavez.[18] When Chavez died in 2013, the magazine ran several stories praising his time in office. One eulogy by Greg Grandin suggested Chavez was “not authoritarian enough.”[19] Another infamous article that ran was Grandin’s “The Audacity of Hugo” in praise of Chavez’s socialist revolution.[20]

The Nation also heaped praise on Fidel Castro’s regime in Cuba. The magazine hailed Cuba for everything from its supposed low infant mortality rates to its attitudes on sex and held an “educational exchange trip” with the island gulag state before President Obama controversially normalized diplomatic relations.[21]

The Nation’s modern day Russia coverage has been criticized as too pro-Putin. Stephen F. Cohen, who is the husband of editor and publisher Katrina vanden Heuvel, has been characterized as a Putin apologist.[22]  Cohen has been a supporter of closer relations between the U.S. and Russia and at times has defended Russian actions in Ukraine, at one point denying the nation of Ukraine exists.[23]