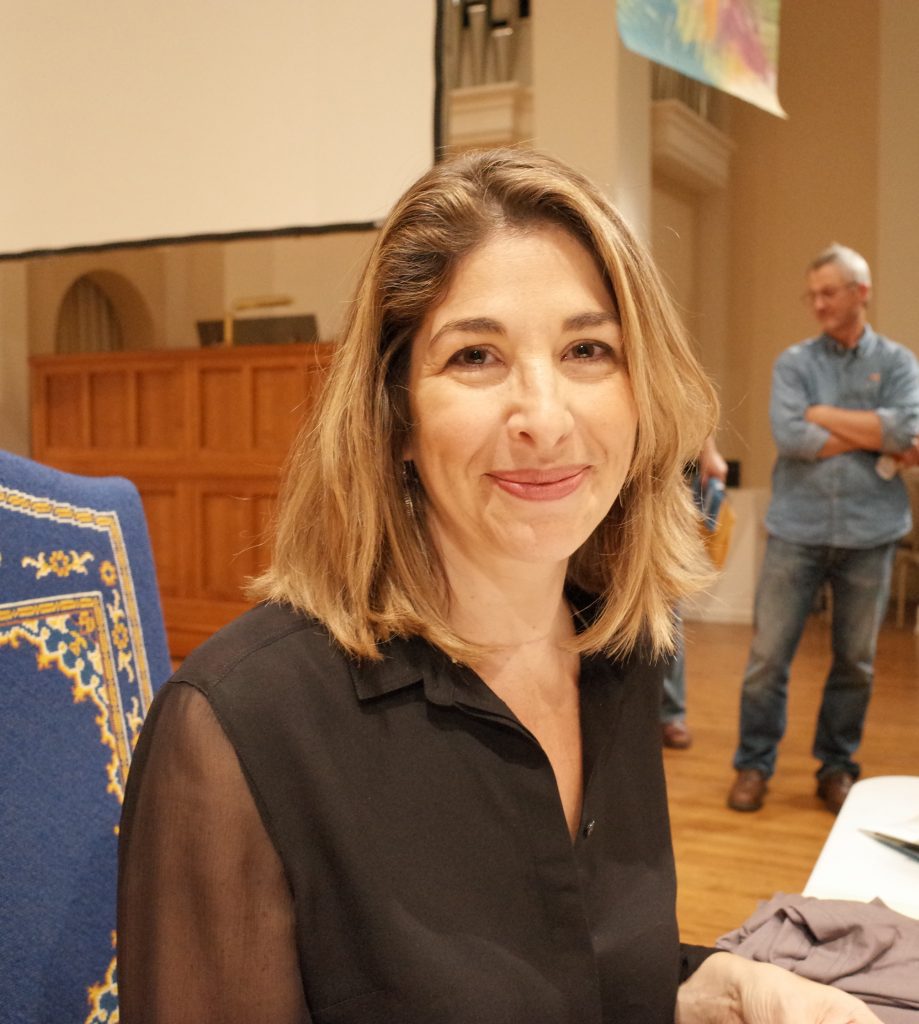 Naomi Klein is a prominent Canadian activist, syndicated columnist, and author of four books. She is a Writing Fellow at the Nation Institute and contributing editor for The Nation magazine. She has written articles for Harpers, The New York Times, The New Yorker, The Boston Globe, The Guardian, Rolling Stone and others.[1] As of 2017, she also writes for The Intercept, a publication focusing on investigative journalism supported by eBay founder and philanthropist Pierre Omidyar, funder of the Omidyar Network.[2]

Klein was born into a family with multi-generational ties to the radical Left. Her grandparents, Anne and Philip Klein were secret communists in the 1930s and 1940s. Philip’s brother Sol, also a hardcore Communist, relocated permanently to the Soviet Union.[3] Philip worked as an animator for Disney studios but was fired for being an agitator in a 1941 strike against Disney.[4] Anne and Philip, however, became disillusioned with Soviet Communism after the Molotov-Ribbentrop Pact which made Hitler and Stalin allies. They left the Communist Party but remained committed far-leftists, marching on behalf of convicted Soviet spies Julius and Ethel Rosenberg and canvassing for the pro-Soviet Progressive Party in the 1948 Presidential election.[5]

Naomi is married to Avi Lewis, a prominent leftwing broadcaster who has produced and hosted shows for Al Jazeera, among others, and co-produced a documentary on Argentina, The Take, with Klein.[8] Lewis also heralds from a radical Left family. His great-grandfather, Moishe Losz, was a member of Russia’s socialist Jewish Bund. He fled Europe in 1921 for Canada where he anglicized his name to Lewis. Moishe’s son David helped found Canada’s socialist New Democratic Party (NDP), and his grandson, Stephen became provincial leader of the NDP for Ontario.[9] The NDP is allied with the Socialist International[10] and the Progressive Alliance.[11] It holds 44 of 338 seats (13 percent) in Canada’s House of Commons.[12] Stephen was married to left-wing feminist writer Michele Landsberg, and they had three children including Avi.[13]

Klein’s brother, Seth, directs the British Columbia office of the Canadian Centre for Policy Alternatives (CCPA), and helped found that office in 1986.[14] The CCPA advocates left-wing policies on a broad array of social and environmental issues. Seth helped launch British Columbia’s Living Wage for Families Campaign.[15] BC CCPA is listed on the Campaign’s advisory board along with the British Columbia branch of ACORN Canada, the Canadian Labour Congress trade union federation, numerous public employee unions, and others.[16]

At the CCPA website, under the heading Support Our Work, Naomi has provided a pitch for the CCPA:

We need the CCPA to remind us that our dreams of a decent, egalitarian society are reasonable — indeed that with a little work, they are practical.  And I love that practicality, that protection of the dream of the possible.[17]

Klein began writing first as a student at the University of Toronto, where she edited the student newspaper, The Varsity.[18] She never completed school, dropping out first to care for her ailing mother then to write for The Globe and Mail, This Magazine and others.[19] [20]

Klein’s first three books, No Logo (2000), The Shock Doctrine: The Rise of Disaster Capitalism (2007), and This Changes Everything: Capitalism vs The Climate (2014) were best-sellers and have been translated into more than 25 languages.[21] The Washington Post has referred to them as “a trilogy of left-wing, anti-globalist manifestos.”[22]

Klein’s first book, No Logo, is a critique of consumerism and the power of name brands. It has been described as “the Das Kapital of the growing anti-corporate movement.”[23]

The thesis of her book, The Shock Doctrine, is that free market capitalism has survived only with the use of violence over the past 30 years. In an interview with the Socialist Review, Klein says of capitalism, “This is a war, this is a very real battle and there are very real casualties.”[24]

In the Literary Review of Canada, reviewer Leslie Campbell wrote of Shock Doctrine:

[It] furthers the raison d’etre for the anti-globalization movement by attempting to link recent wars, the aftermath of natural disaster, economic collapse in the developing world and draconian responses to terrorism to a sinister strategy developed by the late University of Chicago economist Milton Friedman and his acolytes.[25]

In This Changes Everything, Klein argues that with the onset of global warming, the world can no longer survive under a free market, capitalist regime. In a 2014 interview about her book she said capitalism “is increasingly a discredited system, because… it is seen as a system that venerates greed, umm, above all else… this economic system is failing the vast majority of people, and destabilizing the planet… [and] is also waging a war on the planet’s life support systems.”[26]

In the interview she evaded discussions of capitalism versus socialism, instead proposing a “justice based” economic system. She said, “I think we might be able to come up with an economic system that is ecologically rooted that is better than anything we’ve tried before.”[27]

In 2004, however, Klein signed a petition titled “We would vote for [former Venezuelan dictator] Hugo Chavez.”[28] She has since written glowingly of Venezuela under Chavez, Bolivia’s Evo Morales, Argentina’s Kirchners and the leftist leader of Ecuador, Rafael Correa, whom she congratulated for throwing the U.S. military out of the country.[29]

Klein’s latest book, released in June of 2017, is titled No Is Not Enough: Resisting Trump’s Shock Politics and Winning the World We Need. Klein states:

“Trump is not a rupture at all, but rather the culmination — the logical end point — of a great many dangerous stories our culture has been telling for a very long time. That greed is good. That the market rules. That money is what matters in life. That white men are better than the rest. That the natural world is there for us to pillage. That the vulnerable deserve their fate and the one percent deserve their golden towers. That anything public or commonly held is sinister and not worth protecting. That we are surrounded by danger and should only look after our own.”[30]

Following the 2014 publication of This Changes Everything, Klein’s website bio states that “her primary focus has been on putting its ideas into action.”[31] But she has been actively involved in leftwing policy advocacy for much longer.

350.org has numerous affiliates in many countries across the globe. Klein brags that, despite its small size, 350.org has coordinated 15,000 rallies in 189 countries over the past three years.[33] In 2011, 350.org merged with 1Sky Education Fund, another environmental activist group with similar goals. 1Sky’s initial board of directors included former President Obama’s Green Energy Czar, Van Jones.[34] Klein explained the merger:

“Since we’re never going to have as much money as the fossil fuel industry, we need to rebuild the kind of mass movement that marked 1970: bodies, passion, and creativity are the currencies we can compete in… 1Sky was founded in the same spirit, and at the same time, as 350.org, and has worked to develop leaders around the country and help build a base of hundreds allies.  Together, we’ll be smarter, bolder, faster, and more creative than we were before.”[35]

Klein helped launch the Leap Manifesto, a document calling for “a Canada Based on Caring for the Earth and One Another.” Under the pretense of reversing global warming the manifesto calls for reshaping society along socialist lines.[36] The Manifesto states, in part:

We could live in a country powered entirely by renewable energy, woven together by accessible public transit, in which the jobs and opportunities of this transition are designed to systematically eliminate racial and gender inequality. Many more people could have higher wage jobs with fewer work hours, leaving us ample time to enjoy our loved ones and flourish in our communities.

We know that the time for this great transition is short. Climate scientists have told us that this is the decade to take decisive action to prevent catastrophic global warming. That means small steps will no longer get us where we need to go.[37]

Klein and her husband were two of the Leap Manifesto‘s 48 initiating signatories.[39] Initiating organizations include Black Lives Matter Toronto, 350.org, Greenpeace Canada, No One Is Illegal – Vancouver, Oxfam Canada and other like-minded groups.[40] Canada’s New Democratic Party adopted Leap Manifesto principles last April at its annual convention, despite many pleas from some of its members who rely on the carbon energy industry for survival.[41]