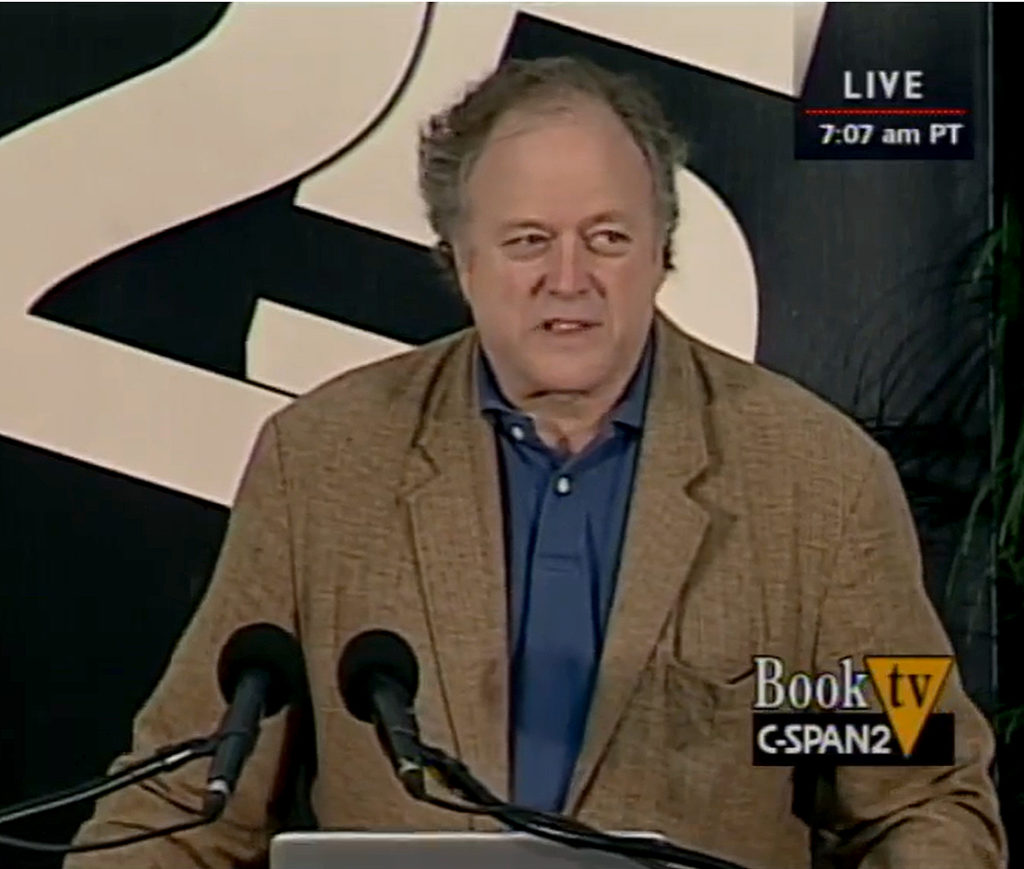 Hamilton “Ham” Fish V is a liberal activist who has financially supported or published numerous liberal political journals, including The Nation, the New Republic, and the Washington Spectator. In November 2017, Fish resigned as publisher of the New Republic following allegations that he had sexually harassed female employees.[1] According to a HuffPost report, Fish had a long history of mistreating women, most notably an incident at the Nation Institute, a nonprofit supporting liberal journalistic efforts, where he had allegedly choked a female executive.[2]

Fish is generally credited with purchasing and restoring the defunct liberal publication the Nation. [3] Under his watch, the publication continued to stake out political positions “to the left of the national consensus.”[4] Fish served for more than a decade as the President of the Nation Institute, a journalism-centric non-profit supporting the liberal reporters in both mainstream and openly partisan outlets.[5] After departing the Nation Institute, Fish served as publisher of The New Republic from 2016 until the allegations of his misbehavior surfaced.[6] He also served as publisher of the Washington Spectator; the magazine’s website continues to refer to him in that capacity as of January 2018.[7]

Fish V has served as a political adviser to liberal billionaire and financier George Soros and a board member of Soros’ Open Society Institute (now the Open Society Foundations). In 2000, he joined with left-of-center blogging magnate Arianna Huffington to produce a sponsored “shadow” convention during the 2000 Republican National Convention featuring “left-wing GOP-bashers” like Ben and Jerry’s co-founder Ben Cohen and comedian and future U.S. Senator Al Franken (D-Minnesota).[8]

Hamilton Fish V comes from a longstanding political family: Hamilton’s ancestor Nicholas Fish fought with George Washington in the American Revolution and ran for Congress in 1800 as a Federalist. His son, the first Hamilton, ran for Congress in 1842 as a Whig, served as Governor of New York,[9] and as Secretary of State to President Ulysses S. Grant.[10] Fish V’s grandfather and father were both Republican U.S. Representatives, with his father representing New York until 1994. [11]

In college at Harvard, Fish became active in the movement opposing the Vietnam War. Fish dropped out of Harvard in 1971 to form the National Movement for the Student Vote to register voters under the newly enacted 26th Amendment, which allowed 18-year-olds to vote. [12]  (He later returned to Harvard, graduating in 1974.[13])

Fish raised money for the unsuccessful U.S. Senate campaign of Johnson administration Attorney General Ramsey Clark, a liberal Democrat, in 1974, and for the Moreland Commission, a New York state panel that investigated nursing home scandals in the early 1970s.[14]

Fish has produced several documentary films. He was a co-producer in 1975 of The Memory of Justice,’ a documentary based on the Nuremberg Trials. In 1985 he co-executive-produced Hotel Terminus, a documentary on the life of Nazi war criminal Klaus Barbie which won the Academy Award for Best Feature Documentary in 1989. [15]

Fish waged two unsuccessful campaigns for United States Congress as a Democrat from Westchester County, New York, in 1988 and then again in 1994 from Putnam County, New York. [16] During his 1988 campaign, he staked out an array of leftist positions that; called for Democrats to replace “the phony Republican war on drugs;” supported an increase in government funding for public and private day care; and called for socialized “catastrophic health-care coverage.” He also complained that defemse spending consumed to much of the budget shortchanging domestic programs. [17] Fish’s 1994 campaign was endorsed by a number of left-wing organizations including the Westchester Coalition for Legal Abortion, the New York League of Conservation Voters, the National Organization for Women on both the state and national level and the New York State A.F.L.-C.I.O. [18] He lost a Democratic primary in 1988 and the general election in 1994.

In 1977, with partner Victor Navasky and a group of about 50 other investors, then 26-year old Hamilton Fish V raised more than $950,000[19] to purchase The Nation Magazine, which has been described as “a mainstay in liberal journalism for more than a century.”[20] Fish V served as the Magazine’s publisher and Navasky, a former editor of the New York Times Magazine, served as its editor.

During this time, Fish V also helped to create the National Writer’s Union, a member of the United Auto Workers and the AFL-CIO. [21]

Fish is generally credited with revitalizing The Nation.[22] Under his watch, it grew its readership slightly and never earned a profit, losing about half a million dollars a year.[23]

In 1985 Fish sold the magazine to Wall Street investor Arthur L. Carter, who had agreed to pay off the magazine’s $2 million in accumulated debts.[24] Fish V retained a 10% stake in the magazine[25] and remained as publisher until 1987. [26]

From 1995 through 2009, Fish served as president of The Nation Institute, the Nation’s associated nonprofit arm supporting liberal journalism projects.[27]

According to Fish V under his watch the Nation Institute administered a journalism fellowship program for progressive reporters to inject their leftist writings into both mainstream and alternative media sources and distributed three major award programs for progressive reporting. [28] Additionally, through the Nation Institute Fish V created and sponsored TomDispatch.com, a liberal political commentary website and listserv written by left-wing commentator Tom Englehardt.[29]

According to a HuffPost report, Fish’s eventual 2009 departure from the Nation Institute was spurred by a staff revolt against him for failing to do his job ― which largely consisted of raising money for the nonprofit organization. HuffPost also alleged that Nation Institute staffers were also disgusted with the way he treated female employees.[30] Fish disputed this account of his departure from the organization saying that he left on his own terms over low funding and board disputes.[31]

In 2000, Fish V co-founded and served as a publisher for Nation Books,[32] created as part of the Nation Institute that would publish books on politics, culture and history reflecting the liberal principles of the Nation magazine.[33]

Nation Books titles include Taking Back America: And Taking Down the Radical Right by Vanden Heuvel and Robert Borosage, The Bush-Hater’s Handbook: A Guide to the Most Appalling Presidency of the Past 100 Years edited by Jack Huberman, Warrior-King: The Case for Impeaching George W. Bush by John C. Bonifaz, Imperial America: Reflections on the United States of Amnesia by Gore Vidal, and Right Wing Justice: The Conservative Campaign to Take Over the Courts by Herman Schwartz.[34]

Since 1994, Fish V has served as president of the Public Concern Foundation, which published the Washington Spectator, a monthly political publication. He personally highlighted an array of the publication’s recent left-leaning politically charged articles on President Trump’s proposed border barrier in a Texas wildlife refuge; the impact of the oil and gas industry on the Louisiana coastline; alleged suppression of the minority, student and immigrant vote in Georgia; chemical plant safety and alleged carcinogens in plastics; and the 2017 People’s Climate March in New York City.[35]

According to Ari Berman, a senior reporter at Mother Jones and a fellow at The Nation Institute, “A lot of people heard rumors about Ham’s behavior but felt powerless to do anything about it […] He was a powerful person who was being protected.”[36]

As news of Fish’s original suspension spread, HuffPost reported that employees who served under him at his former employer, liberal journalism nonprofit the Nation Institute, had sent private warnings to women at the New Republic “that their incoming boss was trouble.”[37] At least one current Nation staffer emailed Katrina Vanden Heuvel, the editor and publisher of The Nation, and asked her to tell New Republic owner Win McCormack about the circumstances under which Fish had left the Institute.”

According to HuffPost’s report, Fish allegedly grabbed the neck of a high-ranking female Nation Institute employee. HuffPost recounted, “Fish V, who is well over 6 feet tall, approached [Taya Kitman, a high-ranking Nation Institute staffer] from behind, put his hands around her neck and applied pressure, according to four people with knowledge of the incident…He left red marks on Kitman’s neck.”[38]

In response to HuffPost’s report, Fish V denied wrongdoing. He also brushed off other claims as being motivated by malice toward him or ill will toward The Nation Institute.[41]

In late 2017, Hamilton Fish V was suspended and later resigned from as publisher of the New Republic following allegations of inappropriate behavior toward female subordinates.[42] Fish’s name had reportedly previously appeared on an “unverified, crowd-sourced spreadsheet of ‘[S**tty] Media Men’” that circulated online following  sexual-assault allegations against prominent Hollywood producer Harvey Weinstein.[43] Fish also took a leave of absence from his duties as president and trustee of the Desmond-Fish  Library.[44]

According to the HuffPost report citing two of Fish V’s New Republic colleagues, “Fish would approach women from behind, put his hands on their shoulders, sometimes massaging them.” HuffPost sources further alleged, “He would generally make dismissive jokes and physically leave the room when I [a former New Republic staffer] brought up problems.’” [45]

His action prompted female staffers at the magazine to draft a complaint detailing their grievances, which was signed by editorial staffers and delivered to top management. Shortly thereafter, the magazine’s owner McCormack announced an internal investigation into Fish’s conduct and that he would be taking a leave of absence. [46]

In 2000, Hamilton Fish V was a political adviser to liberal billionaire and financier George Soros and he sat on the board of Soros’ Open Society Institute (OSI), now the Open Society Foundations. In this role Fish V worked with Soros and left-wing blogger Arianna Huffington to plan a “shadow” convention held in Philadelphia during the Republican National Convention featuring “left-wing GOP-bashers” such as Ben and Jerry’s co-founder Ben Cohen and comedian and later U.S. Senator Al Franken (D-Minnesota).[47]

The “shadow” convention also featured Soros’s other liberal sub-organizations. For instance, the Lindesmith Center in New York, regarded as Open Society Institute’s drug-policy arm that lobbied for needle exchanges and medicinal marijuana, was said to be playing a direct role in the shadow convention to make sure “the drug war comes under attack.”[48]

Three years earlier, Fish had defended Soros claiming that he was “not a traditional leftist,” but rather “a humanitarian who’s very concerned about the way a growing number of people in America, from prisoners to legal immigrants, are being disenfranchised.”[49] In 1999 Soros’ Open Society Institute gave a $50,000 grant to Fish’s Nation Institute.[50]

Hamilton Fish III, a staunchly conservative Republican former U.S. Representative from New York, labeled his grandson Hamilton Fish V a ”leftist” who picked up his political leanings at Harvard University[51] and at one point the elder Fish labeled his grandson a communist.[52] Fish V attributes the 1960s era of rebellion and protests, as well as his opposition to the Vietnam War and support for civil rights, as the reasons why he opted to become a Democrat and shun his family’s four-generation history in the Republican Party.[53]

Fish V is often described as an environmentalist.[54] He has stated, “I think it’s pretty clear from my perspective that there’s not only a rampaging issue of climate change but a pretty concerted campaign under way to deny the issues associated with climate change and especially being conducted by interests that have a very small agenda.”[55]

In December 2016, Fish V penned an article entitled “How Trump Ruined Christmas” calling the election of President Donald Trump a “calamity” that he hoped would be the catalyst that pushed America to move to the left on identity politics and environmentalism.[56]