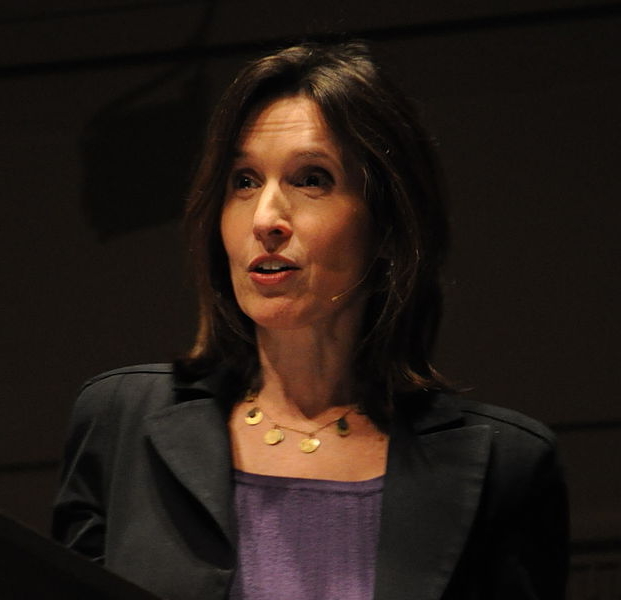 Katrina vanden Heuvel is the part-owner and served as the editor of the left-wing magazine The Nation from 1995 to 2019. [1] She is a commentator for media outlets including CNN and the New York Times, as well as writing a weekly column in the Washington Post. [2]

For her work at The Nation, Vanden Heuvel has received awards from Planned Parenthood and the ACLU of New York. [3]

Vanden Heuvel has written for the left-wing magazine The Nation since the late 1980s, when she joined to work as the magazine’s correspondent in the Soviet Union. In 1995, vanden Heuvel joined other investors to buy The Nation and was named editor-in-chief of the magazine. [4] A host of left-wing groups have recognized vanden Heuvel for her role in progressive journalism including the National Women’s Political Caucus, New York Civil Liberties Union, Center for Community Change, and Progressive Congress. [5]

The Nation has been criticized for praising radical-left regimes during vanden Heuvel’s tenure as editor. Venezuelan socialist dictator Hugo Chavez was frequently featured in a positive light by the publication. Articles gave him accolades for social programs he founded,[6] lauded his socialist revolution, and claimed Chavez was “not authoritarian enough.” [7] The magazine has also praised the Castro regime in Cuba and used communist propaganda statistics. [8]

Vanden Heuvel is married to Stephen F. Cohen, a Russia scholar and contributor to The Nation who has been criticized for his friendliness to Vladimir Putin’s regime. Cohen has been called “Putin’s American Apologist” by the left-of-center opinion journal The New Republic. [9] In a 2014 interview on CNN, Cohen denied Putin was a “rank dictator,” said “Putin is not a thug,” and stated Putin’s goal is “to restore Russia from the disaster of 1991”; namely, the collapse of the Soviet Union. [10]

In a Washington Post column, vanden Heuvel advocated for bringing the Green New Deal (GND) to a vote to showcase “who on the Democratic side is prepared to stand up and who is not.” [11] The GND is an environmentalist policy package characterized by critics as a “radical, top-down, socialist makeover of the entire U.S. economy.” [12]

In an article for The Nation, Vanden Heuvel praised the New York state legislature for increasing rent regulations, giving drivers licenses to illegal immigrants, and a supporting Green New Deal-style legislation. [13] She specifically praised legislators aligned with the left-wing Working Families Party (WFP). Labor unions historically backed the WFP, and socialist U.S. Senator Bernie Sanders (D-VT) labeled WFP “the closest thing there is to a political party that believes in my vision of democratic socialism.” [14]

Vanden Heuvel has backed Senator Elizabeth Warren’s (D-MA) “wealth tax” proposal which would raise taxes on 75,000 households. [15] Legal experts have debated whether or not such a tax is unconstitutional. [16]

Vanden Heuvel serves on the boards of left-wing groups including Institute for Policy Studies, Campaign for America’s Future, and the Franklin and Eleanor Roosevelt Institute. [17]

In 2015, after congressional Republicans opened an investigation into Planned Parenthood following the release of video recordings that appeared to show officials working for Planned Parenthood selling fetal tissue and organs to researchers, vanden Heuvel wrote a piece in the Washington Post titled “The War on Planned Parenthood,” labeling the congressional inquiries and proposals to remove public funding from the massive liberal advocacy group as an “existential threat to the pro-choice movement.” [20]