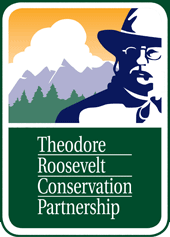 This is a logo for Theodore Roosevelt Conservation Partnership. (link)

Theodore Roosevelt Conservation Partnership (TRCP) promotes left-of-center conservationist and environmentalist policies. A membership organization of hunters and fishers, it is dedicated to promoting federal control of public lands and opposing expanded oil and gas production in the United States. The organization also has ties to organized labor and the AFL-CIO and in 2007 launched the Union Sportsmen’s Alliance to “lure the political allegiance of gun-owning union members away from the NRA [National Rifle Association] and its political agenda.” [1] [2] [3] [4]

Theodore Roosevelt Conservation Partnership was founded in 2002. The group campaigns to preserve public lands and natural resources so that they may remain available for sportsmen. The group also supports restrictions on industries including enhanced restrictions on public land leases for oil and gas operations and limits on commercial fishing.

TRCP supports federal laws like the Clean Water Act, which strengthen the powers of the Environmental Protection Agency (EPA). TRCP calls the Clean Water Act “wildly successful” and advocated that the Biden administration reverse Trump administration changes to the enforcement of the act, in order to provide the EPA with enhanced powers to interpret and enforce the act. [5]

TRCP opposes efforts from right-of-center groups and politicians to facilitate the transfer of federally controlled lands to state governments. The organization lobbies state and local officials to oppose such land transfers, citing claims that the state would not be able to fund land management and that the tourism industry would be harmed by transferring public lands that are part of or tangential to national parks. [9]

TRCP also supports the Biden administration’s efforts to increase regulations around the leasing of public lands for oil and gas operations. The organization supported changes announced by the Bureau of Land Management that recommend increased scrutiny of leasing applications and recommended a 33 percent increase on the lease royalty fee, raising it from 12.5 to 18.75 percent. [10]

The organization also supports increased regulations and limits around commercial fishing, such as drastically limiting the harvest of menhaden, a small fish harvested for fish oil. [11]

Theodore Roosevelt Conservation Partnership has stated that the impacts of climate change include “steady habitat loss” and “are undeniable and must be addressed.” The organization also applauded the Biden administration’s overall goal of limiting fossil fuel use while expressing hesitation around plans to increase the construction of wind turbines and solar farms on federal lands, citing the potential to harm bird species and disrupt migratory patterns of big game species. The organization formed a project with Trout Unlimited and the National Wildlife Federation called Sportsmen for Responsible Energy Development, which has called on the Biden administration to solicit feedback from sportsmen in its plans to increase wind and solar projects. [12]

Despite being an organization focused on hunting, Theodore Roosevelt Conservation Partnership has declined to take a stance on gun policy. A 2013 article by president and CEO Whit Fosburg stated that “others know far more than we do about the Second Amendment, not to mention school safety, the mental health system, weapons trafficking and other key components of the gun-violence debate today.” Fosburg further stated that TRCP would continue to focus on public land and other conservation issues as opposed to engaging in the debate around gun policy. [13]

Theodore Roosevelt Conservation Partnership has long been affiliated with the labor movement. The organization’s list of partner organizations includes the AFL-CIO and the organization’s policy council includes Tom Trotter, a legislative affairs staff member for that union federation. [14]

In 2007, TRCP worked with several national labor unions and the AFL-CIO to launch the Union Sportsmen’s Alliance. Now an independent organization closely affiliated with TRCP, the alliance was formed to galvanize opposition to the George W. Bush administration’s increased permitting of drilling on public lands that conservation groups decried. The Washington Post described the organization as an attempt to increase blue collar union membership and “lure the political allegiance of gun-owning union members away from the NRA [National Rifle Association] and its political agenda.” One union official, Harold Schaitberger, president of the International Association of Fire Fighters, stated that the group was formed because “We know that the NRA is communicating to our members what clearly are anti-union positions and urging them to support anti-union candidates.” Then-AFL-CIO president Richard Trumka was an “enthusiastic” supporter of the alliance’s formation and stated that around 33 AFL-CIO unions would join soon after its formation. [15]

Whit Fosburg, the longtime president and CEO of the TRCP, currently sits on the board of directors of the Union Sportsmen’s Alliance. [16]