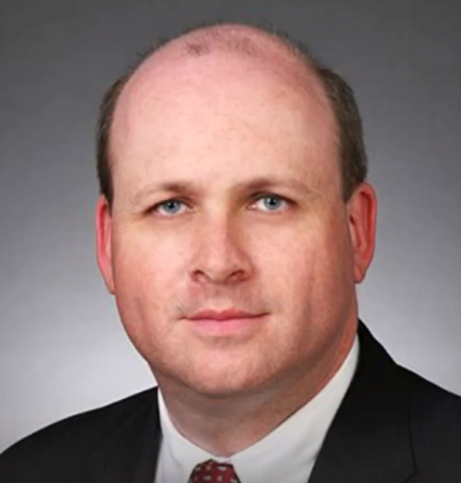 Marc Elias is an American attorney best known for his involvement in Democratic Party political campaigns and election litigation. He is a partner at the law firm Perkins Coie LLP and head of its Political Law practice, which assists Democratic political committees and other left-of-center clients. He was the general counsel for Hillary Clinton’s 2016 presidential campaign, and for John Kerry’s 2004 presidential campaign.[1]

Elias is the lawyer of choice for Democratic politicians in very close races that require a recount or other post-election litigation.[2] He represented Democrat Al Franken during the 2008 U.S. Senate race in Minnesota, helping bring about a 312-vote victory when initial counts shortly after polling had closed showed Franken trailing incumbent Republican U.S. Senator Norm Coleman by 215 votes.[3]

He is credited with helping create the so-called “super PAC” and with pioneering other methods of expanding the freedom of donors to contribute larger amounts to federal political committees.[4] This has led to criticism from left-wing advocacy organizations seeking to restrict spending on political speech. In 2018 a representative of Common Cause implied Democrats are hypocritical for telling voters the party favors campaign finance restrictions, but then paying Elias and his firm to “deregulate money in politics behind the scenes.”[5]

Shortly before the 2016 election, billionaire left-wing donor George Soros gave at least $5 million to Elias and his firm to challenge what left-wing activists allege to be restrictions that deter Democrats and left-wing constituencies from voting, such as photo identification requirements at polling places.[6] In early 2017, Elias joined the board of Priorities USA as it was announced that the organization would begin focusing on similar work.[7] Soros also contributed $5 million to the Priorities USA super PAC during the 2018 election cycle.[8]

Elias became chair of the political law group at the Perkins Coie law firm in November 2009, following the appointment of Robert Bauer as White House Counsel for President Barack Obama.[10] Bauer had created the Perkins Coie political law practice in 1980, and the firm claims it is the “dominant practice in the field” and largest in the nation.[11]

Perkins Coie is a Seattle-based law firm of more than 1,000 lawyers, roughly 40 of which work for its political law practice that serves Democratic and left-of-center political candidates and non-profit clients. The political law group has also represented a large collection of Democratic presidential candidates, governors, and members of Congress; FEC records show $26,062,007 total disbursements for legal fees and related expenses during the 2016 election cycle (January 1, 2015 – December 31, 2016) to Perkins Coie from all political sources.[12]

Following the November 2018 mid-term election, Elias and the Perkins-Coie political law group will have as clients all but three of the Democratic U.S. Senators, and 100 Democratic members of the U.S. House of Representatives.[13]

The Democratic National Committee reportedly keeps a plane reserved and waiting near Washington, D.C. on election nights to fly Elias wherever a candidate in a close race with a potential recount looming may require his representation.[14]

Incumbent U.S. Senator and future U.S. Senate Majority Leader Harry Reid (D) finished just a few hundred votes ahead of challenger John Ensign out of nearly 450,000 cast, triggering a recount and the representation of Elias on behalf of Reid.[15] Reid held on to win by an official count of 401 votes.[16]

Elias represented candidate Al Franken (D) in a recount of the 2008 U.S. Senate election in Minnesota. Initial counts shortly after polling had closed showed Franken trailing incumbent Republican U.S. Senator Norm Coleman by 215 votes out of 2.9 million cast, triggering a mandatory recount. The recount resulted in Franken winning by just 312 votes. The Perkins Coie firm charged $3.6 million for its work on the recount, prompting Franken to assert he’d paid for the “Franken Wing of the Perkins Coie law office.”[17]

During the 2013 Virginia Attorney General race, Republican state legislator Mark Obenshain held a 1000 vote lead (out of 2.2 million cast) over Democrat Mark Herring on election night. Elias represented Herring in a recount that eventually put Herring ahead by 164 votes, giving him the win.[18]

Election night results showed Republican candidates with narrow leads in the races for governor (Ron DeSantis) and U.S. Senate (Rick Scott), but within the margin of error requiring recounts. Elias was retained to represent both of the Democrats, prompting Republican U.S. President Donald Trump to state on Twitter that Democrats were sending their “best election stealing lawyer” to oversee the recount.[19] Both Republicans were eventually certified as winners when the recounts did not produce enough votes for the Democratic candidates to reverse the initial election night outcomes.

Working on behalf of the Hillary Clinton 2016 presidential campaign and the Democratic National Committee in April 2016, Elias hired investigative firm Fusion GPS to conduct opposition research on Republican presidential candidate Donald Trump. The firm hired Christopher Steele, a former British spy with extensive experience in Russia. Steele produced a series of memos, collectively and popularly referred to as a “dossier,” alleging numerous conspiracies involving collusion between persons associated with the Russian government’s campaign to interfere in the 2016 election and the Trump campaign, claiming malfeasance by Donald Trump himself, and alleging the existence of blackmail information Russian intelligence might have over Trump.[20]

The Clinton campaign declined to use the dossier during the election. The most sensational allegations, particularly those implicating President Trump personally, had not been verified as of late 2017 and – according to a Washington Post analysis – “may never be [verifiable].”[21]

Several participants from the Democratic side and Steele have asserted the Clinton team was not aware of the work Steele and Fusion GPS were doing for them, and that Steele did not know who was paying for the research. The only exception appeared to be Elias, who was made aware of the progress of the work he was paying for on behalf of his clients. Perkins Coie, on behalf of the DNC and Clinton campaign, ended the project around the time of the election.[22]

In interviews with Congressional investigators shortly after the dossier became public, but before its funding source was publicly demonstrated, both Clinton campaign chair John Podesta and former Democratic National Committee chair Debbie Wasserman Schultz denied any connection between the dossier and the DNC or the Clinton campaign. Sources told CNN that Elias was seated with Podesta during the interview listening to Podesta’s testimony in his role as Clinton campaign counsel and not as a witness himself.[23]

The left-leaning Campaign Legal Center filed a Federal Election Commission complaint against the Clinton campaign and the DNC in October of 2017, accusing both of failing to file accurate campaign finance reports because—according to the complaint—the payments were concealed as legal representation from Perkins Coie, rather than as opposition research from Fusion GPS.[24] Former FEC chairman Brad Smith (R), commenting about the complaint in May 2018 to the left-of-center Center for Public Integrity, said he would be “a bit nervous” if he were in Perkins Coie’s position.[25]

Billionaire left-wing donor George Soros gave $5 million to Perkins Coie sometime before 2016 so Elias could challenge what left-wing activists allege to be restrictions that deter Democrats and left-wing constituencies from voting. Some of the laws the Soros funding has been used to challenge include photo identification requirements at polling places, limitations on early voting, and the handling of—and access to—absentee ballots. Cases were opened in Arizona, Ohio, Texas, North Carolina, Wisconsin, Michigan, Kansas and North Dakota.[26]

In January 2017, Elias joined the board of Priorities USA, a left-wing super PAC that had been used during the 2016 U.S. Presidential campaign to support Hillary Clinton. Along with the arrival of Elias on the board it was announced the organization and its non-profit arm – Priorities USA Action – would become the platform to continue Elias’ fight against election laws viewed by the organization as biased against Democratic constituencies. Priorities also stipulated that it would be absorbing another organization named Every Citizen Counts, which had spent $17 million during 2016 on election law challenges led by Elias in North Carolina, Ohio, Virginia and Wisconsin – a mission identical to and possibly coordinated with the financing Soros provided to Perkins Coie.[27]

Between March and June 2018, Soros contributed $5 million to the Priorities USA super PAC.[28]

Elias has been a major contributor to expanding the ability of donors to give money to federal political causes, leading to charges of hypocrisy against him specifically, and his clients generally, from left-of-center critics.

“Though Democratic candidates often call for campaign finance reform on the campaign trail, they pay Elias and his law firm to deregulate money in politics behind the scenes, through Federal Election Commission proceedings, litigation, legislation drafting and aggressive campaign lawyering,” said a representative of Common Cause, a left wing advocacy organization, in late 2018.[30]

Following the U.S. Supreme Court’s Citizens United decision striking down federal campaign finance restrictions, Elias successfully appealed to the Federal Election Commission (FEC) for an administrative ruling that allowed for the creation of so-called “super PACs” – political committees that can accepted unlimited contributions. He has since helped Democratic organizations and candidates establish and manage these committees.[31]

In 2014, Elias helped Republican Speaker of the House John Boehner increase the maximum allowable annual contribution from an individual to a political party committee from $97,400 to at least $777,600 (and possibly more). The change was inserted as a rider on a massive $1.1 trillion federal spending bill that was approved during the lame-duck session of Congress following the 2014 mid-term election.[32]

A lobbyist for Public Citizen, a liberal political advocacy organization founded by Green Party candidate and left-wing activist Ralph Nader, has complained that Elias has been “very effective in doing a great deal of damage to our campaign finance laws” and “instrumental in tearing down the laws that are trying to level the playing field.”[33]

Political advertising regarding federal elections and candidates that is purchased for appearance on radio, television and print generally must adhere to Federal Election Commission rules requiring clear disclosure of the committee or donor paying for the advertisements. During 2011, Google and Facebook hired Elias to help them obtain an exemption from this requirement for political advertising on their platforms. Elias argued the restrictions were not practical for his clients, with FEC commissioners ultimately voting 4-2 in favor of the exemption for Google and deadlocking 3-3 on the request regarding Facebook.[34]

Facebook continued to operate as if exempt from disclosure rules. During the 2016 U.S. general election, $100,000 worth of Russian-backed and undisclosed advertisements intended to influence voters were purchased on Facebook with another $4,700 spent by Russian sources on Google political advertisements. In October 2017, following the controversy that ensued regarding Russian interference in the 2016 elections, both Republican and Democratic Senators advocated for legislation to require Facebook and Google to adhere to the same disclosure rules as other media.[35]

Some Democratic political figures Elias has represented include: