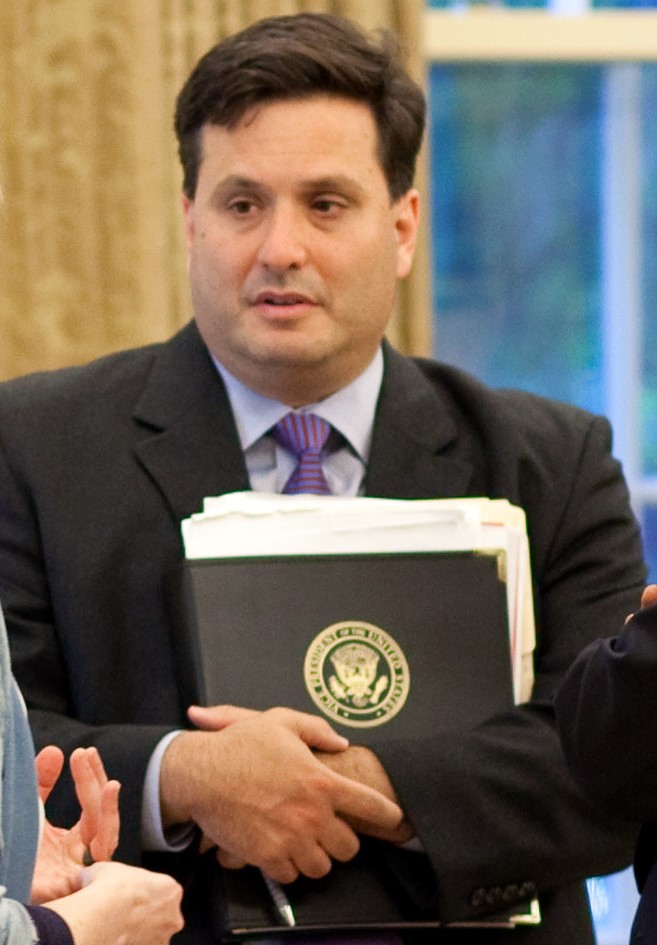 Ronald A. “Ron” Klain is a lawyer, former lobbyist, [1] and Democratic Party operative who has been the White House Chief of Staff during the Biden administration since January 2021. Klain has worked on-and-off for Joe Biden for 35 years. [2] [3]

As White House Chief of Staff, Klain is notable for his active presence on Twitter. Among other posts he has made in the role are retweets of statements calling the administration’s Occupational Safety and Health Administration (OSHA)  COVID-19 vaccine mandates “the ultimate work-around” for the government to require vaccinations [4] and COVID-19-related supply chain problems a “high class problem.” [5]

Prior to joining the Biden administration, Klain worked on Hillary Clinton’s unsuccessful 2016 presidential campaign, [6] was the Obama administration’s Ebola response director, chief of staff to then-Vice President Joe Biden, [7] [8]  associate counsel to then-President Bill Clinton, [9] [10] and chief of staff to then-Vice President Al Gore. [11] [12] [13] He was also the lead counsel for the Gore Recount Committee’s efforts to conduct a recount of the State of Florida’s 2000 presidential-election results. [14]

Ronald Klain is a lawyer and career Democratic Party operative who has been the White House Chief of Staff during the Biden administration since January 2021 and has worked on-and-off for Joe Biden for 35 years. [15] [16] In November 2020, President-elect Biden selected Klain to be White House Chief of Staff, due in large part to his long experience working with Klain. Biden claimed that they had “rescued the American economy from one of the worst downturns in our history in 2009 and later overcame a daunting public health emergency in 2014.” [17] His appointment came despite Klain’s 2020 remarks as a part of a Texas A&M University panel in which he said the Obama administration “did every possible thing wrong” during the 2009 swine flu outbreak. [18]

As Chief of Staff, Klain retweeted that the Biden Administration Department of Labor Occupational  Safety and Health Administration (OSHA) COVID-19 vaccine mandates were the “ultimate work-around” for the federal government to require vaccinations in September 2021. [19] Klain’s Twitter post was referenced in U.S. Supreme Court questioning that led to a ruling ultimately staying enforcement of OSHA COVID-19 vaccination mandates for businesses with more than 100 employees. [20] [21]

In 2022, Klain blamed the Trump administration for the Biden administration’s low public approval on COVID-19 pandemic measures. [22] Klain also argued that the Trump administration “created an expectation of a president creating a [s***storm] every single day” [23] and said the American people would have to “fight for their democracy” after Rep. Liz Cheney (R-WY) lost renomination in a Republican primary election. [24]

During the COVID-19 pandemic, Klain retweeted a statement calling COVID-19-related supply-chain problems a “high class problem.” [25] During the Trump administration, he had said it would be “impossible to cut off the flow of people from China to the United States” just the week following the Trump administration banning travel from China in 2020. [26] He also urged people to patronize businesses in Chinatowns during the initial COVID-19 outbreak in the U.S., saying, “Lets fight the disease AND let’s fight prejudice.” [27]

Klain was also an early supporter of President Biden’s controversial selection of president of the liberal Center for American Progress (CAP) (CAP) Neera Tanden to run the Office of Management and Budget (OMB). [28]

In September 2018, Klain appeared to endorse unproven allegations of sexual harassment against then-Supreme Court nominee Brett Kavanaugh. He tweeted that he had “felt the exact same way” after hearing similar allegations against Supreme Court Justice Clarence Thomas, whose nomination he observed as chief counsel to the Senate Judiciary Committee in 1991. [29]

During the Obama administration, Ron Klain served as chief of staff to then-Vice President Joe Biden from January 2009 until January 2011. He also worked as the administration’s Ebola response coordinator from October 2014 until February 2015 despite a lack of medical experience. [34] [35]

In 2010, Klain supported the Obama administration’s decision to loan $465 million of government funds to the now-bankrupt solar-panel manufacturer Solyndra and convinced President Barack Obama to visit Solyndra’s facilities despite the “risk factors” that existed with the company. [36] [37] He also downplayed the risks of President Obama visiting companies that might fail despite government support. [38] Prior to joining the Obama administration, Klain was involved in the Obama transition team and worked as a lobbyist for Fannie Mae until 2005. [39]

Ron Klain worked in various roles in the Clinton administration from 1993 until 1999. [40] Klain was associate counsel to President Bill Clinton and counselor to Attorney General Janet Reno, where he assisted in the appointment of federal judges. [41] [42] Klain also worked as then-Vice President Al Gore’s chief of staff. [43] [44] [45]

In 2000, Klain was Chief General Counsel for the Gore Recount Committee’s efforts to conduct a recount of the State of Florida’s 2000 presidential election results. [46] [47]

Prior to joining the Biden administration, Ron Klain worked as a lecturer in law at Harvard Law School and an adjunct professor at Georgetown University. [54]

He also worked as chair of the advisory board of the left-progressive political-technology firm accelerator Higher Ground Labs from 2017 until 2020 [56] and as an external advisor to the Skoll Global Threats Fund, an offshoot of the left-of-center Skoll Foundation. [57]

Klain graduated with an A.B in American government and politics from Georgetown University in 1983. He received a J.D. from Harvard Law School in 1987. [59] Klain was born in Indianapolis, Indiana, and resides in Chevy Chase, Maryland. [60] [61]

In April 2021, President Joe Biden nominated Klain’s wife, Monica Medina, to be the assistant secretary of state in U.S. Department of State’s Bureau of Oceans and International Environmental and Scientific Affairs. [62] She worked in various capacities for the National Oceanic and Atmospheric Administration (NOAA) during the Obama administration and Clinton administration. [63] [64] [65]