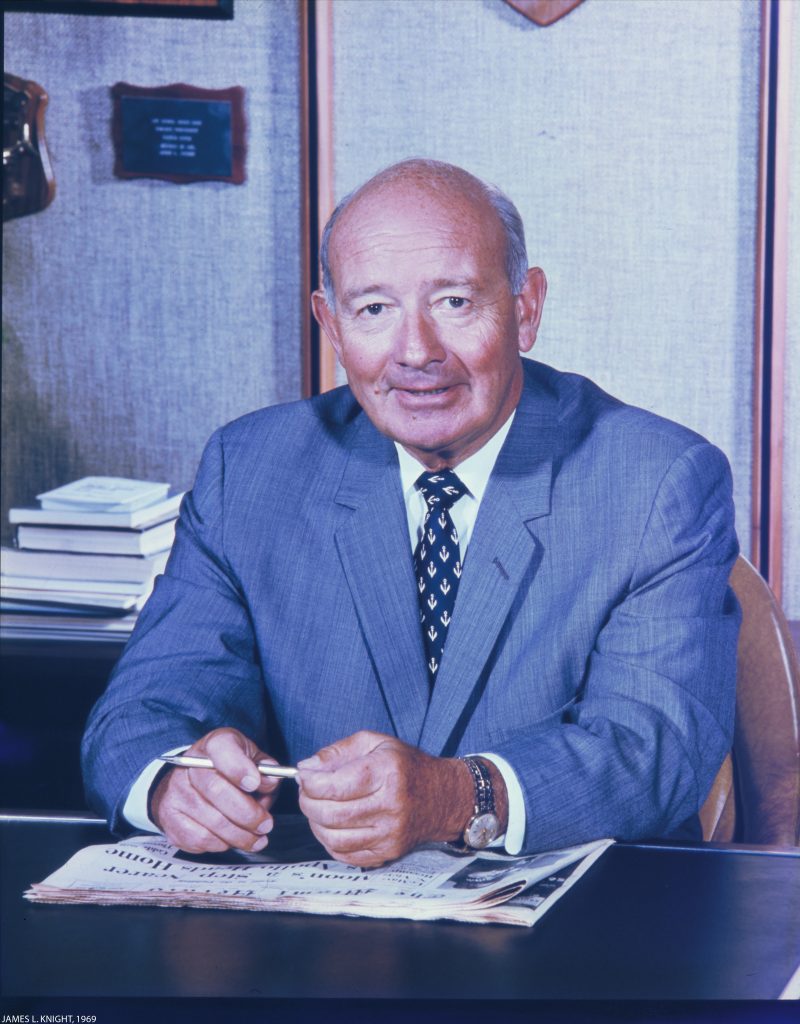 The Knight Foundation is a left-leaning private foundation that sets a primary emphasis on funding media-related projects. The foundation, which was seeded by the estate of economically conservative newspaper publisher John S. “Jack” Knight, began by endowing chairs in journalism at universities. In the past decade, the foundation has funded non-profit news sites, backed paying the salaries of individual reporters at newspapers, and supported many research projects about how newspapers can remain viable enterprises. In addition, the Knight Foundation gives grants to newspapers such as the Salt Lake City Tribune that have become nonprofits.

More recently, as an extension of its media grantmaking, the Knight Foundation supports organizations critical of the dominance of large technology companies such as Facebook, Amazon, Apple, and Google.

John S. “Jack” Knight (1894-1981) began his career at the Akron Beacon-Journal, which his father owned and edited. In 1933 he inherited the newspaper when his father, Charles Landon Knight, died.  Knight gradually began buying other newspapers, including the Philadelphia Inquirer, Detroit Free Press, and Miami Herald.

Politically, Knight was a Republican but not, for much of his life, a conservative.  His newspapers often endorsed Democrats and, in the 1940s, he favored Wendell Willkie and Thomas E. Dewey for the Republican presidential nomination over more conservative rivals. But an anonymous “Eastern newspaper publisher who is a devout supporter of the New Deal” told the Saturday Evening Post in 1945, “If Jack Knight is a liberal, I am a ballet dancer.” [1]

Shortly after the Allied victory in World War II in 1945, Knight wrote an editorial affirming that free enterprise ensured defeat of the Axis. “Beware creeping socialism,” Knight warned.  “The spirit of individual risk must not die… Security is for the old and should be shunned by the young.” [2]

When the Taft-Hartley Act passed in 1947, both Jack Knight and his brother, James Knight, used the powers given to them under the new law to successfully fight the International Typographical Union, which wanted to maintain the “closed shop” policy which mandated that all new openings had to be filled with union members. In Chicago, Knight’s Chicago Daily News led the effort against the ITU, which extended its strike to the Miami Herald. Among the union’s efforts was placing billboards at airports that read, “STAY AWAY FROM MIAMI, FLORIDA—SCAB CITY OF THE USA.” [3]

Knight’s biographer, Charles Whited, writes that on October 1, 1949, an engraver found a trash bin on fire at the Miami Herald’s newsprint warehouse, which subsequently caught on fire. As the fire blazed, “James Knight and press chief Chick Hopkins struggled to salvage heavy paper rolls, manhandling them on rolling dollies in six inches of water while a group of union pressmen idly watched.  ‘You want me to help me get this stuff out and save your jobs?’ Knight shouted.  The pressmen ignored him.” [4]

The warehouse fire was put out after 30 hours, with scores of firefighters injured and two thousand tons of newsprint destroyed.  Repeated injunctions against union harassment enabled non-union composing room workers to work; by 1952, the ITU withdrew its pickers. [5]

In 1940, the Charles Landon Knight Memorial Education Fund was created to provide grants and loans to students. This organization evolved into the Knight Foundation in 1950. The foundation stayed small during John S. Knight’s lifetime.

In 1974, Knight’s close friend, Lee Hills, advised him that estate taxes could consume as much as $70 million of his $200 million estate. Knight Newspapers at the time was contemplating a merger with Ridder Newspapers, and Hills argued that as much of half of Knight’s shares in Knight Newspapers would have to be sold to pay the taxes, and such a sale could prevent the Ridder merger. [6]

Knight revised his will leaving most of his estate to the Knight Foundation, Knight Newspapers and Ridder Newspapers completed their merger by 1974. [7] But in October 1977, Knight told the Akron Press Club, “A publisher can’t leave enough negotiable securities to meet the death tax. His family must sell to big chains in order to pay off the government. It’s disgraceful that other members of an owner’s family can’t have what was built up by their parents and grandparents.” [8]

Knight left no restrictions on what the Knight Foundation could spend its money on.  He wrote in his deed of trust that his intent was to create “a truly effective foundation” whose board “should have freedom to exercise its best judgment as required by the terms and conditions under which they live.” [9]

John S. Knight died in 1981, and when his estate cleared probate in 1986, the Knight Foundation received $428 million. An additional $200 million was added to the endowment after James L. Knight’s death in 1991.

The foundation’s first major impact came in 1988 with the creation of the Knight Commission on Intercollegiate Athletics. [10] Historian Steven L. Schindler credits Creed Black, who became Knight Foundation president in 1988, with the creation of the commission. Black was formerly the publisher of the Lexington, Kentucky Herald-Leader, which won a Pulitzer Prize for exposing a basketball scandal at the University of Kentucky in 1987. The commission, initially headed by William L. Friday and Theodore Hesburgh, convinced colleges to adopt reforms including higher graduation rates for basketball and football players and tighter controls by university presidents over sports programs. The commission was disbanded in 1992 and 1996 but revived twice and remains a significant factor in discussions about college sports administration. [11]

The foundation also endowed 25 chairs of journalism at universities, including the ones held by Diane Winston and Michael Pollan, though John S. Knight had once declared, “I do not believe in schools of journalism.” [12]

Alberto Ibarguen, formerly publisher of the Miami Herald, became the Knight Foundation’s president in 2005, a position he still holds. Adrienne LaFrance, reporting in Fast Company in 2013, said that under Ibarguen’s tenure, the Knight Foundation moved away from funding universities to “huge grants to startups, small teams, and entrepreneurs” with the goal of shifting the foundation’s interests “away from the confines of a newsroom and into the realm of big data and open government.” [13]

In 2013, the Knight Foundation paid author Jonah Lehrer $20,000 to give a speech about the future of journalism, after Lehrer was found to have recycled some of his earlier articles in New Yorker posts and to have faked quotes from Bob Dylan.  The foundation subsequently said it should not have paid Lehrer, who it said “violated the fundamental tenets of journalism.” [14]

In November 2022, it was announced that the John S. and James L. Knight Foundation would donate a $3.8 million grant to the South Carolina-based Clemson University’s Media Forensics Hub, which is used to both study and educate on disinformation and online inauthenticity. [15] The Foundation’s grant, along with a similar $3.8 million grant from the University, would be distributed to the Hub over the next four years and the funding would be used to hire more faculty, improve infrastructure for the Hub, and help fund both research assistants and postdoctoral researchers. [16] According to John S. and James L. Knight Foundation President Alberto Ibarguen, “We are thrilled to add the Media Forensics Hub at Clemson University to our growing community of research centers across the U.S. It’s an investment that will support the Hub’s research on online disinformation and its work to promote better societal resilience to information threats.” [17]

In 2016 the Knight Foundation collaborating with Pierre Omidyar’s Democracy Fund, the Gates Foundation, and the MacArthur Foundation launched NewsMatch, which promised to match donations made by individuals to organizations affiliated with the Institute for Nonprofit News. In 2018 NewsMatch provided $7.6 million in matching grants to 154 news organizations, for a total since 2016 of $15.8 million. [19]

In February 2019, the Knight Foundation announced it was launching a five-year, $300 million grantmaking program to support local newsgathering. [20] Besides funding NewsMatch, the foundation said it would make grants that included:

In July 2019, the Knight Foundation announced it would give $50 million to support what it called organizations that would analyze “technology’s role in our democracy.”  The foundation allotted $39 million to creating eleven centers at universities affiliated with schools of journalism or communications that would study “the rules that should govern social media and technology companies.” The foundation noted that other foundations had also made grants to these newly created centers, including the Charles Koch Foundation, the Hewlett Foundation, Craig Newmark Philanthropies, and the Omidyar Network. [25]

In August 2019, the Knight Foundation announced that $6 million of the $50 million would go to three think tanks. The Center for Technology and Society received $3 million for research on “how online platforms moderate content.” The Open Markets Institute was awarded $2 million to examine the “negative effects” of “corporate concentration of internet companies.” The R Street Institute’s $1 million grant would be used to study “a multi-stakeholder approach to the management of online content.” [26]

In November 2019, the Knight Foundation awarded $3.5 million to 21 organizations for short-term projects designed to aid members of Congress, the Federal Trade Commission, and the Department of Justice in their efforts to revise the laws and regulations overseeing technology. Among the organizations receiving grants of between $100,000 and $400,000 were the center-right American Enterprise Institute, the centrist German Marshall Fund, the left-of-center Public Knowledge, and 16 universities, mostly for projects affiliated with law schools. [27]

One of the organizations receiving a grant under this program was the Economic Security Project, which received $250,000. The organization’s founder, Facebook co-founder and former owner of The New Republic Chris Hughes, told the Washington Post that “corporate power has gotten out of control” and that the Economic Security Project would “push back against” large corporations.  He said that the group would give grants “to a cross section of groups—to include groups fighting tech but also in the agriculture and pharmaceutical spaces.”  Hughes did not name any groups that would receive grants, but Washington Post reporter Tony Romm said the organizations would be “akin to those that fought against Amazon” in their failed attempt to expand to New York City. [28]