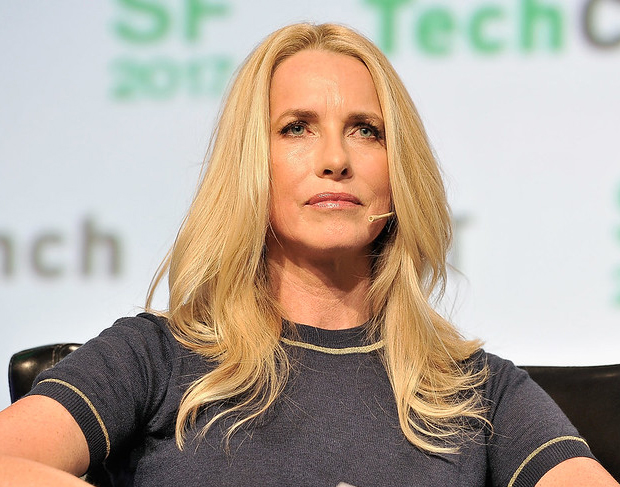 Laurene Powell Jobs is a business executive and philanthropist, best known as the president of the left-leaning grantmaking enterprise Emerson Collective. Born Laurene Powell, she is the widow and heir of Apple Computer executive Steve Jobs, with a current estimated fortune of $21-24.4 billion, making her the fifth-richest woman in the world. [1]

Despite the Emerson Collective being one of the largest nonprofits in America, with over $1.8 billion in assets,[2] Powell Jobs has traditionally maintained a low profile. She has written op-eds for The Atlantic [3] and the New York Times,[4] but she has given few interviews. [5] Emerson Collective even utilizes an unusual LLC nonprofit structure to reduce public reporting requirements,[6] thereby allowing far greater operational opacity than similar nonprofits. [7]

Powell Jobs has significantly increased her public influence since 2018 with a series of high-profile events, including co-founding the Climate Leadership Council, purchasing a majority stake in The Atlantic, and buying a large share of Monumental Sports and Entertainment. [8]

Laurene Powell was born in West Milford, New Jersey in 1963. She attended the University of Pennsylvania for a degree in economics and a degree in political science. After graduation, she worked at Goldman Sachs and Merrill Lynch. Later, Powell attended Stanford University for her MBA.

Steve Jobs died in 2011, leaving Powell Jobs as his primary heir. Her inheritance totaled to $14.1 billion, consisting of 5.5 million Apple shares and a 7.3% controlling stake in Disney. [10] She has used this fortune to acquire stakes in numerous business ventures and to fund non-profits.

Using funds inherited from her late husband, in 2017, Powell Jobs purchased a 20% stake in the Washington D.C.-based Monumental Sports and Entertainment, the company which controls the Washington Wizards NBA franchise and Washington Capitals NHL franchise. [12]

Powell Jobs has also made numerous business investments through her nonprofit LLC, the Emerson Collective. Since 2014, the Collective has funded more than 30 start-up companies, mostly in Silicon Valley, most prominently social media company Pinterest. [13] The nonprofit also purchased a controlling stake in the left-leaning Atlantic magazine, as well as minority stakes in the left-of-center media outlets Mother Jones, the Marshall Project, and ProPublica. [14]

Powell Jobs engages in philanthropy and activism based on broadly progressive views. Her ventures tend to be run like Silicon Valley start-ups, leading to work for a wide range of causes, and through highly variable means. [15]

The Emerson Collective is Powell Jobs’s primary philanthropic and activist operation. The Collective was initially founded in 2004, but grew dramatically after Steve Jobs’s death in 2011,[18] and currently has over 180 staff members. [19]

In 2021, Powell Jobs announced she would be investing $3.5 billion in the Emerson Collective Foundation, also called the Waverley Street Foundation, to provide support for climate change activism. The funds were also slated to be expended over the next ten years to show the “urgency of the issue.” [24]