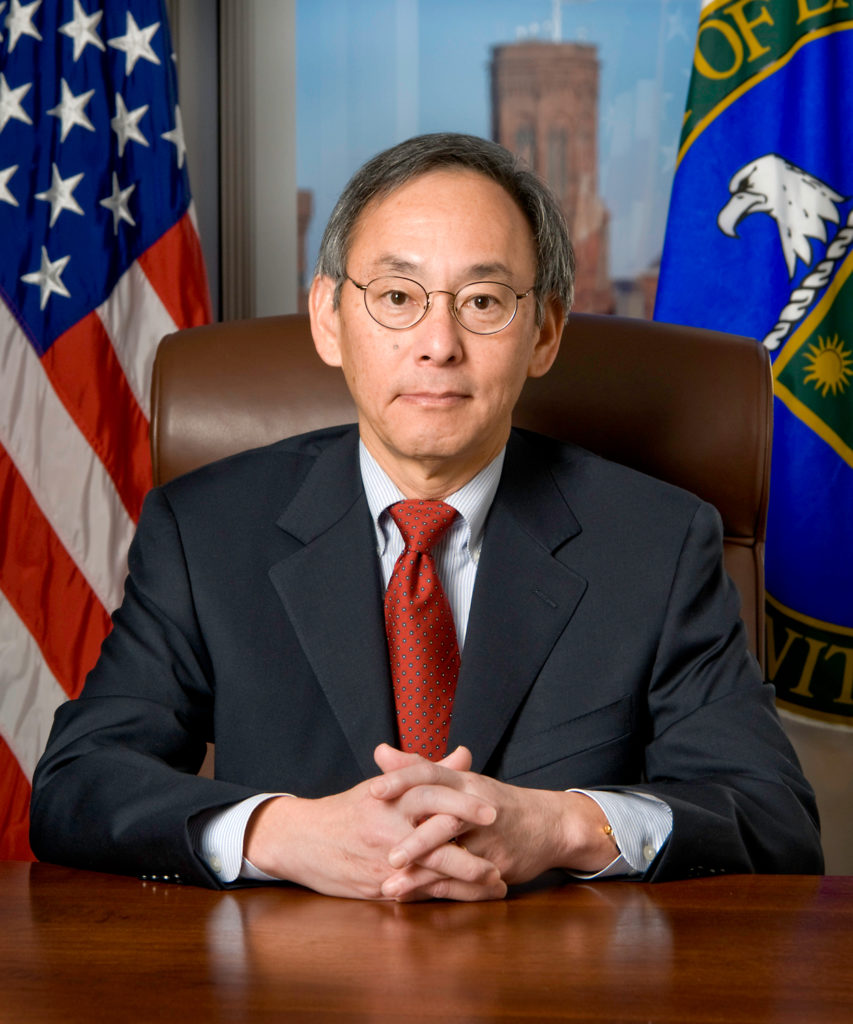 Steven Chu is a Nobel Prize-winning physicist who served as U.S. Secretary of Energy in the Barack Obama administration. Chu is a leading advocate for aggressive left-leaning environmentalist legislation to combat climate change.

Chu is famous for some of his unconventional ideas for combating climate change; most notable, he urged the entire country to paint all roofs white to reflect heat. Chu also is a major supporter of a carbon tax.

Steven Chu was born in 1948 in St. Louis, Missouri. His parents had fled China during the Chinese Civil War, which saw the communists win and take power on the mainland. His father was an assistant professor at Washington University St. Louis. Chu was the middle child of three boys. [1]

The family soon moved to Queens, New York, where his father took a job as a professor at Brooklyn Polytechnic University. When Chu was three, his family moved again to Garden City on Long Island. [2]

Chu grew up knowing only English because his parents only spoke to him in that language. However, when he was in the fourth grade his parents tried to send him to a special Saturday Chinese school in order to learn about Chinese culture. Chu rebelled against this because all of his friends were not Chinese and he had little knowledge of the Chinese culture. Chu also has said that he was not discriminated against growing up. [3]

In 1970, Chu received his bachelor’s degrees in mathematics and physics from the University of Rochester. Chu then went to the University of California, Berkeley where he would receive his doctorate in physics in 1976. During his time at Berkeley, Chu said he opposed the Vietnam War but he did not take part in any protests. Chu would remain at Berkeley until 1978 as a postdoctoral fellow. [4]

In 1978, Chu joined Bell Laboratories in Holmdel, New Jersey. While at Bell Labs, Chu worked on using laser lights to cool down atoms. Normally, atoms move as fast as 4,000 kilometers per hour, making it impossible for scientists to study them before they disappear. But Chu and his colleagues developed a technique to use laser lights to cool those atoms down to near absolute zero, dramatically slowing atomic movement and allowing scientists to study them individually. [5]

In 1987, Chu left Bell Labs and became a professor of physics and applied physics at the University of Stanford. While at Stanford, Chu continued his exploration of physics and began the study of polymer physics and biology. [7]

In 1997, Chu won the Nobel Prize for Physics for his work on cooling atoms at Bell Labs. He shared the award with two of his colleagues. [8]

In December 2008, Chu was nominated by President-elect Barack Obama to serve as his Secretary of Energy. President-elect Obama hailed Chu’s work on environmentalist energy research, saying he had “blazed new trails as a scientist and teacher and administrator, and has recently led the Berkeley national laboratory in pursuing new alternative and renewable energies. Steven is uniquely suited to be our new Secretary of Energy as we make this pursuit a guiding purpose of the Department of Energy as well as a national mission.” [10]

Chu’s appointment was seen as a sign that the incoming Obama administration would proritize the development of environmentalist-aligned energy sources. But Chu made some decisions that disappointed environmentalists. Chu, who had previously supported a ban on new coal-fired power plants, reversed himself and did not prohibit the construction of new coal-fired power plants. Chu also called for a reduction into research into hydrogen-powered cars. Chu came out against the Yucca Mountain storage facility in Nevada and instead backed the construction of fast neutron reactors which would burn the waste. Such a development would expand the nuclear industry. [12]

In May 2009, Chu recommended that every American paint their roofs white. He also recommending painting all pavement white. He claimed that doing that would conserve energy and reflect sunlight back into space. He said that it would be equivalent to taking cars off the road for 11 years. [13]

“Now you smile, but if you look at all the buildings and make all the roofs white, and if you make the pavement a more concrete-type of colour than a black-type of colour, and you do this uniformly… It’s the equivalent of reducing the carbon emissions due to all the cars in the world by 11 years,” Chu said. [14]

In 2013, Chu left the U.S. Department of Energy and returned to the private sector.

“I used to be agnostic on whether we should take the emissions cap-and-trade approach or the carbon tax route, but now I’m more in favour of a carbon tax. The reason is Europe started and operates a cap-and-trade system but the emissions price collapsed before long, in large part because there were too many credits given out. Policy makers need great courage to reduce the number of allowances, year by year, because there’s so much pressure from various interested parties. For carbon-pricing mechanisms to have a significant impact on emissions, governments need some way of arriving at a meaningful cost on carbon. By meaningful, I mean about $60-70/tonne of CO2 within the next couple of decades. You can’t suddenly do that, but over two decades getting to $70/tonne will give industry plenty of time to prepare. A carbon tax that rises in a predictable way would give certainty, and businesses always say they want certainty.” Chu said in an interview. [16]