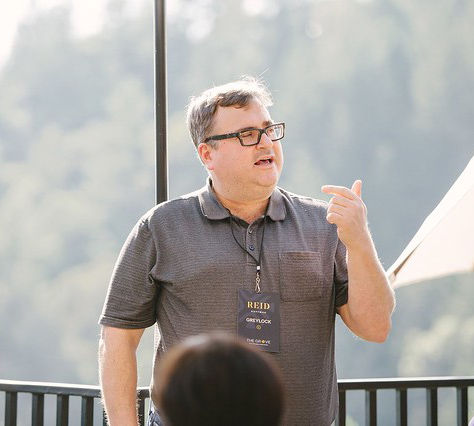 Reid Hoffman is an American entrepreneur, philanthropist, and left-of-center political activist best known for founding LinkedIn. Hoffman was relatively apolitical prior until 2016, when he became an outspoken critic of then-Republican candidate Donald Trump during the 2016 presidential election. Following the election, Hoffman called President Trump “worse than useless as a president.” [1]

In 2017, Hoffman launched a number of left-of-center organizations, investments, and fundraising efforts to oppose President Trump and the Republican Party. Hoffman emerged as “one of the most influential Democratic donors of the Trump era.” [2] Democratic insiders split in their opinion of his activism. Some praised his personal zeal and commitments, while others considered his efforts reckless and emblematic of Silicon Valley attempting to take over politics. [3]

Reid Hoffman was born in 1967 in Stanford, California. His first job was as a role-playing game designer, and he earned his first creator’s credit at 12 years old. [4] He attended the Putney School and then Stanford University where he earned a bachelor’s degree in symbolic systems. Hoffman then got a master’s degree in philosophy at Oxford University. He was initially attracted to academia but decided that he could make a greater impact on the world through entrepreneurship. [5][6]

After graduating from Oxford University in 1994, Hoffman returned to California where he intended to start a company. He approached a number of venture capitalists but found little traction due to his lack of work experience. [7]

Hoffman began work as a senior user experience architect at Apple. In 1996, he became the director of project management and development at Fujitsu Software Company where he worked on early digital world building. [8]

In 1997, Hoffman co-founded SocialNet and became its vice president and board member. The company was an early attempt at creating a digital social network and online dating site. In 2001, the company was acquired by Spark Networks and was later used as the basis of ChristianMingle.com. [9]

In 1998, Hoffman became a board member at a Stanford-based startup which would become PayPal. In 2000, Hoffman left SocialNet to work as executive vice-president of PayPal where he oversaw outreach to connect PayPal with government agencies, banks, and retail websites. He worked at PayPal until 2002, when eBay purchased the payment processor for $1.5 billion. [10]

The following year, Hoffman founded LinkedIn and became its first CEO. The company grew quickly, reaching half a million users within its first year and becoming profitable in three years. In 2009, Hoffman stepped down as CEO of LinkedIn to become a partner at Greylock, a venture capital firm. [11] In 2011, LinkedIn went public. [12]

Hoffman sat on the board of a number of organizations, primarily in tech, including Grassroots, Vendio, If(we), Six Apart, Zynga, Shopkick, Edmodo, Gixo, Wrapp, Airbnb, Xapo, Blockstream, Enrepreneur First, Neeva, Coda, NAUTO, Convoy Inc, Aurora, and Microsoft. He was also a member of the provost council at the University of California Santa Clara. [13]

Since 2011, Hoffman has been a member of the Bilderberg Meeting, an annual conference of around 150 business executives, politicians, and philanthropists who advocate for neoliberal policy goals. [14]

In 2015, Hoffman was elected to the Council on Foreign Relations, a highly influential nonpartisan think tank focused on foreign policy. [16]

In 2016, Hoffman created Trumped Up Cards, an imitation of the popular card game Cards Against Humanity, which mocked Donald Trump. [17]

Investing in US invested $15 million in MotiveAI, a technology startup which launched Versa, a social media-based news agency. In 2017, Versa was accused of spreading fake news in the Alabama special election to undermine Republican U.S. Senate candidate Roy Moore (R-AL). [21]

Investing in US has invested at least $20 million in Alloy, a data exchange program, to improve the Democratic Party’s information-sharing networks. Many Democratic operatives have criticized Alloy for simply duplicating the party’s existing networks and expressed concerns about turning party information over to a private corporation. [22] [23]

Investing in US heavily invested in ACRONYM, the left-of-center advocacy group behind Shadow, the voting program which failed during the 2020 Democratic primaries in Iowa. [24]

In June 2021, the Washington Free Beacon criticized the liberal issue-advocacy group Indivisible, which was launching a “Truth Brigade” project to “monitor” supposed right-wing “disinformation,” for having taken money in the past from Hoffman’s Investing in US. The Free Beacon noted that in 2017, Hoffman financed a group that created fake social media accounts specifically designed to suppress conservative voter turnout in Alabama’s 2017 Senate special election. Indivisible denied that Hoffman had any connection to the “Truth Brigade” project.[27]

Reid Hoffman is a major personal donor to the Democratic Party. As of March 2021, Reid Hoffman has made over 800 donations to political candidates and PACs, with nearly all of those contributions going to Democratic individuals and organizations. [28] Prior to 2017, Hoffman made $2 million in donations, but he dramatically increased his political spending after the election of President Trump. In the 2020 election cycle, Hoffman pledged to donate $100 million to oppose President Trump and the Republican Party. [29]

In the 2020 presidential election, Hoffman was an early supporter of U.S. Senator Cory Booker (D-NJ), with whom Hoffman was friends when they both attended Stanford University. In 2009, Hoffman introduced Sen. Booker to numerous Silicon Valley executives later supported his political ambitions. [30] Hoffman donated $18,700 to Sen. Booker’s U.S. Senate campaigns, and $2,800 to Sen. Booker’s 2020 presidential campaign. [31]

In 2017, Hoffman spent $300,000 to support Democrats in Virginia through Win the Future and Win Virginia, two organizations into which Investing in US had made investments. [36]

Hoffman has given hundreds of thousands of dollars to smaller left-of-center PACs, including the One For All Committee, the Arena PAC, Republican Women For Progress PAC, Straight Talk Politics PAC, Fair Fight, Black PAC, and People’s House Project Inc. [39]

Hoffman previously pledged to support never-Trump Republicans, particularly the Lincoln Project,[40] though as of March 2021, he has not donated to the organization. [41]

After the election of President Donald Trump, Hoffman began holding informal meetings every few months dedicated to rallying mega-donors for the Democratic Party and discussing political strategy. He became known for his personal oversight of fundraising efforts, for which he reached out to politicians, billionaires, and Silicon Valley leaders. One donor compared Hoffman’s role in the Democratic Party to that of billionaire David Koch’s in the Republican Party. As of September 2020, Hoffman’s efforts have raised hundreds of millions of dollars for Democrats from other donors. [42]

Nonetheless, Hoffman is a controversial figure within Democratic fundraising circles. Hoffman approached his fundraising from the perspective that the Democratic Party was fundamentally broken and needed to be overhauled, courting criticism from many establishment Democrats who viewed Hoffman as a reckless outsider. He has made many of his largest personal investments, including $20 million to fix Democratic information sharing infrastructure and $3 million to support Democratic candidates in Virginia, through organizations independent of the Democratic Party. Other Democratic operatives have complained that Hoffman is too willing to use dirty tactics, argued that his support team often ignores advice from experienced campaigners, and claimed that he prioritizes short-term victories over long-term Democratic Party growth. [43]

Hoffman and his fundraising team have reportedly considered potentially illegal fundraising and campaign tactics, including tampering with mail-in ballots and paying activists to collect votes. [44]

In 2018, the conflict between Hoffman and Democratic insiders reportedly waned as Hoffman became more cooperative in efforts to defeat President Trump in the 2020 presidential election. Though an early supporter of Sen. Booker, Hoffman enthusiastically fundraised for President Joe Biden during his campaign, particularly among Silicon Valley donors. [45]

In 2017, then-U.S. Senator Jeff Sessions (R-AL) resigned to become U.S. Attorney General under President Trump. This triggered a special election to fill the Senate vacancy between Doug Jones (D-AL) and former Alabama Supreme Court Chief Justice Roy Moore (R). Moore came to national attention due to a series of controversies, including sexual misconduct allegations, his views on LGBT rights, his advocacy in support of implementing Christian doctrine in law, and his opposition to Islam. Moore ultimately lost to Jones. [46]

In December 2018, the left-of-center New York Times revealed that through Investing in US,[47] Reid Hoffman invested $750,000 in American Emergent Technologies (AET), one of a few Democratic organizations that ran Project Birmingham. Project Birmingham was a social media-based misinformation campaign against Moore based on the methods allegedly used by the Russian government to influence the 2016 presidential election. The experimental campaign involved creating a fake conservative Facebook pages which sowed dissent in the Republican Party by encouraging write-in candidates. The campaign also attempted to portray Moore as being supported by the Russian government by linking his campaign to Russian bots. Facebook suspended five accounts after Project Birmingham was exposed. [48][49]

Hoffman later claimed that he did not know AET was running a misinformation campaign, but he apologized for being unaware of their activities. [50]