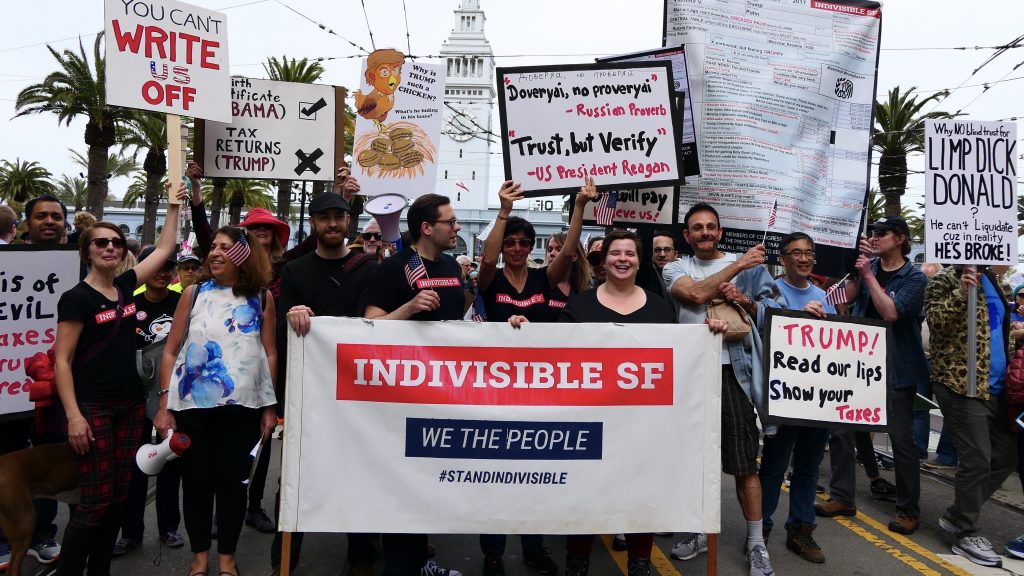 Indivisible Civics is the charitable arm of the Indivisible Project, a left-of-center lobbying organization that was created to provide liberals a practical guide about “Resisting the Trump Agenda.” [1]

Board members of Indivisible Civics have affiliations with multiple left-of-center organizations including the Civic Engagement Fund, the Center for American Progress, the Annie E. Casey Foundation, and The Hub Project. [3][4]

Indivisible Civics is the non-profit charitable arm of the Indivisible Project (or Indivisible), a left-of-center lobbying and electoral advocacy organization headquartered in Washington, D.C., and created in late 2016 as a response to the election of President Donald Trump. It was established to provide liberals a practical guide about “Resisting the Trump Agenda,”[5] and its goal for 2018 was to replace all elected officials who don’t reflect their views with “diverse, progressive, local leaders.” [6]

Indivisible Civics provides the project with movement coordination, resources, training, and funding. It has assisted with the project’s 73,625 calls to Congress since the beginning of 2019, and its “tools” have been used in 2,438 events in every state in America, including Indivisible’s “Defund Hate” campaign which encouraged Congress to decrease funding to United States Immigration and Customs Enforcement (ICE), Customs and Border Protection (CBP), and the Department of Homeland Security. [7]

Indivisible Civics receives a substantial amount of money from donations from the public and contributions from foundations. It is also listed on ActBlue Charities, a pass-through organization created to facilitate donations to left-of-center 501(c)(3) nonprofits and the charitable affiliate of the 501(c)(4) nonprofit ActBlue Civics and 527 political action committee ActBlue. [9]

Indivisible Civics granted $33,750 to the Arizona Center for Empowerment in 2019, as well as $33,750 to the New Florida Majority Education Fund, $5,000 to the National Partnership for New Americans, and $7,500 to the Congressional Hispanic Caucus Institute. [12] The only grant made in 2018 was $10,000 to the Mi Familia Vota Education Fund, a left-leaning voter registration and mobilization organization that guides immigrants through the citizenship process to increase the political power of left-leaning Latino voting blocs and conducts outreach to ensure high turnout among left-leaning Latinos. [13]

Indivisible and Indivisible Civics announced in annual reports that the two organizations received a combined amount of $6.5 million for 2017, 35 percent from small donations, 25 percent from major gifts, and 40 percent from foundation grants. These percentages changed drastically in 2019 when Indivisible reported receiving an additional $14.9 million of which only 17.3 percent came from small donations while 53 percent came in the form of grants from private foundations despite Sarah Dohl, the spokesperson for Indivisible, claiming that the project would not allow foundations to fund the majority of the organization to “maintain our independence from both the funders and from the [Democratic] party.” [14]

One of the board of directors for Indivisible Civics, Meighan Stone, is a senior fellow in the Women and Foreign Policy Program at the Council on Foreign Relations (CFR), president of the Malala Fund from 2014 to 2017, and is on the board of directors for organizations such as the Faith and Politics Institute, and the Civic Engagement Fund, a left-of-center advocacy organization, and project of the New Venture Fund, a left-of-center grant-making organization which has been accused of serving as a “dark money” fund for concealing the identities of its donors. [17][18]

Another member of the board of directors is Indivar Dutta-Gupta, who has worked for the Center for American Progress, a liberal think tank based in Washington, D.C., that was founded by John Podesta, former White House Chief of Staff for President Bill Clinton, Counselor to the President in the Obama White House, and chair of former U.S. Secretary of State Hillary Clinton’s 2016 Presidential campaign. [19][20] He is also on the advisory board for the left-of-center Liberation in a Generation, a fiscally-sponsored project of PolicyLink, a left-of-center nonprofit organization that seeks to increase entitlement spending, increase public participation in government-controlled health care and entitlement programs, and oppose election integrity laws.

Indivar Dutta-Gupta also received $8,000 for co-authoring a memo for the Annie E. Casey Foundation, a left-of-center grantmaking foundation that specializes in programs that deal with children. He also received $24,000 as a consultant for The Hub Project, a left-of-center advocacy and research organization established by former Obama administration officials in 2017 that works with other groups to promote left-of-center policy. [21]

Other members of the board of directors include the co-founder of Amplify, David Slifka; the chief of staff to the Vice Mayor of Berkeley, Jeremy Haile; energy product strategy lead for Google Srijata Chattopadhyay; and two co-founders and co-executive directors of the Indivisible Project, Leah Greenberg and Ezra Levin. [22]