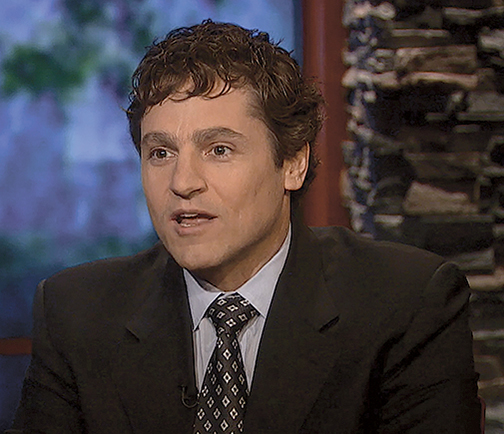 Jonathan Soros is a prominent liberal donor. The son of liberal finance billionaire and political donor George Soros, Jonathan spent many years managing his father’s varied financial interests,[1] and in recent years, has taken a prominent role in his father’s left-of-center political endeavors hoping to parlay his financial prominence into “a deeper role in the future of Democratic politics.”[2]

He has served on the board of a number of left-leaning think tanks and issues organizations such as the NAACP Legal Defense and Education Fund, New America, and the Roosevelt Institute. [3] Meanwhile, Soros and his personal foundation have given millions of dollars to left-leaning issue organizations including Planned Parenthood Votes, the Tides Foundation, Center for Reproductive Rights, Brennan Center For Justice, and Public Campaign. [4] He has also given millions of dollars to the Democratic Party, and hundreds of Democratic political candidates. [5]

In his support of left-leaning political causes, Jonathan Soros plays a significant role in the Democracy Alliance, a secretive Democratic mega-donor apparatus.[6] In 2004, Soros worked alongside his father with two 527 organizations, Americans Coming Together and Moveon.org, in support of Democratic presidential candidate Sen. John Kerry (D-Massachusetts). [7] He also has served as a leader in his father’s philanthropy, the Open Society Foundations, [8] which has delivered tens of millions of dollars to liberal political causes annually. [9]

Despite his substantial political and policy expenditures, Soros has bemoaned the rise of unlimited anonymous political contributions as “indefensible,” [10] and has given millions of dollars to a super PAC which claims an emphasis on removing money from politics.[11]

Jonathan Tivadar Soros is the son of liberal billionaire George Soros.[12] JS obtained a bachelor’s degree from Wesleyan University in 1992 and then a law degree and a master’s in public policy from Harvard’s Kennedy School of Government. [13] [14]

In 1997, Soros married Jennifer Ann Allan,[15] a social worker whom he met while they were both working for President Bill Clinton’s 1992 Presidential campaign.[16]

After law school, Soros served as a law clerk to Judge Stephen F. Williams of the United States Court of Appeals for the D.C. Circuit.[17]

In 2002 Soros began working for his father’s private equity group, a section of Soros Fund Management. In 2004, Jonathan and his oldest brother Robert Soros were named co-deputy chairmen of the company, which at the time controlled the majority of the Soros family’s fortune.[18] He served as the Fund’s president and deputy chairman from 2005 to 2011.[19] In this role, Jonathan served as the fund’s chief investment officer and oversaw the fund’s transition from a hedge fund to a family office focused on managing money for the Soros family and foundation.[20] According to the Washington Post, the Soros family closed their hedge fund to outside investors in order to escape newly enacted federal regulations, a move that “raised eyebrows” due to the fact that the George Soros had previously championed those same regulations.[21]

In 2011, Soros Fund Management declined by about 15%, while according to Reuters the average hedge fund that same year lost only 5%.[22]In April 2012, Jonathan founded the private investment firm JS Capital Management, LLC[23] to manage his own money.[24] He currently serves as chief executive officer at the firm. [25] In 2015, JS Capital Management was worth over $500 million.[26]

In 2020, JS Capital Management expanded its partnership with Closed Loop Partners, an investment firm focused on managing environmental impact and improving sustainability by following the circular economy model, an economic model commonly espoused by climate change activists. [27] [28] JS Capital Management now has a minority stake in Closed Loop Partners after being a limited partner and active co-investor since 2018. [29]

In 2004, Jonathan Soros was an early supporter of the liberal Democracy Alliance.[30] He attended the organization’s initial fundraising presentation alongside his father, and he subsequently headlined other early organizing meetings for the Democracy Alliance.[31] As of 2014, he was a prominent member of the Democracy Alliance and attended the spring investment conference alongside other prominent liberals such as billionaire environmentalist Tom Steyer, Mayor Bill de Blasio (D-New York City), and former Democratic National Committee chair Rep. Debbie Wasserman Schultz (D-Florida).[32]

In 2016, Soros was charged with steering the Open Society Institute’s U.S. Programs’ 2017-2020 strategy development process.[38] At a meeting, Soros discussed how OSF could promote liberal values in the presidential election “as a complement to the more hard-nosed partisan tactics.”[39]

According to a conservative news source, in 2011 alone the Open Society Foundation gave more than $58 million to left-leaning grantees.[40]

Numerous news articles have noted that Jonathan Soros is like his father in that he has supported or helped to run a number of left-leaning political organizations. In 2004, the New York Times Magazine noted that Soros was “deeply involved” in monitoring his fathers’ “political investments day to day.”[41] According to the article, Jonathan was “looking to play a deeper role in the future of Democratic politics” and had traveled “extensively throughout the country” asking his business contacts “for million-dollar checks.” [42]

In the lead up to the 2004 presidential election, Jonathan Soros was associated with left-wing 527 organizing groups[43] Moveon.org and America Coming Together, “two groups campaigning for a John Kerry victory.”[44] Notably, Jonathan was in charge of a controversial advertising contest for Moveon.org that resulted in the republication of advertisements comparing President George W. Bush to Adolf Hitler. These advertisements were later removed from the website and Moveon.org apologized for republishing them.[45]

Soros has served on the boards of directors of the National Association for the Advancement of Colored People’s (NAACP) Legal Defense and Educational Fund. He also served as a board member at the liberal think tank New America and as a senior fellow at the left-wing think tank Roosevelt Institute.[46]

In March 2020, Jonathan Soros co-founded Athletes Unlimited, a sports league that tracks athletes’ individual performance rather than team wins and losses. [47] Currently the league hosts seasons for women’s softball, volleyball, and lacrosse. Athletes Unlimited allows its athletes to choose a charity which will receive donations from the charity based on the player’s earnings. [48] Following George Floyd’s death, players during the softball season chose to wear Black Lives Matter masks during games in support of the movement. [49]

However, Soros has personally given hundreds of donations worth over $3.5 million to various left-wing political candidates and causes over the years.[50] Soros gave over $2 million to the Friends of Democracy Super PAC, hundreds of thousands of dollars to the political action committee arm of Planned Parenthood (Planned Parenthood Votes), $100,000 to Moveon.org Voter Fund, and $20,000 to the Progressive Change Campaign Committee. Additionally he gave over $100,000 respectively to the Democratic Congressional Campaign Committee, the Democratic Senatorial Campaign Committee, over $80,000 to the Democratic National Committee, and over $20,000 to President Barack Obama. Soros has also contributed thousands of dollars to the Brady Campaign to Prevent Gun Violence, the League of Conservation Voters, Hillary Clinton for President, Senate Democratic Leader Chuck Schumer (D-N.Y.), and Senator Elizabeth Warren (D-Massachusetts). [51]

In March 2021, Jonathan Soros donated $25,000 to Austinites for Progressive Reform (APR), a left-leaning PAC based in Austin, TX that aims to reform Texas politics by decreasing “voter suppression.” [52] [53] APR describes Jonathan as “an advocate for campaign finance reform and the abolition of the electoral college.” [54] In Austin’s May 2021 election , APR supported Propositions D, E, F, G, and H. [55] Proposition D, an initiative to change Austin mayoral elections to coincide with presidential election years, passed with 66 percent  approval. [56] Proposition E, which proposed the city use “ranked choice” voting, also passed with 57 percent support. [57] Proposition F, which proposed to replace the city manager with a mayoral council, failed after receiving less than 20 percent support. [58] Proposition G, which proposed to add a city council district, also failed when 56 percent of voters voted against the initiative. [59] Finally, Proposition H, which would have  amended Austin’s public campaign finance program to provide up to $50 in “democracy dollar” vouchers to any registered voter interested in making political contributions to local campaigns. [60]

Jonathan Soros and his wife, Jennifer, created the Jennifer and Jonathan Allan Soros Foundation in 2009. As of 2016, the foundation had $150 million in assets. Since 2011, the foundation has spent approximately $20 million.[61]

Since 2010, the Jennifer and Jonathan Allen Soros Foundation has given millions of dollars in grants to left-leaning organizations including nearly $1,000,000 to the Tides Foundation, $1.2 million to various Planned Parenthood entities, over $400,000 to Center For Reproductive Rights, $600,000 to NAACP Legal Defense and Educational Fund, Inc., $400,000 to Demos, $200,000 to the Brennan Center For Justice, $1.7 million to Public Campaign, and nearly $1.8 million to New America.[62]

The foundation has also given thousands of dollars to the Educational Fund To Stop Gun Violence, the National Audubon Society, Death Penalty Focus, Common Cause Education Fund, and the Progressive America Fund. [63]

Jonathan Soros has championed campaign-finance regulations.   In 2012 Soros founded the Friends Of Democracy PAC (FODPAC), which later merged into the liberal advocacy group Every Voice, to promote campaign-finance reform. Politico said that FODPAC aimed to “get money out of politics,” and labeled it the “PAC to End All PACs.”[70] Similarly, the Washington Post called it an “anti-superpac super pac.”[71]

In 2015, Soros, who has given millions to support left-wing public policy groups and Democratic political candidates and committees, bemoaned the “dramatic rise of ‘dark money’ since Citizens United” and said that unlimited anonymous political contributions was “indefensible.”[72]