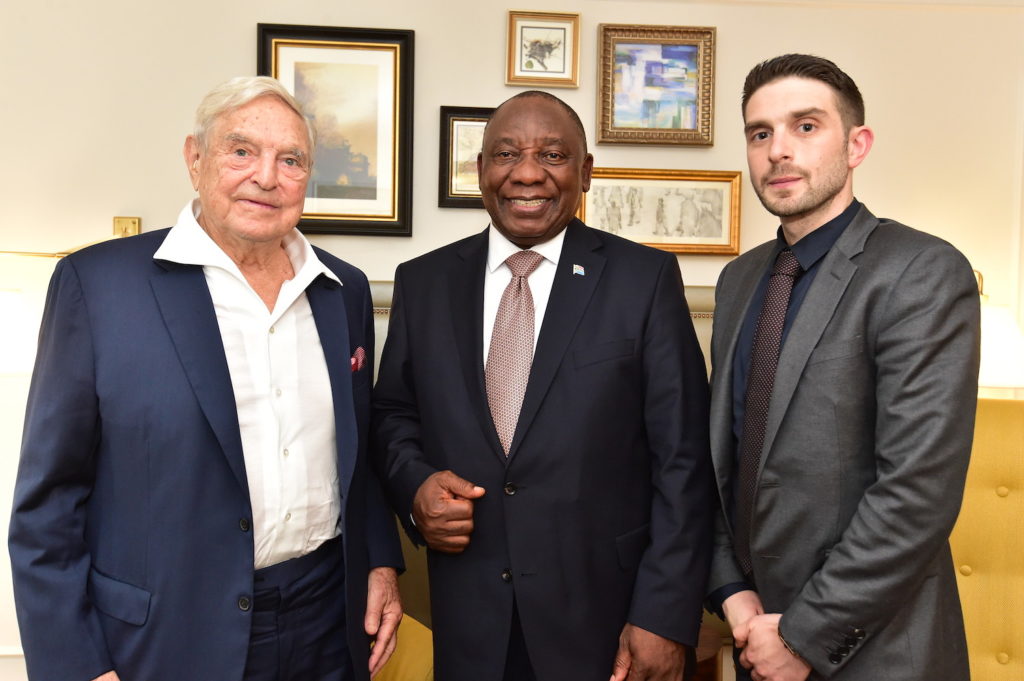 Alexander Soros has created a foundation under his own name which gives awards to activists working to match environmentalism with human rights, sits on a number of left-of-center and non-political philanthropic boards, and is a major Democratic Party donor. [3]

Alexander Soros was born in 1985 to George Soros and his second wife, historian Susan Webner. [4] He was raised in a “privileged bubble” in New York City and Katonah, N.Y. [5] Alexander Soros says that he was relatively distant from his father, and did not enjoy his privileged childhood, preferring to be a more normal child. [6]

In 2009, Alexander Soros graduated from New York University with a Bachelor’s Degree in History. In 2018, he received a Ph.D. in History from the University of California, Berkeley. He was a post-doctoral fellow at Hannah Arendt Center for Politics and the Humanities at Bard College, a university that has had a long-standing relationship with George Soros. [7][8] Alexander was also an honorary fellow at the Institute for Advanced Study at Central European University in Budapest, the university that his father founded in 1991. [9] Alexander is currently a visiting fellow at the Institute Für Die Wissenschaften Vom Menschen (IWM) in Vienna, a nonprofit educational institute founded in 1982. [10] George Soros sits on the board of IWM and has had a relationship with the institute going back to at least 1989. [11][12]

In 2011, Alexander Soros joined the Board of Directors of the Open Society Foundations. [13] That same year, he and Gregory Soros launched an investment firm, Soros Brothers Investments, where Alexander was a managing partner. [14] [15] He is also on the advisory board of Tau Investment. [16]

Alexander Soros said his Foundation would support “more experimental and perhaps controversial projects that larger mainstream foundations might not be able to take on.” However, among the first grants given were to Bend the Arc and Global Witness, organizations for which Alexander Soros sat on the Board of Directors. Bend the Arc, which used to be called Jewish Funds for Justice, is an explicitly progressive Jewish organization which engages in political and cultural activism. It received $250,000 in the Foundation’s first year. [18] Global Witness is an international non-profit which focuses on perceived and actual environmental abuses which also create injustices and other harms around the world. [19] Shortly after its launch, the Alexander Soros Foundation also made grants to the National Domestic Workers Alliance and to Make the Road New York, which advocate for liberal expansionist immigration policies and labor union-aligned employment regulations. [20]

While the Foundation was announced in 2012, it was created in August of 2011. It neither received nor distributed funds during its first year. [21]

In 2015, Alexander Soros co-founded and was chairman of Bend The Arc Jewish Action PAC, a Political Action Committee “focused on representing the views of Jewish Americans” on domestic policy issues like immigration, sexuality, and left-of-center social change. The Bend the Arc PAC backed a variety of Democratic candidates in the 2016 election. [30]

Alexander Soros is Deputy Chair of the Open Society Global Board. He is also a member of the Open Society-U.S. Advisory Board. [31] In this role, Alexander Soros helps to oversee a 2020 budget of $1.2 billion for the Open Society Foundations. Of this, approximately $400 million is spent globally and $261 million in spent in the United States. [32] The Open Society Foundations have existed since 1984, when George Soros first engaged in politically-oriented charitable work under the organization’s umbrella. It currently is among the world’s largest charitable organizations, and focuses on non-political human rights issues as well as explicitly left-of-center issues such as legalizing prostitution and abortion and supporting same-sex marriage and looser immigration laws. [33]

Alexander Soros has said, “I’m actually limiting the number of boards that I go on precisely because I feel it could eventually take up too much of my time. … I’m often asked to join boards and have to decline; I don’t want to become a professional board member.” [34] However, in addition to the two Open Society Foundation Boards, the Alexander Soros Foundation Trusteeship, and the Bend the Arc Jewish Action PAC Board, in 2017, Alexander Soros also sat on the Boards of the “International Crisis Group, Global Witness, Libraries Without Borders, Central European University, and The Gordon Parks Foundation.” [35]

Soros gave $500,000 to International Crisis Group in 2017 to support its work addressing conflict around the globe. [36]

Alexander Soros has said that, “I detest the idea that money is speech, but if the other side is going to do it, you have to do it.” [39]

In 2016, Alexander Soros made $5.8 million in campaign contributions to campaigns, campaign committees and PACs. All of his contributions went to liberal and Democratic groups. This made Alexander Soros the 32nd largest individual contributor in the 2016 election cycle. [40] Major donations went to Senate Majority PAC ($3.5 million) and Priorities USA Action ($1 million). [41]

In 2018, Alexander Soros was the 50th largest contributor in the United States, donating $2.9 million to campaigns and campaign organizations. [42] He donated approximately half of the money which was received by People’s Lawyer PAC, which supported former U.S. Rep. Keith Ellison (D-MN) in his successful race to become Minnesota Attorney General. [43]

Alexander Soros has said that “When Trump was elected, I wasn’t surprised—I was sad. Since Trump’s election, I have been waking up every morning and saying to myself, the world is in danger. I have to do whatever I can to prevent that danger.” [44]

He has continued to donate, albeit at lower levels, to Democratic campaigns, campaign committees and PACs in the 2020 cycle. [45]

In 2016, Alexander Soros identified himself as “an avid supporter of many progressive politicians, including Gavin Newsom, who is running for Governor of California in 2018, Tammy Duckworth, who is running for Senator in the state of Illinois in 2016 election cycle, and Hillary Clinton.” [46]

Views on Israel and Jewish Issues

When it comes to Israel and Palestine, I believe in consistency. If there’s one problem I have with the American Jewish community it’s that it is at times rather inconsistent on the subject. I think that Jews have supported progressive causes because of the better part of their nature and that’s a great legacy; it’s really a part of Jewish exceptionalism. But I worry when Jews in America start to support policies in Israel which they wouldn’t support in America, which don’t allow for separation of church and state, which don’t give full rights to people who are technically living under occupation, and which don’t allow for immigration of people who aren’t Jews, or for non-Jews to become citizens. This is a problem because it gives credence to the old adage that Jews are liberal or left-wing only for their own self-interest; that they want a color-blind society with all these different ethnic groups because it makes them safer. So I think that whether you keep your values consistent is a true test. A lot of Americans Jews do support one thing here and another thing there and that’s inconsistent. [49]

Writing in the South Florida Sun-Sentinel ahead of the 2016 election, Alexander Soros argued that “Israel is not a major issue for how American Jews decide their vote,” that they “vote primarily on domestic issues,” and that “sheer folly to think that any amount of rightward tinkering on the part of Democrats will serve either their Jewish voters, or the party as a whole.” The article was entitled, “How Hillary Clinton wins Florida and the Jewish vote.” While Hillary Clinton did carry 70% of Jewish voters, Donald Trump won Florida. [50] [51]

Writing in Politico, upon the launch of the Bend the Arc Jewish Action PAC, Alexander Soros rejected the stereotype that “American Jews are single-issue voters whose only concern is the safety of Israel,” pointing out that the 2012 Public Religion Research Institute survey found that only 4% of Jewish voters identified Israel as the most important issue for their vote. [52]

In the New York Daily News, Alexander Soros condemned Roseanne Barr’s unfounded allegation that George Soros had collaborated with the Nazis. On the contrary, Alexander Soros argued, his father was a child, and a victim of the persecution, not a collaborator. [53] George Soros survived the Holocaust in part because he was hidden from Nazi persecution; his father sent him to live with a man who pretended Soros was his Christian godson. [54]

In 2018, in the aftermath of a series of attempted mail bombs sent to prominent political figures, including his father, George Soros, Alexander Soros wrote a New York Times opinion piece decrying “the new normal of political demonization that plagues us today,” tying it to President Donald Trump’s political campaigns. [57]

After his father founded a Democratic-aligned PAC in 2019, Politico reported that Alexander Soros and other family members may contribute to the PAC. [58] As of April 27, 2020, publicly available reports indicated that this had not happened. [59]

On March 31, 2020, Alexander Soros published an op-ed with Project Syndicate in which he urged the European Union to step up and lead to stop the spread of COVID-19. He said that the Open Society Foundations was dedicating millions of dollars to help Europe overcome the pandemic, and that the EU should engage more with its member nations, especially in light of international withdrawal by the Trump administration. [60]

In 2020, Alexander Soros retweeted an unsubstantiated claim by Bend the Arc PAC that COVID-19 pandemic-related anti-Semitism was on the rise, and that President Donald Trump was to blame. [61]

Alexander Soros was falsely accused by Rep. Steve King (R-IA) and others of being the whistleblower whose second-hand allegations of improper acts by Trump with regards to Ukrainian foreign aid led to Trump’s impeachment. It appears that King, who first made the accusation, misidentified Soros from a photo. [62]

Alexander Soros was also accused by singer Taylor Swift of engaging in a profitable business deal at Swift’s expense. Soros is a major investor with a company which in 2019 bought the rights to Swift’s songs while Swift had been seeking those rights herself. [63]

In April 2020, pop star Taylor Swift and Alexander Soros found themselves in a controversy with one another regarding an album of Swift’s being released without her permission by the record label company Big Machine, which is backed by Soros. Swift addressed her fans in an Instagram story, informing them that the concert in question was performed in 2008 on the radio, when she was 18 years old, and that it was being released without her approval. She claimed that this was due to music agent Scooter Braun, owner of Big Machine Label Group, [64] and what she called his “financial backers” — 23 Capital, the Carlyle Group, and Alex Soros — feeling the urge to make more money off her work. “[They] have seen the latest balance sheets and realized that paying $330 MILLION for my music wasn’t exactly a wise choice and they need money,” she wrote. [65] [66]

Scooter Braun’s Ithaca Holdings, a holding company that Braun used to purchase the rights to Swift’s music, is heavily backed by investments from Alexander Soros. Swift claimed that Alexander Soros thereby financially aided Braun’s purchase of her records in 2019, and by extension has contributed to Braun’s decision to release her 2008 radio performance. [67]

Swift finished her Instagram story with a condemnation of Braun and his financial partners’ actions. “Just another case of shameless greed in the time of Coronavirus. So tasteless, but very transparent.” [68] These remarks caught the attention of Bend the Arc Jewish Action, a left-of-center social advocacy that Alexander Soros not only chairs, but was the group’s founding chair. [69] “Hey Taylor Swift,” the official Bend the Arc Twitter account wrote, “You have every right to be upset about others profiting off your music. But PLEASE don’t share antisemitic conspiracy theories about the Soros family. “Shameless greed” is a dog-whistle used against Jews. Your Jewish fans deserve better.” [70]