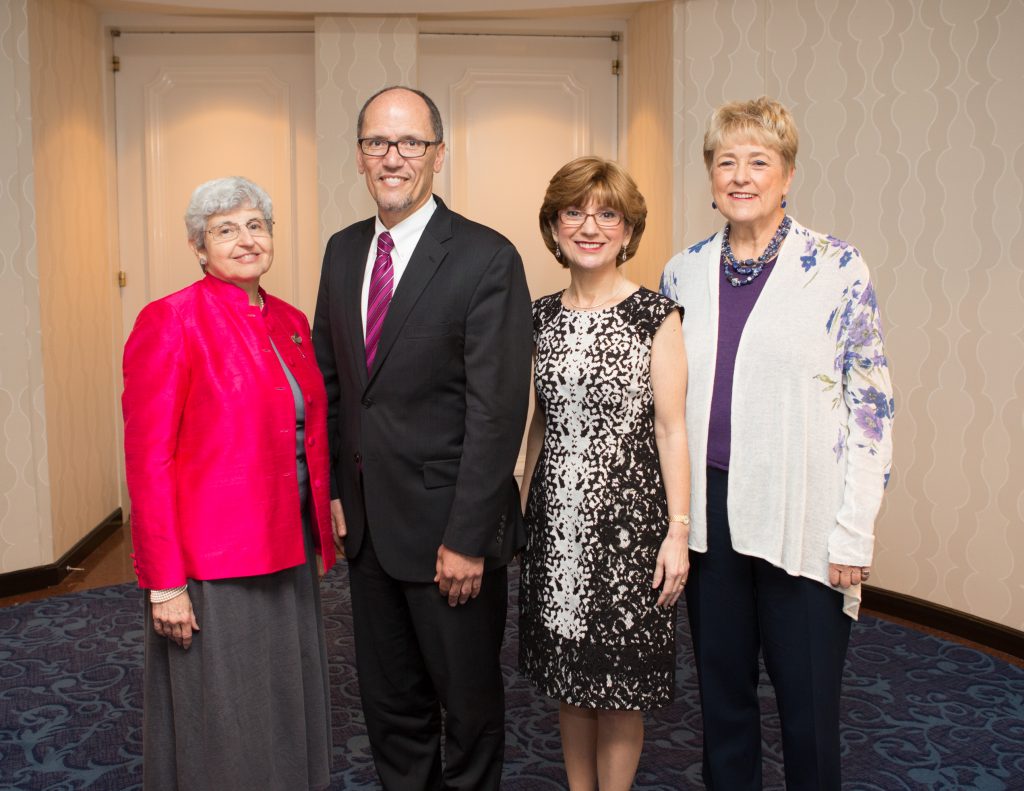 The National Partnership for Women & Families (NPWF) is a Washington, D.C.-based advocacy group. The group, which is a 501(c)(3) charitable organization under IRS tax rules, takes left-of-center stances on abortion, economics, and judicial nominations. The group is critical of Republicans and supports left-of-center policies.

The NPWF was founded in 1971 as the Women’s Legal Defense Fund (WLDF). [1] Judith Lichtman became the first executive director of the WLDF in 1974. [2] Lichtman built the WLDF into one of the left’s most prominent women’s organizations over her 30 years as executive director and president of the organization. Since stepping down as president in 2004, Lichtman has remained a senior advisor at NPWF. In 1998, WLDF changed its name to NPWF to reflect that the organization had shifted its focus away from litigation to “legislative lobbying and advocacy before administrative agencies.” [3]

Increasing the accessibility of abortion is a stated goal of NPWF; the organization has criticized laws that require a mandatory waiting period or an ultrasound before an abortion is performed. [4] The group has also advocated loosening restrictions on late-term abortions. [5]

NPWF lashed out at Secretary of Education Betsy Devos for reforming the department’s guidance regarding sexual assault disciplinary procedures under Title IX. [7] The Obama administration’s guidance had forced colleges to use the lowest evidentiary standard in sexual assault cases. That stance was so radical that “even some liberal legal figures took issue … arguing that no student should be punished unless the school was more certain that a line had been crossed.” [8]

Ties to the Clintons

In 1994, WLDF held a luncheon to celebrate the 20th anniversary of Lichtman being with the organization. Then-First Lady Hillary Clinton spoke at the event and was introduced by Lichtman. During her speech, Lichtman said she had known Clinton since she was a law student in the early 1970’s. Lichtman said “In all of our work on healthcare reform and on other issues we have an advocate, a leader, and a role model in the White House. Her name is Hillary Rodham Clinton.” [9] After being introduced, Clinton thanked Lichtman for her work at the WLDF on behalf of left-of-center causes. The focus of Clinton’s speech was advocating for her controversial “Hillarycare” healthcare plan that would later fail in Congress.

In 2012, Hillary Clinton returned to speak at NPWF luncheon. To introduce Clinton, NPWF made a tribute video called “Hillary Clinton Our Girl” which featured prominent Democratic Rep. John Lewis (D-GA). [10] Clinton spoke about her long friendship with Lichtman and recalled working with her in Arkansas more than 20 years before. Clinton reportedly delayed going to the Rio+20 United Nations Conference on Sustainable Development so she could be at the luncheon. [11] Clinton also thanked Debra Ness, president of NPWF, and Ellen Malcolm for their leadership on behalf of left-of-center causes.

WLDF was also supportive of President Bill Clinton. After winning the 1992 election, Bill Clinton considered appointing Brooksley Born, a founding member of WLDF, as his Attorney General. [12] In 1993, the first piece of legislation President Clinton signed into law was the Family and Medical Leave Act (FMLA). The FMLA was the top priority for WLDF for almost a decade. Lichtman displayed WLDF’s close ties to the legislation and the Clinton White House when she said “We have the first pen [President Clinton] used to sign the bill and framed it right here in our office.” [13] During the Clinton administration, Lichtman was appointed to the federal Judicial Nominating Commission by Delegate Eleanor Holmes Norton (D-DC). [14] In 2001, Litchman said President Clinton was a “brilliant political leader” and said that he would have “an extraordinarily positive legacy.” [15]

In 2007, Bill Clinton spoke at NPWF’s annual luncheon. Ness lauded the big government programs in education and healthcare that Clinton enacted when he was in office and said Clinton was “a President who was a true partner in our work.” [16] He said after leaving office the piece of legislation he received the most praise for signing was the FMLA championed by NPWF. Clinton also spoke in favor of increasing the minimum wage, increasing income taxes environmentalist policies of then-New York City Mayor Michael Bloomberg, and universal government healthcare. [17]

NPWF’s record of supporting left-wing judicial policy dates back more than 40 years. In the 1970’s, WLDF partnered with the American Civil Liberties Union, NAACP, National Organization of Women, and League of Women Voters to advocate for the appointment of left-of-center women to the federal courts. [18]

NPWF ties to U.S. Supreme Court Justice Ruth Bader Ginsburg also date back to the 1970s. Ginsburg was involved with writing the Pregnancy Discrimination Act of 1978, the passage of which was WLDF’s biggest achievement at the time. [19] In 1979, when President Jimmy Carter appointed Ginsburg to the U.S. Court of Appeals for the D.C. Circuit, Lichtman endorsed Ginsburg’s nomination. [20] Lichtman also spoke out in favor of Ginsburg’s appointment to the Supreme Court saying, “Ruth Ginsburg was the pioneer, the leader, the architect of establishing modern day constitutional protections for women against sex discrimination.” [21]

Opposition to Bork and Thomas

In 1987, WLDF became one of the leading groups opposing the nomination of Judge Robert Bork to the Supreme Court. In an interview Lichtman said WLDF “had a very central role in mapping the strategy,” to oppose Bork, “which included a very sophisticated communications and public-affairs strategy, a legislative and lobbying strategy, and a grass-roots and grass-tops organizing effort.” [22]

Before then-Senator Joe Biden (D-DE), at the time chairman of the Senate Judiciary Committee, announced he would oppose Bork’s confirmation, he met with left-wing groups including WLDF, NAACP, and the Alliance for Justice to promise them he would be the leading voice opposing Bork. [23] WLDF group painted Bork as out of touch with Americans views on women’s rights and aided his failure to be confirmed by the Senate.

When liberal Supreme Court justice Thurgood Marshal stepped down from the bench in 1991, WLDF issued a statement saying it “is a terrible loss for the entire nation…. Our country is at a frightening crossroads.” [24] After Clarence Thomas was nominated to replace Marshall, Lichtman testified before the Senate Judiciary Committee on his nomination. [25]

Lichtman stated that Thomas’s appointment would be detrimental to women’s rights, including access to abortion. Thomas’s past criticism of Roe v. Wade and his ability to impartially consider abortion issues before the court were the largest concerns Lichtman raised to the committee. She said that the committee should reject any nominee that was not pro-abortion. Lichtman also attacked Thomas for not rejecting that women are less likely to work in “fields such as construction work, lumberjacking, coal mining, and the like.” [26][27]

WLDF became more involved in Thomas’s confirmation hearing when Anita Hill accused Thomas of sexually harassing her. Anita Hill received advice from the WLDF and Lichtman made statements to the media defending Hill. [28] [29] While WLDF opposed Thomas before Hill’s allegation Lichtman admitted that it was Hill’s allegation that made the proposition of defeating Thomas “into one that was possibly winnable.” [30] As part of the investigation into how Anita Hill’s allegation was leaked, Lichtman was interviewed by the special counsel. [31] No independent tribunal ever substantiated Hill’s charges. [32]

NPWF opposed the confirmation of Trump administration nominees Brett Kavanaugh and Neil Gorsuch to the Supreme Court. NPWF claimed that Kavanaugh’s statement to Senator Susan Collins (R-Maine) that Roe v. Wade (the Supreme Court case establishing a legal right to elective abortion) is settled law did not reflect his real views and that his confirmation would lead to the curtailment of abortion. [33] NPWF asserted that any appointment President Trump attempts to make to the Supreme Court would be under a “partisan cloud” because Michael Cohen’s arrest may cause the President to become the subject of a criminal investigation. [34]

NPWF labeled Gorsuch’s nomination “truly alarming” and “an affront.” [35] The group citied Gorsuch allowing Planned Parenthood to be defunded as a reason to oppose his nomination. [36] NPWF additionally feared that Gorsuch would seek to overturn Roe v. Wade. [37]

In contrast to the organization staunch opposition to President Trump’s Supreme Court nominees, NPWF endorsed each of President Obama’s nominees. The confirmation of both Sonia Sotomayor and Elena Kagan were lauded by NPWF as victories for their cause. [38] [39] NPWF called on the Senate to quickly confirm Merrick Garland, which would have caused the Supreme Court to swing to the left in the middle of a Presidential election year after the death of conservative Justice Antonin Scalia. [40]

After the 2018 midterm elections showed a Democratic majority in the House of Representatives. In a press release on election night, NPWF said that Democrats had “a mandate to be bold and progressive.” [41]

Following the 2018 midterms, when Democrats were debating whether or not to elect Nancy Pelosi (D-CA) as Speaker of the House, NPWF praised Pelosi and all but endorsed her for speaker. [42] NPWF thanked Pelosi for her undying support for Obamacare and a left-of-center economic agenda and stated in a press release: “We look forward to working with Nancy Pelosi as speaker of the House” while her election to the Speakership was in dispute. [43]

NPWF gave Barbara Mikulski (D-MD) the organization’s first Lifetime Achievement Award. Mikulski received the award in recognition of being the longest serving woman in congressional history and for her left-wing views such as favoring abortion rights. The event also honored Sylvia Burwell, who served as the Secretary of Health and Human Services under the Obama Administration, and Senator Kirsten Gillibrand (D-NY). [44]

Every member of NPWF’s executive team is a prodigy of other left-wing groups and political campaigns. Debbie Wilkes, NPWF’s chief of staff, worked for Senator Barbara Mikulski (D-MD) and worked in the chief of staff’s office for Bill Clinton’s U.S. Trade Representative Charlene Barshefsky. [49] Sarah Fleisch Fink, general counsel and director of workplace policy, worked for both the Center for American Progress and David Axelrod and Associates (now AKPD Message and Media), the political consulting firm of David Axelrod and David Plouffe, top political advisors to President Barack Obama. [50] Sarah Lipton-Lubet is a vice president at NPWF who had roles with both the American Civil Liberties Union and the Center for Reproductive Rights. [51] Another vice president at NPWF, Katie Martin, formerly served as Counselor to Sylvia Burwell, Health and Human Services Secretary in the Obama administration. [52] Vicki Shabo, another vice president at NPWF, worked at the Democratic political consulting firm Lake Research Partners. [53] The vice president for marketing and communication, Amaya Smith, worked at the AFL-CIO and during 2008 was the South Carolina Press Secretary for the Obama for America campaign. [54] Debbie Stillman, the vice president of development, worked at the National Council of Jewish Women. [55]

According to the Federal Elections Commission, Lichtman has donated to many Democratic candidates. Lichtman’s financial support for Hillary Clinton dates back to Clinton’s first run for U.S. Senate in New York during the 2000 election. Lichtman’s support continued through Clinton’s Senate campaign in 2006, and the 2008 and 2016 presidential campaigns. Democratic Senators that received a donation from Lichtman include Elizabeth Warren (D-MA), Sherrod Brown (D-Ohio), Kay Hagan (D-NC), and Claire McCaskill (D-MO). Additionally, Lichtman has reliably donated to EMILY’s List.