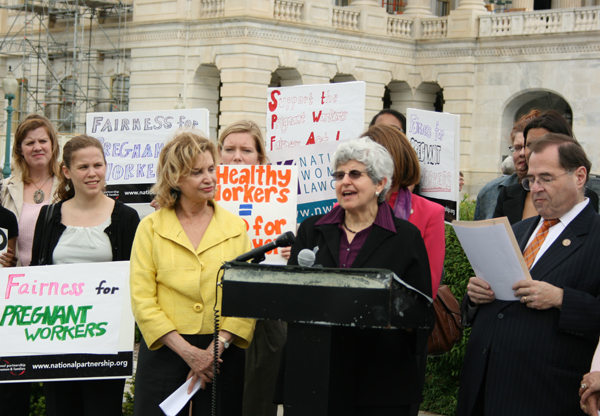 Judith Lichtman is a lawyer who is known for her work on left-of-center women’s issues. She is best known for supporting the passage of the Family and Medical Leave Act of 1993 (FMLA), which mandated that employers provide workers 12 weeks’ unpaid leave to attend to a seriously ill family member or for pregnancy.

Currently, Lichtman serves as the senior adviser to the National Partnership for Women and Families. She has also served on the boards of numerous left-wing organizations and even helped found one.

Lichtman was born in New York in a politically left-wing household. She described her parents in an interview as “politically progressive people who have influenced me greatly.” [1]

Her parents urged her to go the University of Wisconsin-Madison to study American history and government. “The university was known as the hotbed of progressive political thought, and it was a place to go if you were interested in American studies,” she says in an interview.[2]

Lichtman received her law degree from the University of Wisconsin in 1965. She has said that she “went to law school because being a lawyer gave me a license for activism.”[3]

Her first job out of law school was for what was then the U.S. Department of Health, Education, and Welfare working on school desegregation in the South. In 1968, she joined the faculty of Jackson State College in Mississippi. [4]

Then she returned to Washington, D.C., to work with the Urban Coalition on school desegregation. Then she went to work for the U.S. Commission on Civil Rights.[5]

Then in 1972, she worked for the failed presidential campaign of U.S. Senator George McGovern (D-S.D.). After the 1972 election, she served as legal adviser for the Commonwealth of Puerto Rico.[6]

In 1974, Lichtman became the first paid staffer when she became director of what was then known as the Women’s Legal Defense Fund. The organization was founded in 1971 to combat sex discrimination. In 1988, she became its president. In February 1998, the WLDF was renamed the National Partnership for Women and Families. [7]

In 2004, Lichtman stepped down as president and executive director. She has since become a senior adviser to NPWF.[9]

In 2018, Lichtman appeared on National Public Radio (NPR) to attack the appointment of Roger Severino, a devout Catholic, to an office at the Department of Health and Human Services that exists to protect religious freedom. Lichtman said it was “pretty abhorrent” that Severino would defend the religious freedom of those who opposed contraception and abortion.[10]

In addition to her work with NPWF, Lichtman is involved with the professional left in other organizations. She is a co-founder of EMILY’s List, an organization that works to elect pro-abortion Democratic Party women.[11] She also currently serves on its board.[12]

She serves as chair of the Leadership Conference on Civil and Human Rights.[13] She also serves on the board of the Center for American Progress [14] and the board of advisers for the American Constitution Society. [15]

She was formerly on the board of Equal Justice Works.[16]