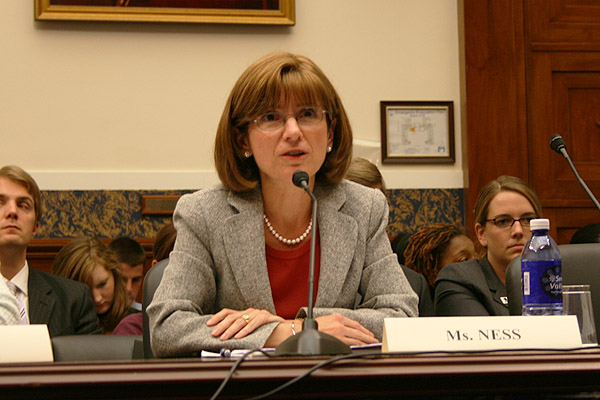 Debra L. Ness is the president of the National Partnership for Women and Families (NPWF) and has been with the organization since 1991. [1] NPWF advocates left-of-center stances on abortion, economic policies, and judicial nominations. Prior to working at NPWF, Ness worked at NARAL Pro-Choice America (formerly the National Abortion Rights Action League) and the Service Employees International Union. [2]

Ness worked at the Service Employees International Union as director of adult education and career development efforts, and later helped local unions with strategic planning and organizational development. [3] She later headed field operations for NARAL and become the organization’s deputy director in 1989. [4]

National Partnership for Women and Families

Ness joined National Partnership for Women and Families as the executive vice president in 1991, when it was still called the Women’s Legal Defense Fund. [5] She became the president of NPWF in 2004 when Judith Lichtman stepped down. [6]

In her capacity as NPWF’s president, Ness regularly issues statements on behalf of NPWF. She has advocated for access to late-term abortions, government funding for abortion provider and pro-abortion advocacy network Planned Parenthood, and abortion coverage for women in immigration detention facilities. [7] [8]

Both of President Trump’s nominees to the Supreme Court, Brett Kavanaugh and Neil Gorsuch were met with opposition from Ness and NPWF. Ness claimed that any appointment President Trump attempted to make to the Supreme Court would be under a “partisan cloud” due to investigations surrounding the President. [10] Ness called Gorsuch’s nomination “truly alarming” and “an affront.” [11] Ness attacked Gorsuch over his ruling allowing Planned Parenthood to be defunded and his potential to overturn Roe v. Wade. [12] [13] In contrast to her opposition to Trump’s nominees, when President Obama nominated Merrick Garland, Ness demanded he be swiftly confirmed. [14]

It was announced on April 7th, 2021, Debra Ness will step down as President of the organization at the end of the year.[15] She was succeeded by Jocelyn Frye. Frye previously worked in the Obama Administration and the Center for American Progress.

Ness is involved in a host of left-wing organizations in addition to NPWF. Ness is a member of the Leadership Conference on Civil and Human Rights executive committee, which like NPWF fights for a left-wing judiciary. [16] The left-of-center labor union-backed Economic Policy Institute also counts Ness as one of its board members. [17]

Ness has authored blog posts for MomsRising, a progressive group that advocated for gun control, government welfare programs, and illegal immigrants. [18] In one of her posts she called Obamacare “the greatest advance for women’s health in a generation.” [19] In another she voiced support for the FAMILY Act, a Democratic-backed bill that would mandate paid family leave. [20] [21]

Working Mother, a left-of-center magazine, recognized NPWF as one of the 100 most important organizations supporting expanded government intervention in the workplace and healthcare. [22] The article, written by Ness, talked about NPWF’s history and how its ideas, such as mandatory paid leave from work, had gone from the fringe in the 1980s to the mainstream of the left today.

Ties to the Clintons

The Clintons and NPWF are longtime allies and Ness’s actions reflect this connection. In 2007, when introducing former President Bill Clinton at a NPWF luncheon, Ness thanked Clinton for championing government education and healthcare programs. [23] She even called Clinton “a President who was a true partner in our work” for his dedication to NPWF policies such as the Family and Medical Leave Act. In 2012, Hillary Clinton recognized Ness for her devotion to NPWF and its left-of-center causes when Clinton spoke at the NPWF luncheon. [24]

Ness is an active Democratic donor according to the Federal Elections Commission. She has contributed to the campaigns of Hillary Clinton, Senator Debbie Stabenow (D- MI), Senator Tammy Baldwin (D-WI), and Senator Christopher Dodd (D-CT). She has also supported the Emily’s List political action committee.