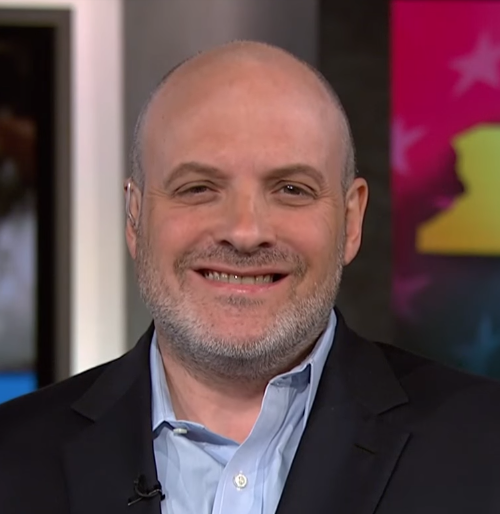 Howard Wolfson is a Democratic political strategist and the former New York City Deputy Mayor for Government Affairs and Communications. Wolfson is best known as a close advisor to Hillary Clinton (D-NY) on her 2000 Senate run and 2008 presidential campaign, and then to New York City Mayor Michael Bloomberg. After serving as one of Mayor Bloomberg’s deputy mayors, Wolfson has primarily focused on running his political action committee, Independence USA Super PAC, and the education program of Bloomberg Philanthropies.

In 2002, Wolfson married Mary “Terri” McCullough, chief of staff for House Speaker Nancy Pelosi (D-CA). McCullough also worked with Hillary Clinton when she ran No Ceilings, a project financed by the Clinton Foundation. [1]

Howard Wolfson grew up in Yonkers, New York. Both of his parents were teachers, with his mother and stepmother being members of the United Federation of Teachers. Wolfson has been described as being “surrounded by card carrying liberal[s]” in his childhood, including his grandparents and parents. [3]

In 1989, Wolfson graduated from the University of Chicago, and then became a reporter for the Fairfax Connection in Fairfax, Virginia, but he soon became disillusioned with journalism. Wolfson then earned a master’s degree in history from Duke University in 1991,[4] initially with the intention of entering academia. Instead, he decided to enter politics. [5]

In the early-1990s, Howard Wolfson began his political career by holding numerous political staffer positions in Washington DC with then-Reps. Jim Jontz (D-IN) and Bob Matsui (D-CA). In 1993, Wolfson began to work with Rep. Nita Lowey (D-NY) from near his hometown in New York. He initially served as her press secretary and then as chief of staff. Wolfson and Lowey developed a close relationship, with Lowey referring to Wolfson as a “surrogate son.” [6][7]

In 2000, Lowey planned to run for U.S. Senate from New York. However, the Democratic Party withdrew its unofficial support when First Lady Hillary Clinton (D-NY) decided to run. Wolfson joined Clinton’s campaign as press secretary instead and soon became a close advisor; she was known to call Wolfson, “Wolfie.” [9] Wolfson nearly died during a campaign event when he ate taffy at a state fair which contained peanut butter and triggered his peanut allergy, but he was saved by White House medics. [10] Wolfson was repeatedly mocked by David Letterman and other media figures for shielding media-shy Clinton from appearances and being rude to the press. Wolfson and other advisors eventually persuaded Clinton to communicate with the press more often. [11]

In 2001, Lowey became chairman of the Democratic Congressional Campaign Committee (DCCC). She offered Wolfson the second-highest position in the organization, but he was initially reluctant, partially due to not wanting to move from Manhattan to Washington, D.C. He was eventually persuaded and took the job with a $150,000 salary. He maintained his New York residence while working out of hotels in Washington. [12]

In his role, Wolfson was known as the de facto manager of the DCCC while Lowey acted as the organization’s front person. The duo received early criticisms for funneling much of the DCCC’s ad money through a small number of consultants with connections to House Minority Leader Dick Gephardt (D-MO), and for being unreceptive to input from rank-and-file Democrats. [13]

In 2004, Wolfson was called in to support the fledgling presidential campaign of then-Sen. John Kerry (D-MA). In 2006, Wolfson again worked with Sen. Hillary Clinton on her reelection campaign. [14] In the same year, Wilson advised now-Sen. Kirsten Gillibrand’s (D-NY) successful campaign for the U.S. House. [15]

In 2008, Wilson became the communications director for Senator Clinton’s unsuccessful 2008 presidential campaign. After Clinton was defeated in the Democratic primary by Sen. Barack Obama (D-IL), Wolfson joined Fox News as a contributor. [16] In the final months of the election, Wolfson wrote a blog called “The Flack” for The New Republic. [17] Later in the year, Wilson joined the Democratic communications and strategy firm Glover Park Group to work as a campaign strategist. [18]

The following year, Wolfson left the firm to work full-time on the reelection campaign of Mayor Michael Bloomberg (D). [19] Upon winning, Mayor Bloomberg appointed Wilson deputy mayor for government affairs and communications, a position he held until 2013. Wolfson has remained a close Bloomberg advisor ever since. Wolfson was appointed the head of Bloomberg Philanthropies’ education program. Wolfson also ran Mayor Bloomberg’s self-financed political action committee, Independence USA Super PAC, and led a $110 million effort to flip the U.S. House of Representatives in favor of Democrats in 2018. [20][21] These two roles have been Wolfson’s primary focus after leaving his official position in the New York City government. [22]

In 2010, Wolfson became an adviser to the gubernatorial campaign of Ned Lamont (D-CT). Lamont would lose the election but later become governor in 2019. [23]

Wolfson reportedly organized plans for Mayor Bloomberg to run for president in 2016, though he would ultimately decline to run. The Washington Post noted that Wolfson was one of four key advisers from Senator Clinton’s 2008 presidential campaign who didn’t join her 2016 campaign. [24] However, Wolfson hosted a fundraiser[25] and personally donated $10,000 to Senator Clinton’s presidential campaign. [26]

In 2020, Wolfson was a key adviser in Bloomberg’s presidential run. After a poor showing by Mayor Bloomberg in a February debate, Wolfson took personal responsibility for failing to adequately prepare the mayor. [27]

Wolfson sits on the board of directors of the University of Chicago’s Institute of Politics. [28]

Howard Wolfson is an outspoken proponent of pro-bike policies. As deputy mayor, he attempted to encourage the administration to expand bike lanes throughout New York City, and he attracted attention for Tweeting a barrage of well-received #bikeNYC tweets. [29] His Twitter account biography as of July 2021 states he is a member of the “Vast Bike Wing Conspiracy.” [30]

Howard Wolfson gave small sums to Democratic candidates throughout the 2000s and 2010s, but considerably stepped up his donations in recent election cycles. In the 2020 election cycle, Wolfson gave over $170,000 in total,[31] including $66,000 given to President Joe Biden’s presidential campaign, and over $23,000 given to the Democratic National Committee. In previous years, Wolfson had given $10,000 to the Democratic Congressional Campaign Committee (2018) and $10,000 to former Senator Hillary Clinton’s (D-NY) presidential campaign. [32]