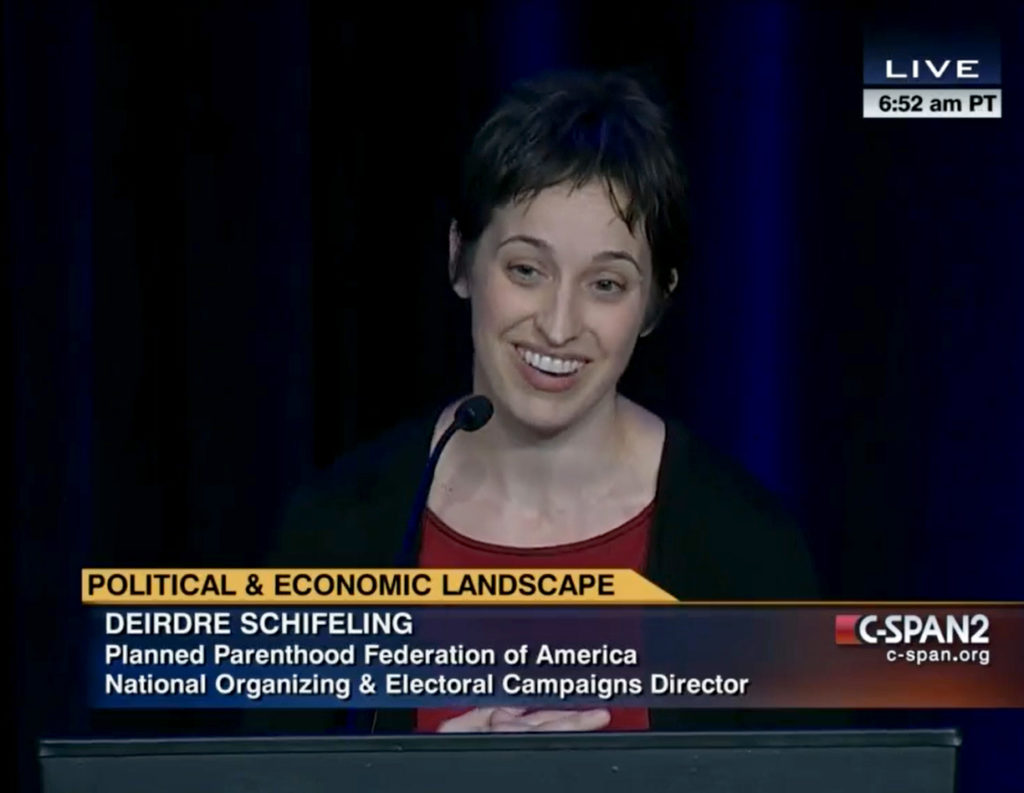 Deirdre Schifeling is a left-of-center political operative, pro-abortion activist, and former executive director of the Planned Parenthood Action Fund. In 2019, Schifeling founded Democracy for All 2021 Action to help generate a wave of left-progressive legislation should then-President Donald Trump lose the 2020 election. Schifeling was also the leader of the Fight Back Table and the coordinator of Democracy Defense Coalition, organizations which prepared to hold mass protests if former President Trump won the 2020 election or contested its results. [1]

Schifeling began her career as a labor union organizer for the United Steelworkers of America (USW). She was also an organizer for the left-wing Working Families Party in New York and is a co-founder of the Center for Working Families, a left-of-center advocacy organization.  A Sarah Lawrence graduate, she is the wife of Peter Colavito, former chief of staff for New York City Mayor Bill de Blasio (D) and former senior advisor to the president of the controversial, left-of-center Service Employees International Union (SEIU). [2]

That same year, Schifeling and Planned Parenthood Votes partnered with Emily’s List on an advertising campaign that unsuccessfully opposed U.S. Senator Pat Toomey’s (R—PA) reelection campaign, spending $1.1 million in that state on television and digital advertising. During the campaign, Schifeling compared Sen. Toomey to a “termite” eroding women’s rights and suggested that he was blocking women from receiving cancer screenings. [4]

The campaign led by Schifeling was also found to contain misleading information. One advertisement featured breast cancer survivor Mary Lou Magyarits, who connected the early detection of her breast cancer to Planned Parenthood. At the time, fact-checkers with the left-leaning Washington Post had already shown that Planned Parenthood did not actually administer mammograms, but only provided outside referrals for them. [5]

Schifeling resigned alongside other Planned Parenthood executives following the appointment of Leana Wen as president of Planned Parenthood in 2019. At the time, media outlets speculated that these departures were due to Wen’s decision to focus on the medical rather than political aspects of the abortion debate. Schifeling denied this, claiming that her resignation was intended earlier and only delayed by the surprise failure of Hillary Clinton’s presidential campaign. [6]

Democracy for All 2021 Action

After leaving Planned Parenthood, Schifeling founded the left-of-center Democracy for All 2021 Action. Democracy for All 2021 Action is a left-of-center project of Arabella Advisors’ Sixteen Thirty Fund, a noted “dark money” organization. Schifeling founded the organization in 2019, with the hopes of implementing a surge of left-progressive legislation under a Democratic presidential administration if President Trump lost the 2020 election. The group has opposed Puerto Rican statehood and claims to advocate for self-determination for Puerto Rico, despite a November 2020 non-binding referendum in which a majority of Puerto Ricans voted in favor of statehood. [7]

In contrast to its stance on Puerto Rico, Democracy for All 2021 has also advocated for re-defining the District of Columbia as a state. In a September 2020 article in left-wing British newspaper the Guardian, Schifeling equated the reluctance to declare Washington, D.C. a state with racism, claiming that the lack of D.C. statehood is “rooted in racism and white supremacy.” In the same article, Schifeling, a longtime political operative, claimed, “Political power in D.C. has always been about undermining people of color.” [8]

Democracy for All 2021 has also worked to reinstate Section 5 of the 1964 Voting Rights Act, which allows for strict federal governmental control over any proposed changes to voting procedures in specific, primarily Southern localities. This section, which was originally meant to expire after five years and apply only to certain states, was struck from that Voting Rights Act by the U.S. Supreme Court in the 2013 case of Shelby County v. Holder. [9]

The group also advocates for an end to out-of-pocket costs for the naturalization of immigrants, supports the unionization of public service employees, and advocates for a massive redrawing of congressional districts to eliminate what it styles as “gerrymandering.” [10]

Fight Back Table and the Democracy Defense Coalition

Schifeling was also the leader of the Fight Back Table, a coalition of left-leaning activist groups founded in 2016. Under Schifeling in 2019, the Fight Back Table began to initiate “war-game” scenarios and planned mass protests in the event that then-candidate Joe Biden lost the 2020 election. Fight Back Table includes some of the largest, most influential groups on the political left, including the Democracy Alliance, Color of Change, MoveOn, the National Domestic Workers Alliance, People’s Action, and Transition Integrity Project. [11]

During the organization’s largest meeting, entitled the Democracy Defense Nerve Center, one proposed scenario ended with California, Washington, and Oregon threatening to secede from the union unless the Trump administration met certain demands. The desired concessions, some of which mirror the aims of Democracy for All 2021 Action, included statehood for D.C., the abolition of the Electoral College, and the division of California into five states to give its population a greater hold on the U.S. Senate. [12]

Schifeling was also the coordinator for the Democracy Defense Coalition, a coalition of many the same left-of-center organizations which worked to support left-leaning election administration policies during the 2020 election. After the election, the Democracy Defense Coalition opposed legal challenges to the election posed by the Trump campaign. [13]