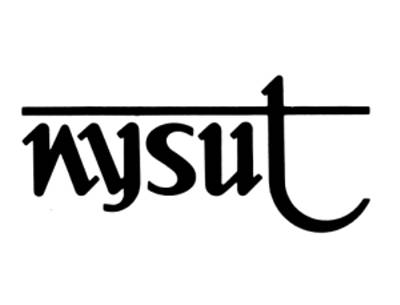 This is a logo for New York State United Teachers. (link)

New York State United Teachers (NYSUT) is a left-of-center labor union closely affiliated with the American Federation of Teachers (AFT), the National Education Association (NEA), and the AFL-CIO. The union includes 600,000 teachers, administrative workers, and healthcare workers in the state of New York.

NYSUT engages in grassroots initiatives to support left-of-center public policy implementation through its Member Action Center (MAC). The union has organized community action in support of a number of political initiatives, including the implementation of a high wealth tax to fund public education and the regulation of charter schools.[1] NYSUT also exercises influence in New York electoral politics, frequently supporting Democratic candidates for state and federal office through its political action committee, VOTE-COPE.[2] In 2020, NYSUT also sued the state of New York for withholding school funding during the COVID-19 pandemic. [3]

NYSUT is a federation of over 1200 local labor unions which include over 600,000 educational and health care workers in the state of New York.[5] NYSUT is affiliated with both the American Federation of Teachers (AFT) and the National Education Association (NEA), two of the largest labor unions in the United States.[6] NYSUT notably includes the United Federation of Teachers (UFT), the main New York City teachers union which includes over 140,000 teachers and other education employees.[7]

Aside from its affiliation with other education-specific unions, the NYSUT is affiliated with the left-of-center AFL-CIO.[8]

Aside from engaging in membership training and collective bargaining initiatives, NYSUT is heavily involved in political action. NYSUT has advocated for a number of left-of-center education policies, including high publicly funded pensions for teachers and increased taxes to fund public education.[9]

NYSUT maintains most of its political organizing through the Member Action Center (MAC), an online organizing community for its members to directly promote left-of-center policy goals. MAC runs a number of digital campaigns which call on its members to contact state legislators, email United States Senators and Representatives, and use social media to support public policy initiatives.[10]

NYSUT is a powerful political force in the state of New York, supporting a number of Democratic candidates for state and federal office.

NYSUT organizes VOTE-COPE, a political action committee that coordinates member contributions to support NYSUT’s endorsed candidates. During the 2020 election cycle, VOTE-COPE made over $8 million in expenditures, reporting its primary recipients as NYSUT ($5.6 million) and the AFT ($2.1 million).[13]

In June of 2020, VOTE-COPE made a $100,000 donation to Progress NYS, a Brooklyn political action committee, in support of New York State Assemblyman Harry Bronson (D-Rochester), an NYSUT-endorsed candidate.[14] VOTE-COPE was the sole funder of Progress NYS during the summer of 2020, which had just $60 in the bank at the time of the donation.[15]

Bronson’s primary election opponent, Alex Yudelson, argued that VOTE-COPE had used Progress NYS to skirt campaign finance regulations.[16] While VOTE-COPE donated twice to the Bronson campaign directly, its donations were legally limited to $4,700. Nonetheless, most of VOTE-COPE’s $100,000 gift to Progress NYS went to support Bronson’s campaign directly, sparking allegations that the gift was made in an attempt by VOTE-COPE to give more than the legal maximum to Bronson’s campaign.[17]

In September of 2020, NYSUT gave a $1 million donation to Progress NYS, which it then used to support NYSUT-endorsed candidates for the New York State Senate and Assembly.[18]

The voter guide encouraged its members to follow the AFT and NEA’s recommendations to vote for former Vice President Joe Biden (D) in the 2020 Presidential election. The recommendation included a number of Vice President Biden’s left-of-center policy proposals as reasons to support his candidacy, including increased public funding for higher education, mass student loan forgiveness, and support for increased unionization.[21]

NYSUT endorsed several Democratic candidates for various positions across the state of New York, whose policy proposals included publicly funded early childhood education, mass government funding to fight climate change, the implementation of wealth taxes, and increased public funding for postsecondary education.[22] Aside from endorsing specific candidates, the voter guide railed against charter schools and alleged that Republicans in Congress “have done nothing to support public education and access to healthcare.”[23]

In 2018, NYSUT declared that it would remain neutral in the New York gubernatorial election.[24] Nonetheless, during the election cycle, NYSUT gave hundreds of thousands of dollars to organizations that opposed New York Governor Andrew Cuomo (D), instead supporting far-left candidate Cynthia Nixon in the Democratic primary.[25] These included contributions to the Center for Popular Democracy (CPD) and New York Communities for Change (NYCC).[26]

In 2018, NYSUT also spent roughly $1.4 million in support of a bill that would reduce the use of student test scores to evaluate teacher performance in New York. The bill passed in 2019.[27]

When New York began to withhold payments to school districts over the summer of 2020, due to a fall in tax revenues during the COVID-19 pandemic, NYSUT immediately called on the state government to raise taxes on the wealthy in order to make up for the losses.[28] In September of 2020, NYSUT sued the state of New York in the Albany County Supreme Court for cutting $5.2 billion of funding originally intended for elementary and secondary schools.[29] NYSUT called the budget cuts “unconstitutional, illegal, and a violation of the separation and distribution of powers under the New York State Constitution.”[30]

The lawsuit came after Gov. Cuomo gave Robert Mujica, director of the New York Division of the Budget, the authority to withhold appropriated state funding due to budget imbalances caused by the COVID-19 pandemic.[31] In response to the lawsuit, the Division of the Budget claimed that the amount withheld was far less than the 20% of funding that had been alleged, coming in at around $2.5 billion instead.[32] [33]

When the COVID-19 pandemic first reached the United States, NYSUT called for mass shutdowns, arguing in early March of 2020 that schools should be closed in all counties with even a single case of COVID-19.[35] As the state struggled with layoffs and difficult financial forecasts due to hundreds of millions of dollars in lost tax revenue, NYSUT demanded increased pay for educators, the implementation of a wealth tax, and the prevention of any teacher layoffs.[36]

In May of 2020, Gov. Cuomo announced a partnership with the Bill and Melinda Gates Foundation to “reimagine” online education, including initiatives to share education between schools, provide educators with increased access to technology, and implement social distancing in the classroom.[37] NYSUT panned the proposal, criticizing the partnership for not directly involving teachers and instead demanding left-of-center education reforms, such as wealth taxes to increase school funding.[38]

In August of 2020, Gov. Cuomo announced that public schools would be allowed to reopen for in-person education after closing them in March during the COVID-19 pandemic.[39] NYSUT responded to the announcement by demanding a rule that schools shut down immediately for two weeks if any student or staff member contracted the virus.[40] NYSUT further demanded a statewide mask mandate for all public schools, rather than leaving it up to each district, and defended the ability of teachers to abstain from working due to health concerns.[41] [42]

In November of 2020, NYSUT launched an online website for teachers, community members, and other school employees to report COVID-19 safety concerns across the state of New York.[43] Through the site, individuals can submit safety complaints regarding cleaning, masks, ventilation, and district communications surrounding COVID-19 policies, which NYSUT then makes available for general viewing.[44]

Andrew Pallotta is president of NYSUT.[48] Prior to joining NYSUT, Pallotta worked as an elementary school teacher in New York. NYSUT has credited Pallotta with dramatically scaling up NYSUT’s left-of-center political activism work by founding the Member Action Center and collecting more in donations to VOTE-COPE than ever before.[49] Pallotta has also extensively encouraged union members to run for public office, developing a program to train candidates within the union.[50] Pallotta has additional ties to left-of-center labor organizing, working as vice president of the New York State AFL-CIO and as vice president of the AFT.[51] Pallotta also previously worked as a Bronx representative for the UFT.[52]

Jolene DiBrango works as executive vice president of NYSUT.[53] DiBrango is a long-time teacher and union organizer, working as president of the Pittsford District Teachers Association, a local labor union, before taking on a leadership role in NYSUT. DiBrango also works as a vice president and executive board member of the New York AFL-CIO and as an AFT vice president.[54] DiBrango has donated over $5,000 to VOTE-COPE over the four years from 2017 through 2020.[55]

NYSUT also reports 24 executive committee members and 67 “directors,” each of which received compensation between $5,000 and $20,000 from the NYSUT in 2017.[58] Most of these employees have extensive ties to left-of-center labor organizing, including Adam Urbanski, vice president of the AFT and the Teacher Union Reform Network (TURN); Barbara Bowen, AFT vice president and president of the Professional Staff Caucus (PSC); and Evelyn DeJesus, vice president of education for UFT.[59]