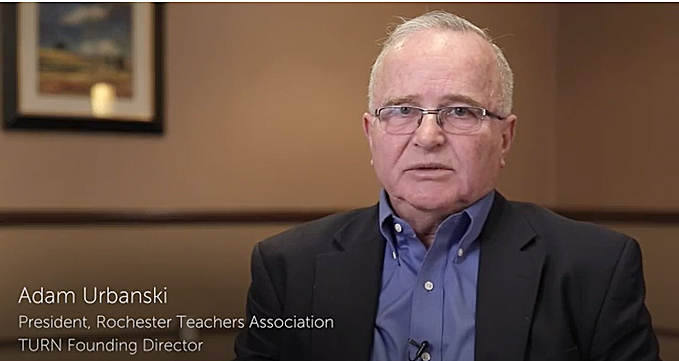 Adam Urbanski is the longtime president of the Rochester Teachers Association and vice president of the American Federation of Teachers. He is the director of the Teacher Union Reform Network (TURN), an organization of teachers’ unions and teachers’ union members who advance left-wing and union-friendly education reforms. He is a former social studies teacher and university professor.

He began working in the Rochester School District in 1969 as a teacher.[1]

Urbanski first gained national attention in 1987 when he signed a new contract with the city of Rochester that substantially increased teacher salaries in exchange for a five-day increase in the working school year. The union also conceded to ending the practice by which seniority determined where a teacher would be assigned and agreed that each teacher would become responsible for a group of students and provide counseling, home visits, and other services.[2] As early as 1991, however, the Rochester reforms were under threat, and Urbanski’s union rejected a new contract that included additional performance incentives.[3]

Criticism of Education Reform and Retirement

In more recent years, Urbanski has been critical of education reform ideas. In 2014, he wrote an op-ed opposing New York State’s proposed reforms to teacher tenure that would restrict the practice.[5] In 2015, he announced his opposition to other reforms proposed by New York Governor Andrew Cuomo (D) which would increase the use of standardized testing to assess teacher performance and allow an outside takeover of failing schools. Urbanski claimed that Cuomo’s reforms were part of a plot to dismantle public schools in the country.[6]

Later in 2015, the Rochester Democrat and Chronicle editorial board called for Urbanski’s resignation. The paper denounced Urbanski and his union for dominating the Rochester school board. It also blasted Urbanski for being a defender of the city’s failing public schools.[7]

In 2017, Urbanski repudiated his prior support for charter schools in an interview with In These Times, a pro-labor union publication. Instead, he said that traditional public schools could be “leaders of change.” AFT president Randi Weingarten also declared her support for Urbanski and TURN’s ideas in that interview.[8]

Urbanski has since retired from the Rochester School District but he remained president of the Rochester Teachers Association. He had not taught full time in 29 years; instead, he was paid to head the teachers’ union. He says being retired would help him negotiate a better contract for teachers.[9]

In 1995, Urbanski co-founded Teacher Union Reform Network (TURN), a labor union-backed group that seeks to engage local teachers’ unions in support of union-backed education reform. TURN had the backing of the national leadership of both the AFT and the National Education Association. In 1999, Urbanski even praised charter schools, while declaring his opposition to government-funded support for private school choice.[10] TURN is closely affiliated with the left-of-center education advocacy group Consortium for Educational Change, which has received substantial funding from the Gates Foundation, Ford Foundation, and Joyce Foundation.[11]