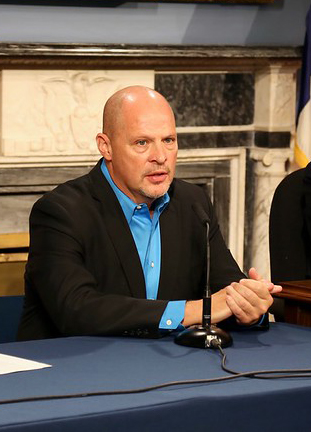 Mulgrew was born in Staten Island, New York. He attended Catholic schools until he went to the City University of New York College of Staten Island at which he earned a BA in English literature and an MA in special education. [1]

From 1993 to 2005, Mulgrew was a teacher of creative writing to at-risk students at William E. Grady High School in Brooklyn. [3]

From 1994 to 2004, Mulgrew served as William E. Grady High School’s chapter leader of the UFT. [4] In 2005, Mulgrew became the vice president of the union’s Career and Technical Education (CTE) High Schools. That year, Mulgrew joined Mayor Michael Bloomberg’s (then-R, later I and D) advisory committee for PlaNYC, the municipal government’s plan to incorporate one million more residents into New York City. In 2008, Mulgrew was appointed the UFT’s chief operating officer. [5]

In 2009, Mulgrew was appointed to finish the UFT presidential term of Randi Weingarten who had left to become president of the AFT. The following year, Mulgrew would be elected for a full term. At the time, the UFT claimed over 200,000 members, including teachers, guidance counselors, nurses, other school personnel, and retirees;[6] as of 2019, the UFT reported 120,000 active members. [7]

In 2008, while Mulgrew was COO of the UFT, Mayor Bloomberg cut 1.75 percent from the education budget and proposed making further expenditure reductions. In response, the UFT helped organize the ”Keep the Promises” coalition to oppose the proposal. [8] Mulgrew spearheaded the UFT’s role in the coalition[9] by organizing rallies and phone campaigns. [10] The government eventually restored $129 million to the education budget. [11]

Mulgrew has protected and expanded teacher benefits against opposition from New York City. In 2017, Mulgrew defeated an attempt to require teachers to pay for part of their health insurance premiums. The same year, Mulgrew gained paid parental leave for UFT employees. [13]

In 2010, Mulgrew and Mayor Bloomberg struck a deal to end the temporary reassignment centers (TRCs). Commonly known as “rubber rooms,” TRCs were offices where teachers undergoing disciplinary investigation were sent to do no work but continue to collect salaries. [15] Teachers would commonly attend TRCs for six to nine months before investigations and judgments concluded, resulting in de facto paid vacations. Critics alleged the investigations were dragged out by the UFT to accumulate benefits and protect its membership. Maintaining the facilities and paying salaries and benefits for “rubber room” teachers at the time cost taxpayers $30 million per year. [16]

Though the TRCs were closed, the Daily News reported that the Mulgrew continued the policy in all-but-name. Disciplinary investigation time frames did not shrink despite Mulgrew’s promise of an average of 60-to-90 days. While the number of arbitrators was initially increased from 20 to 39, it fell to 19 by the end of the year. In the year after the TRCs were officially closed, the costs of maintaining teachers under review fell by only $1 million to $29 million. [17]

However, in 2014, during a closed-door meeting with 3,400 union delegates, Mulgrew declared the UFT was “at war with the reformers” whose ideas would ostensibly “destroy education in our country.” Mulgrew also declared his support for the creation of 200 “experimental schools” which would be staffed by unionized labor, unlike most NYC charter schools. [19]

Mulgrew also admitted to having purposefully “gummed up” NYC’s teacher evaluation system by lobbying to expand the number of evaluation categories from eight to twenty-two, thereby increasing the complexity and ambiguity of individual evaluations. [20]

During the first few years as president, Mulgrew was considered a protector of the UFT’s “Absent Teacher Reserve” (ATR), an unofficial group of up to 1,000 teachers who are officially employed by the city but who do not work or temporarily work. Most ATR teachers come from school districts that have been closed due to bad performance or were removed from positions due to misconduct. ATR teachers tend to be veteran teachers at the top of the pay scale and are therefore considered by union critics to be UFT loyalists. [21]

In 2014, Mulgrew made a deal with Mayor Bill de Blasio (D) which introduced regulations to encourage ATR teachers to accept jobs at schools, which would supposedly reduce the numbers of teachers in the ATR. The contract was a surprise concession by Mulgrew to the city government as part of continued good relations between the city and the UFT. [22]

Mulgrew denounced Mayor de Blasio’s $827 million in education cuts declared in April 2020. The cuts were made in response to the COIVD-19 pandemic, which shut down in-person schooling, increased city expenditure, and dramatically decreased municipal tax revenue. Part of the cuts include a halt in hiring which will force the NYC to use teachers from the ATR and is projected to save the city $100 million. The 2020 education budget was previously set at close to $30 billion. [25]

In 2012, Andrew Ostrowsky, a New York City teacher, filed a lawsuit against Mulgrew, the UFT, and then-Mayor Mike Bloomberg (I, later D), alleging that the UFT covered up a sex scandal between Mulgrew and Emma Camancho-Mendez, a married guidance counselor, while the two worked at William E. Grady High School in 2005. Ostrowsky claimed that Mulgrew and the counselor were caught having sex on school property by a janitor who was then sworn to secrecy along with the school’s principal by then-UFT president Randi Weingarten. [26] According to a New York Post report, “UFT spokesman Dick Riley called the suit ‘a catalog of absurd, false charges,’ and the alleged misconduct was never addressed in court.” [27]

Soon after the incident, Mulgrew became the vice president of CTE schools for the UFT, and Camancho-Mendez was given a part-time job at Mulgrew’s union office paying $22,000 per year on top of her full-time teaching salary. Camancho-Mendez later moved into the full-time position of liaison for special education for the UFT. [28]