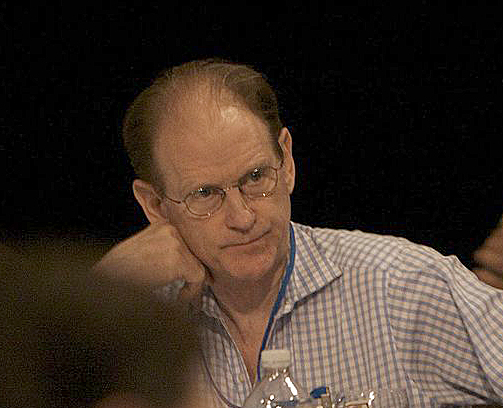 In the Clinton White House, Ickes became known as the “Garbage Man”[3] and described his role as ‘director of the sanitation department.’”[4] He was charged with running the damage control effort against the Whitewater probe and served as “point man” on the Clinton administration’s failed “Hillarycare” government-run health care initiative.[5]

Ickes is widely recognized as an original organizer of a network of left-of-center super PACs and nonprofit groups that take in unlimited contributions to support Democrats and liberal issues.[10] He was a founder of America Coming Together, a 527 political organization that raised over $200 million from liberal billionaires and organizations in support of Democratic presidential candidate John Kerry in 2004.[11]  He was also the first president of the Democratic-aligned Super PAC Priorities USA Action[12] and helped that organization support both President Barack Obama’s 2012 re-election[13] and former Secretary of State Hillary Clinton’s failed 2016 presidential candidacy. [14]

Ickes is a labor lawyer, and has previously represented at least one union reportedly tied to organized crime. He is also a lobbyist and has taken in over $13 million in lobbying fees from a variety of left-of-center clients and corporations.[15] New York City Mayor Bill de Blasio has called Ickes his closest mentor; since de Blasio’s election Ickes has been tied to a number of controversial city decisions that benefited Ickes’ clients.[16]

Harold M. Ickes was born on September 4, 1939, in Baltimore, Maryland, to Harold L. Ickes and Jane Dahlman. His father served as President Franklin D. Roosevelt’s Secretary of the Interior. The younger Ickes attended high school at the Sidwell Friends School in Washington, D.C.  Ickes reportedly graduated from high school functionally illiterate.[17] He would later graduate from Stanford University in 1964 with a degree in economics, and earned a law degree from Columbia Law School in 1967.[18]

In the late 1960s, Ickes became active in the anti-war movement and left-wing politics. After completing law school, he worked on the presidential campaigns of left-wing Democrats Eugene McCarthy in 1968 and George McGovern in 1972.[19] He also co-managed Basil Paterson’s 1970 Democratic primary campaign for Lt. Governor of New York.[20]

Outside electoral politics, Ickes served as a lawyer for labor unions.[22] From 1977 through 1993, Ickes represented labor unions for the New York law firm of Meyer, Suozzi, English & Klein, P.C. He rejoined the law firm in 1997 and is currently Chairman emeritus of the firm.[23] He is a co-chair of the firm’s Labor and Government Relations Departments.[24]

From 1983 to 1991, one of Mr. Ickes’s major clients was Local 100 of the Hotel and Restaurant Workers International. In 1992, Local 100 settled a civil racketeering lawsuit, which alleged that two New York-based Mafia families controlled the union. In the settlement, Local 100 President Anthony “Chickie” Amodeo resigned and the union was placed under federal trusteeship.[25] The managing partner of Meyer Suozzi said the firm stopped representing Local 100 in January 1992 and that the firm was not aware of any ties between Local 100 and organized crime.[26]

After Clinton’s election, Ickes held multiple positions in the White House from January 1994 through January 1997. He was Assistant to the President and later promoted to Deputy Chief of Staff under President Bill Clinton.[29]

In the Clinton White House, Ickes became known as the “Garbage Man.”[30] In a 1997 New York Times profile of Ickes, author Michael Lewis noted that “Ickes has been caught up in so many of Clinton’s scandals and crises that he came to describe his function in the White House as ‘director of the sanitation department.’”[31]

Ickes’s first major assignment in the White House was to run the damage control effort against the Whitewater probe, an investigation that eventually formed the basis for the successful prosecution of the Clintons’ Whitewater business partners, James and Susan McDougal, and Arkansas Gov. Jim Guy Tucker (D), for bank fraud.[32]

From late 1994 through the end of the 1996 Clinton re-election campaign, Ickes served as the chief fundraising strategist. By his own admission, Ickes was a central figure in virtually every aspect of the reelection effort.[34] During the campaign, Ickes pioneered the use of “soft money” to pay for thinly veiled issue advertisements to support President Clinton’s reelection effort.[35]

Ickes was fired three days after President Clinton’s 1996 presidential reelection, as his role in several questionable Clinton fundraising practices came to light. [36] Federal investigators placed him at the center of an alleged conspiracy to avoid campaign finance laws.[37]

Shortly thereafter, Ickes submitted thousands of documents to Senate investigators. CNN described Ickes’ documents as painting a picture of a White House consumed by fund-raising concerns and detailing numerous perks offered to potential donors.[38] One anonymous memo included in Ickes’ files said that in order to reach the Democrats’ aggressive $40 million fundraising goal, the White House should coordinate their activities to provide donors with perks such as seats on Air Force One, seats at private dinners with President Clinton, and “better coordination on appointments to boards and commissions.”[39] CNN’s report noted that the item tying Democratic fund-raising to presidential boards and commission appointments was potentially problematic because, “it is illegal to sell public offices to contributors.”[40] The New York Times wrote, “Right up to Election Day 1996, Ickes continued to offer access to the President in order to raise money for the Clinton campaign.” [41]

During the 1996 presidential campaign, Ickes was also alleged to have facilitated a position at the Democratic National Committee for a mid-level Commerce Department official turned fundraiser, John Huang.[42] As a fund-raiser for the Democratic National Committee in 1996, Huang raised $3.4 million for the party and its campaign, mostly from the Asian American community. The DNC subsequently returned nearly half of the money, determining that it was improperly raised or came from questionable donors, some of them from overseas.[43] In 1999, Huang pled guilty to a felony conspiracy charge for violating campaign finance laws.[44]

Ickes was tapped to plan Hillary Clinton’s first Senate campaign on the same day in 1998 that the Senate dismissed the articles of impeachment against Bill.[49] He served as the top advisor to her campaign, where — according to now-New York City Mayor and Hillary’s then-campaign manager Bill de Blasio — he was the one figure who ranged farthest across the campaign and insured that all the pieces came together.[50]

In 2008, Ickes served as a volunteer “adviser to the campaign manager” on Clinton’s presidential campaign.[51] He was most notably in charge of managing the campaign’s contentious fight for super-delegates at the 2008 Democratic National Convention.[52]

Harold Ickes is the founder and president emeritus of Catalist, LLC. After the Democrats lost the 2004 presidential election, the board of America Coming Together voted to create a Democratic Party voter databank outside the formal party apparatus and structured as a business, with investors and customers drawn from the same pool of those who had worked closely together in 2004. Ickes initially agreed to raise $5 million to create the company now known as Catalist, LLC,[53] formerly called Data Warehouse.[54]

Catalist raised over $11 million in venture capital, including more than $1 million from the billionaire liberal financier George Soros.[55] Meanwhile a select group of clients including the National Education Association (NEA), SEIU, and AFL-CIO have paid the firm $10,473,521 since 2007.[56]

In 2015, the conservative nonprofit Foundation for Accountability and Civic Trust filed a Federal Election Commission complaint against Catalist. The complaint alleged that the company, the Democratic National Committee, and more than 300 Democratic campaigns[57] had broken federal election law by providing Democratic campaigns with excessive and prohibited contributions through undisclosed in-kind contributions.[58] The FEC took no action on the complaint.

Ickes is widely recognized as an original organizer of a network of Democratic Party-aligned political action committees and nonprofit groups that can raise unlimited contributions and make unlimited election-related advocacy expenditures.[59]

During the 2004 presidential campaign, Democratic strategist Howard Wolfson told New York magazine that—outside of the campaign of Democratic nominee U.S. Senator John Kerry (D-Massachusetts)—Ickes was “the most important person in the Democratic Party.”[60]

In total, ACT and the Media Fund together raised $202 million during the 2004 election cycle, Nearly half which came from just five donors — liberal mega-donors George Soros and Peter Lewis, Hollywood producer Steve Bing, the SEIU, and the AFL-CIO.[63]

Subsequently, America Coming Together and Media Fund were found by the Federal Election Commission to have illegally spent $150 million on federal campaign activities without registering as political committees, and the two groups were fined a combined $1.35 million.[64]

Priorities USA and Ready for Hillary

In 2011, Harold Ickes was one of the first financial supporters of the Democrats new pro-Obama super PAC Priorities USA[65] and served as its first president.[66] By Election Day 2012, the super PAC had raised more than $66 million from unions and wealthy liberal donors,[67] and spent that money attacking Republican presidential candidate Mitt Romney with attack ads.[68]

In 2015, Ickes served on Priorities USA Action’s board of directors as the Super PAC re-branded itself in support of Hillary Clinton’s presidential candidacy.[69] Additionally, Ickes served as an informal adviser to the Ready for Hillary super PAC (later called Ready PAC).[70]

In 2008, while he was advising Hillary Clinton’s presidential campaign, Ickes said that his “bread and butter” was lobbying.[71]

Shortly after de Blasio’s 2013 election, Ickes re-opened the New York branch of his lobbying firm. Ickes had not lobbied in the city for nearly a decade, but quickly collected nearly $1 million in fees and secured multiple policy wins for his clients.[75]

In 2014, one of Ickes’ notable policy wins came at de Blasio’s urging, when the New York City Council passed a controversial bill paying $42 million in additional wages (on top of pay under its existing city contract) to public school bus drivers union. He union was represented by Ickes.[76]

In 2016, Ickes bundled and delivered over $12,000 in contributions to de Blasio’s campaign account. On the same day that the campaign accepted the donations, New York City’s Parks Department announced that A.E.G. Live — a concert promoter that paid Ickes $150,000 — had won permission to host a music festival on Randall’s Island, while two other companies had seen similar requests rejected.[77]

In 2011, the Center for Responsive Politics reported that Ickes, along with his wife, Laura, had donated more than $235,950 to federal candidates and committees since the 1990 election cycle. During the 2010 election cycle alone, Ickes and his wife donated $68,650.[78]

Ickes is married to Laura R. Handman, a lawyer. The couple has one daughter, Charlotte Jane.[79]