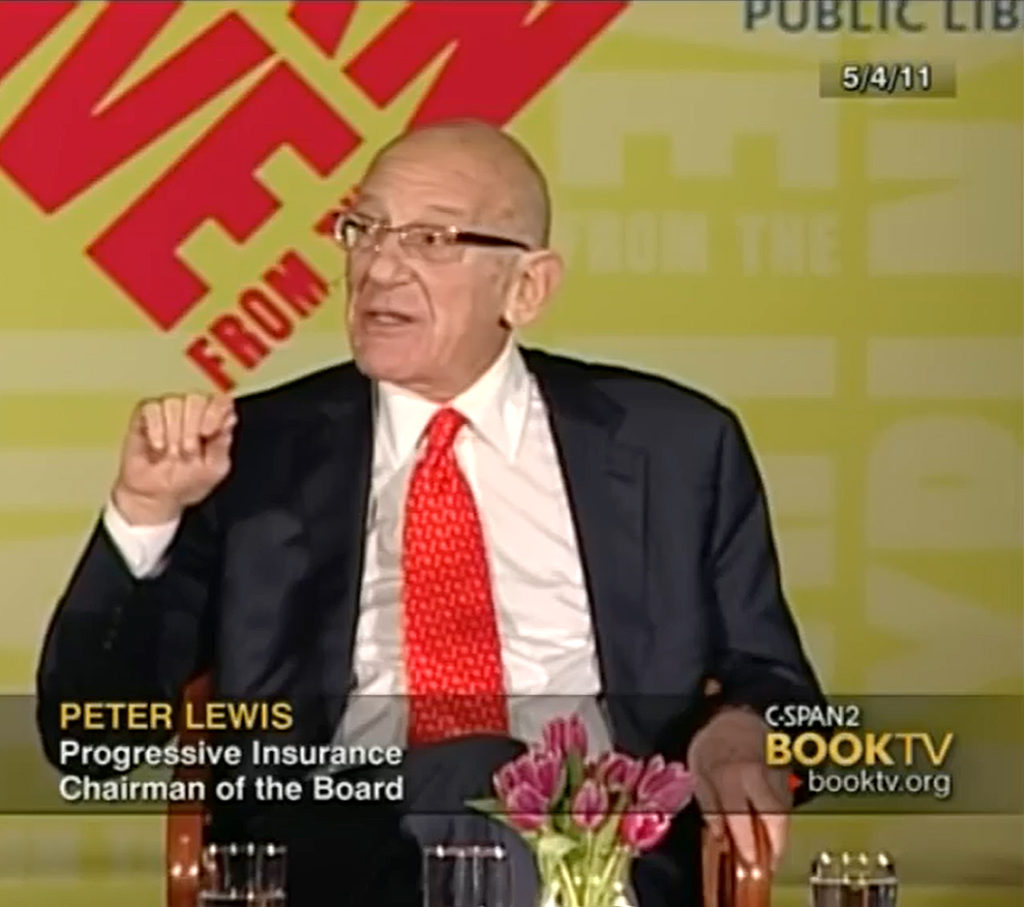 Peter B. Lewis was an American insurance industry executive and a major financial backer of left-of-center political and social causes. While he was best known for his career with Progressive Corporation, one of the largest automobile insurance firms in the United States, Lewis was also a patron of the architect Frank Gehry and a prolific philanthropist. One of the main causes which Lewis championed was the legalization of marijuana, with his political strategist and lawyer Graham Boyd crediting him with helping achieve legislative victories for the movement in Colorado and Washington. Lewis was also a prominent backer of former Senator John Kerry (D-MA) during his unsuccessful run in the presidential election of 2004. Throughout his life, Lewis donated hundreds of millions of dollars to various political and advocacy organizations and initiatives, including some of the leading think tanks and pressure groups on the political left. [1]

Lewis was a founding member of the Democracy Alliance, an influential and secretive group of donors who coordinate with activist organizations and Democratic Party leaders to direct hundreds of millions of dollars towards left-of-center causes. The group counts George Soros, the billionaire financier and dark money donor who runs the Open Society Network and its many grantmaking and activist arms, as one of its most prominent members. In February 2012, Politico reported that Lewis was considering distancing himself from the Democracy Alliance. Politico cited a source allegedly close to Lewis who said that he was displeased with the organization’s close ties to the Democratic establishment and its perceived drift from its more left-of-center founding ideals. [2] Lewis formally cut ties with the Democracy Alliance the following month, with a report from the Huffington Post suggesting a connection between the organization’s growing ties with institutions close to the Obama administration and Lewis’ decision to drop out. [3]

Lewis was a signatory to the Giving Pledge, a commitment by some of the wealthiest individuals in the United States and across the world to give away the majority of their wealth to charitable organizations and advocacy movements. The organization’s founding members include former Microsoft executive Bill Gates, his former wife Melinda French Gates, and billionaire investment manager Warren Buffet. In his pledge letter to the organization, Lewis emphasized his preference for “progressive” policy advocacy groups and indicated that he would be encouraging his children to continue in his footsteps. His son Adam J. Lewis, who inherited the family’s wealth and his father’s personal foundation, went on to donate more than $800,000 to Democratic political campaigns between 2004 and 2018 and provide substantial support to left-of-center environmentalist groups. [4] [5]

Peter Lewis died at age 80 in November 2013 at his home in Coconut Grove, Florida. He was buried in Cleveland, Ohio, the city where had spent most of his career with Progressive. The local news publication Cleveland described him as having been “known for his flamboyant, freewheeling lifestyle,” which included marijuana use and unusual marriage life. As reported by Cleveland.com, Lewis divorced his wife Toby Devan in 1981 after he “decided he no longer wanted to be monogamous.” However, Lewis maintained a relationship with his former spouse and hired her four years later to maintain the more than 6,000-piece art collection he owned through the Progressive Corporation. The collection included a set of posters by artist Andy Warhol featuring Chinese communist dictator Mao Zedong: according to Cleveland, Lewis was “proud” that the posters bothered some of his employees at Progressive, viewing the images as a way to “shock them … and to make them view the world through fresh eyes.” Lewis justified his support for the legalization of marijuana by claiming that those who used it were “not hurting somebody else” and asking “Who the hell cares? Kill yourself. God bless you.” Cleveland attributed Lewis’ lifestyle and activism to his “libertarian” worldview and his desire to advance “causes he viewed as progressive.” [6] Lewis also cited his Jewish heritage as one of his motivations for giving away approximately $500 million, which he claimed was “nearly half” of his net worth, to charitable and often politically liberal causes throughout his life. [7]

Peter Lewis donated approximately $500 million to a wide variety of charitable causes, including left-of-center advocacy as well as several artistic and architectural projects. Much of the grants came from his personal philanthropic organization, the Lewis Foundation. Lewis provided founding grants to some of the most influential left-of-center groups to emerge in the early 2000s, including: [8]

The Lewis Foundation has also been a consistent financial backer of the American Civil Liberties Union, one of the top left-of-center legal activist groups in the United States and a driving force for lawsuits and court decisions made to block laws passed by Republicans, including those enacted by the Trump administration. In the lead-up to the 2004 presidential election, the Lewis Foundation donated more than $23 million to groups supporting Democratic candidate John Kerry, who ultimately failed to unseat Republican incumbent George W. Bush. In addition to donations, Lewis served as a coordinator for other billionaires opposed to Bush’s re-election: according to a report by the New Yorker, he had been the organizer of a meeting at the Aspen Institute to discuss grantmaking strategies to sway the election. The New Yorker cited associates of Lewis who had described him as “a shadow figure in the 2004 campaign” and noted that he had declined all requests for interviews in the lead-up to the election. [9]

Lewis was a leading backer of groups opposing the re-election of President George W. Bush in 2004, including MoveOn Civic Action and America Coming Together. However, a report by the Washington Post that year suggested that Lewis had timed a major business deal to take advantage of a tax policy which the Bush administration had passed in 2003, even as he opposed Bush in public. According to the Post, Lewis had offered to sell nearly $100 million worth of his own shares in his Progressive Corporation, and that he would save close to $20 million in federal taxes due to the new policy. The Post cited tax expert Robert Willens, who claimed that “there’s no way in the world he would have sold in this transaction under the old tax rules.” The Post indicated that it did not receive a comment from Lewis regarding the possibility of him benefiting from the Bush tax policy while funding opposition to the Bush campaign. [10]