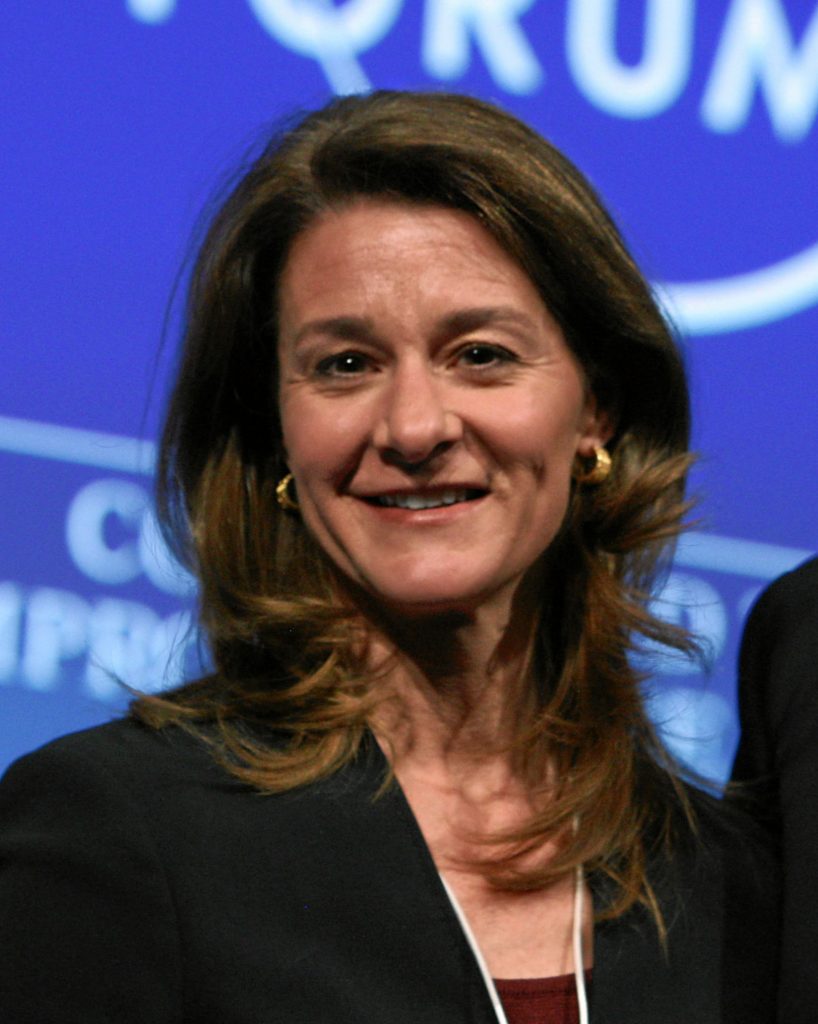 As an executive at the foundation, she has overseen numerous major initiatives related to education, health, global poverty, and access to digital information. One primary focus for the foundation is the prevention and treatment of diseases, including vaccine research and development. Another top priority for the foundation is making birth control more accessible for women in third-world countries. [2]

In 2021, Gates and her husband announced they were divorcing. [3] According to sources with close relationships to the Gates family, Bill Gates’ relationship with deceased financier and sex offender Jeffrey Epstein was part of the reason for the divorce. [4] Business publications such as Bloomberg also predicted that the Gates’ divorce would result in them adopting different philanthropic priorities. Melinda French Gates’ personal grantmaking organization, Pivotal Ventures, announced its renewed commitment to promoting left-of-center policies related to women’s issues. [5] Melinda and Bill Gates officially divorced in August 2021. [6]

Melinda Gates was born in 1964 in Dallas, Texas. She attended a private Catholic school, where she demonstrated an interest in math and computers. She went on to attend Duke University in Durham, North Carolina, where she received a bachelor’s degree in computer science and a master’s degree in business administration. In 1987, she got a job as a product manager for Microsoft. Shortly after joining the company, she met the company’s founder Bill Gates at a trade show. The two eventually started dating and were married in 1994. [8] That year, Gates and her husband, together with his father, started a charitable organization called the William H. Gates Foundation. [9]

Gates spent nine years at Microsoft, departing in 1996 to focus on philanthropic work. In 1999, she and her husband merged their foundation with two of their other projects, the Gates Library Foundation and the Gates Learning Foundation. The new organization was called the Bill and Melinda Gates Foundation. [10]

The Bill and Melinda Gates Foundation devotes significant resources to public health initiatives in third-world countries. Vaccination is one of the foundation’s main lines of effort. The foundation invests in almost every aspect of vaccination, from research and clinical trials to manufacturing, distribution, and data collection. [11] In a February 2011 interview with CNN, Bill Gates predicted “unbelievable progress” in developing and distributing vaccines over the next decade. According to Bill Gates, the impact of vaccination campaigns, which he said includes “reducing sickness” and “reducing the population growth … allows a society a change to take care of itself.” [12]

In June 2014, Gates announced that the Gates Foundation would no longer directly fund abortion services. In a statement, she discussed her “struggle with the issue” and her desire “not to engage on it publicly.” Gates argued that abortion should be viewed as a separate issue from contraception, women’s health, and what she called “the lifesaving consensus regarding basic family planning.” [13]

Pro-life advocacy groups have disputed the foundation’s claim that it does not fund abortion. Human Life International argued that some of the chemical contraception methods that the foundation promotes effectively function as early-stage abortifacients. [14] And in 2020, the right-of-center pro-life news site LifeNews reported that the foundation had given close to $68 million in grants to a nonprofit organization called DKT International, which distributes abortion drugs and devices. This included more than $4.9 million in 2019, five years after the foundation had announced that it would allegedly stop funding abortion. [15] According to LiveAction, another pro-life news source, the foundation gave the Planned Parenthood Federation of America, a leading abortion provider and promoter, a total of around $71 million in the years leading up to the 2014 announcement. [16]

Melinda Gates runs a website called Evoke, which hosts articles by female entrepreneurs, activists, and philanthropists. The site describes itself as a “community of optimists” who “start conversations, amplify new voices, and forge stronger bonds between change-makers.” Articles on the site promote increasing the number of women in various industries and social causes, as well as increasing the emphasis on women’s issues in left-of-center philanthropy and activism. [19]

In 2019, Gates released a book titled The Moment of Lift: How Empowering Women Changes the World. The book discussed left-of-center policies for advancing women’s issues around the world. [20]

In 2021, Melinda French Gates and her husband Bill announced that they would be ending their marriage. [21] According to the New York Times, numerous associates of the Gates family and the Gates foundation, Bill Gates’ relationship with billionaire financier and convicted sex criminal Jeffrey Epstein was a contributing factor to the couple’s divorce. In 2019, Bill Gates said that he had met Epstein, but denied having “any business relationships with him” and said that he neither attended Epstein’s private parties with women nor received money from him. A spokesperson issued a statement which acknowledged that “entertaining Epstein’s ideas related to philanthropy gave Epstein an undeserving platform,” which were “at odds with Gates’ personal values and the values of his foundation.” However, sources close to Gates claimed that he frequently met with Epstein. Melinda French Gates claimed not to be aware of the extent of her husband’s relationships with the convicted sex offender. [22]

According to the business publication Bloomberg, the Gates’ philanthropic priorities had started to diverge in the years leading up to their divorce. At a meeting with Biden administration officials, Melinda French Gates had emphasized issues such as paid family leave and child care. Around the same time, Bill Gates was promoting environmentalist causes and policies related to global food supply. Bloomberg reported that the couple’s divorce had accelerated this shift, and predicted that Melinda Gates would increasingly use her personal grantmaking organization, Pivotal Ventures, to pursue her own philanthropic and ideological objectives. [23] The Gates’ marriage officially ended in August 2021. In a previous a statement by the Bill & Melinda Gates Foundation, Melinda French Gates would resign as co-chair if “after two years either of the two concludes that they cannot work together as co-chairs.” [24]

Melinda and Bill Gates had three children: Jennifer Katharine Gates, Rory John Gates, and Phoebe Adele Gates. [25] The couple announced their intention to divorce in early 2021. [26] The divorce was finalized in August 2021. [27]