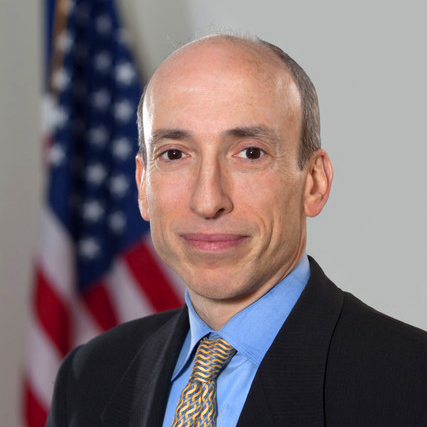 Gary Gensler is an investor, public official, and Democratic Party activist nominated to serve as Chairman of the Securities and Exchange Commission (SEC) by President Joe Biden. Gensler previously worked as an Undersecretary of the Treasury in the Clinton administration, where he worked on financial industry regulation. [1]

In 2009, then-President Barack Obama appointed Gensler to Chair of the Commodity Futures Trading Commission (CFTC) in the wake of the 2008 financial crisis. While there, Gensler greatly expanded the power of the agency and gained a reputation for being a staunch advocate in support of left-of-center financial regulations. Gensler led the agency to impose sweeping restrictions on the swaps market and worked to pass the Dodd-Frank Act, parts of which Gensler himself wrote. [2] [3]

Gensler has an extensive history within the Democratic Party, gaining a reputation as a “stealth fighter” for the party’s agenda. [6] Gensler has advised Democratic candidates at all levels, working as chief financial officer for former Secretary of State Hillary Clinton’s failed 2016 presidential campaign. Gensler gained a reputation for pushing U.S. Senator Elizabeth Warren (D-MA)’s far-left regulatory ideals throughout the Clinton campaign, causing other campaign staff members to question his loyalty. [7]

Gensler was raised in Baltimore where his father, Sam Gensler, worked as a cigarette and pinball machine vendor to local bars. Sam Gensler was known as “the unofficial chief lobbyist” for the industry, frequently bringing Gary Gensler to the Maryland state capitol during the legislative session to lobby for lower taxes and licensing fees. Gensler credits the trips with bringing him into politics. [8]

Gensler attended the Wharton School at the University of Pennsylvania, where he received his bachelor’s and his master’s degree in business administration. [9] After graduating from Wharton, Gensler went to work at Goldman Sachs, one of the largest investment banks in the world. Gensler first worked as a negotiator of mergers and acquisitions before working directly under Robert Rubin, who would later become U.S. Treasury Secretary in the Clinton administration, in bond and currency trading. [10]

At age 30, Gensler became a partner at Goldman Sachs, making him the youngest partner in firm history. [11] Gensler shot to fame after negotiating one of the largest deals in media history on behalf of the National Football League, capturing $3.6 billion from five television networks to broadcast football games between 1990 and 1994. [12]

Between 2001 and 2009, Gensler sat on the board of Strayer University, a for-profit college. For-profit universities have been consistently criticized by left-progressive officials for allegedly using predatory lending practices. [13] Gensler has worked periodically in public service and politics for the past several decades, in addition to teaching and doing research in economics and management at the Massachusetts Institute of Technology (MIT). [14]

Aside from his roles in various presidential administrations, Gensler chaired the Maryland Financial Consumer Protection Commission from 2017 to 2019. While on the Commission, Gensler advocated for stricter regulatory standards for investment advisors, brokers, and dealers. [16]

Working with Summers, Gensler helped to pass the Commodity Futures Modernization Act, which exempted credit-default swaps from regulation. Several left-of-center sources have claimed that the deregulation of credit-default swaps resulted in the 2008 financial crisis. Gensler has since expressed regret for his position and worked throughout the Obama administration to regulate derivative markets, embracing a left-of-center regulatory agenda. [18]

Former President Obama nominated Gensler to serve as Chairman of the Commodity Futures Trading Commission (CFTC) in 2009 in the midst of the economic recession. Left-progressive U.S. Senators Bernie Sanders (D-VT) and Maria Cantwell (D-WA) put a Senatorial “hold” on Gensler’s nomination, claiming that his Wall Street background and record in the Clinton administration indicated that he would not impose significant left-of-center financial regulations on the banking sector. [19] [20] Then-U.S. Senator Tom Harkin (D-IA) attacked Gensler for his role in deregulation under the Clinton administration, citing his 1999 testimony during which Gensler said he was “positively, unambiguously” opposed to increased derivative regulations at his confirmation hearing. [21]

Gensler became further known for his strict handling of the London interbank offered rate (LIBOR) financial scandal. Gensler called the LIBOR, which sets the interest rate that one bank may charge another and underpins most loans, the “absolute core of our global financial system.” Gensler led a massive, 4-year investigation into LIBOR during his time as Chair of the CFTC that resulted in several investment banking firms, including UBS and Barclays, paying hundreds of millions of dollars in fines for artificially reducing LIBOR rates. [25]

During his tenure, Gensler also imposed regulations that made the United States the first country in the world to require any business dealing with swaps to register with American regulatory agencies for additional oversight. [26] Gensler also strengthened the Volcker Rule, which aimed to bar banks from proprietary trading and prevent them from shifting operations overseas to evade regulations. Gensler wrote rules placing the burden of proof on banks to demonstrate that they were not involved in proprietary trading, including forcing banks to provide a regular analysis of their trading activities. [27]

While at the CFTC, Gensler was known as an aggressive manager who “routinely demanded” that staff members at the Commission work nights, weekends, and holidays. Staff also reported that Gensler was a micromanager who reviewed even the most minor CFTC activities, such as the sending of routine “no action” letters. [28]

In July of 2013, Gensler held to a strict deadline requiring commissioners to develop plans to extend the left-of-center regulations imposed by Dodd-Frank to overseas markets, despite protests from CFTC commissioners. One commissioner responded by claiming, “No one has ever accessed Gary Gensler of being reasonable,” while another reportedly used expletives in describing Gensler’s demands. Several commissioners criticized the move as acting too hastily and risking overseas markets unnecessarily, with Gensler refusing to compromise on the implementation of new global regulations. [29]

After President Joe Biden’s election in November 2020, Gensler began work on the Biden transition team, overseeing transition planning for oversight of the financial industry. [30] In January 2021, President Biden nominated Gensler to become Chairman of the SEC. On March 10, 2021, Gensler’s nomination moved out of the U.S. Senate Committee on Banking, Housing, and Urban Affairs with a 14-10 vote. Gensler’s final confirmation before the U.S. Senate is pending as of March 17, 2021. [31]

Critics noted that Democratic control of the Senate likely resulted in Gensler’s nomination. Prior to the Georgia runoff elections in January 2021, it had been reported that centrist Robert Jackson, Jr. would likely be the SEC nominee because his centrist record made him likely to receive confirmation in the Republican-controlled Senate. After Democrats took control of the Senate, observers speculated that the switch to Gensler signaled a more aggressive regulatory approach. [32] If confirmed, Gensler is expected to reverse right-of-center free market policies introduced during the Trump administration by former SEC Chair Jay Clayton that eased restrictions on public companies, brokers, funds, and banks. [33]

Aside from introducing sweeping new economic regulation, Gensler is expected to align the SEC with other left-of-center policy priorities if confirmed, including environmentalism. Gensler has previously expressed support for the SEC taking an active hand in environmental, social, and governance (ESG) issues, including mandating that companies disclose their involvement with issues related to climate change, their political spending, and their diversity metrics. [34]

During his confirmation hearing, Gensler endorsed a left-of-center economic agenda. Gensler claimed in the hearing that companies should be required to disclose their so-called “climate risks” to investors and encouraged diversity and other workforce disclosures. [35] Gensler further committed to considering new SEC regulations on forced arbitration clauses and new regulations on stock trading. [36] Gensler also expressed support for the regulation of some cryptocurrencies, though he excluded the potential for regulating Bitcoin by claiming that it does qualify as a security. [37] Nonetheless, Bitcoin dipped 2.9% after Gensler claimed that securing cryptocurrency markets from fraud and manipulation was a challenge for the SEC. [38]

Despite his support for left-of-center economic policy, Gensler has secured the endorsement of the U.S. Chamber of Commerce, the largest lobbying agency in the country which historically favored right-of-center candidates and policies. Other right-of-center officials have expressed doubt at Gensler’s ability to lead the SEC, with U.S. Senator Pat Toomey (R-PA) accusing Gensler of pushing the legal bounds of the CFTC’s authority during his time at its head and expressing concern that he may do the same thing at the SEC to “advance a liberal social agenda” if confirmed. [40]

Despite keeping a low political profile, Gensler has been called the “stealth fighter” for Democrats, frequently meeting with top party leadership and assisting in Democratic strategy. Gensler is known within the Democratic Party for his “ability to cut deals that advance the party’s agenda.” Between 1992 and 2002, Gensler gave over $55,000 to Democratic candidates. [41]

In the early 2000s, Gensler was essential to efforts by Democrats to impose sweeping economic regulations. Gensler worked as a strategy advisor for then-U.S. Senator Paul Sarbanes (D-MD) during his time as Chair of the Senate Banking Committee, working to pass sweeping regulations on large firms through the Sarbanes-Oxley law and then helping to monitor the law’s implementation. [42] Gensler himself drafted the first version of the Sarbanes-Oxley law. [43] Gensler also assisted former U.S. Senate Majority Leader Tom Daschle (D-SD) in crafting the Democratic Party’s approach to pensions. [44]

Gensler has also been heavily involved in Democratic campaigns. In the early 2000s, Gensler advised candidates in the national Democratic Party on how to promote left-of-center economic agendas. Gensler also advised Democratic campaigns for Congress. [45] Gensler himself contemplated a run for the United State House of Representatives and has not ruled out a run for elected office in the future. [46]

After Sen. Warren dropped out of the presidential race in 2016, Gensler joined Clinton’s 2016 presidential campaign as chief financial officer and became known as the “Elizabeth whisperer” for his role in facilitating Clinton’s relationship with Sen. Warren. Campaign officials even questioned Gensler’s allegiance to the Clinton campaign, given his frequent contact with Sen. Warren. [49]

During his time on the Clinton 2016 campaign, critics accused Gensler of hypocrisy. The campaign frequently used Gensler, given his reputation as a proponent of left-of-center financial regulations, to attack U.S. Senator Bernie Sanders (I-VT), then-Clinton’s strongest opponent for the nomination. Gensler received criticism for critiquing Sen. Sanders, who had been a vocal advocate for increased Wall Street regulations that Gensler himself had supported, while the Clinton campaign remained silent on the issue of financial regulations. [50]

Critics also accused the Clinton campaign of using Gensler to establish credibility and rebuff criticisms that Clinton was indebted to Wall Street, without having any real interest in financial regulation. [51] At the time, Clinton had deep connections to investment banks and other financial giants, with Goldman Sachs donating hundreds of thousands of dollars to the Clinton Foundation and Clinton herself giving speeches at Goldman Sachs, KKR, and the Carlyle Group. [52]

In 2002, Gensler published The Great Mutual Fund Trap, a book co-written with Gregory Baer which argued that everyday Americans should not attempt to profit from the stock market using individual stock purchases. The book argued that day trading is one of the “four dumbest ideas in human history” and claimed that “individual investors significantly underperform the market” due to a lack of intelligence in choosing stocks. The book encouraged investors to abandon the brokerage model, instead investing in index funds to move into passive investment. [53]

The book resurfaced and caused controversy in March 2021 following Gensler’s first confirmation hearing before the U.S. Senate Banking Committee. In January 2021, individual investors communicating through Reddit boosted the price of failing GameStop stock through the Robinhood stock trading app, creating market disruptions and prompting calls for regulation by the SEC. [54]

After Gensler’s hearing, critics of proposed regulations saw the book as indication that the SEC would take steps to regulate trading apps. [55] Notably, Gensler came after stock trading apps in his confirmation hearing before the Senate Banking Committee, claiming that they use “behavioral prompts” to convince users to make more transactions. Gensler expressed support for exploring regulations on trading apps, which have largely democratized the stock market. [56]