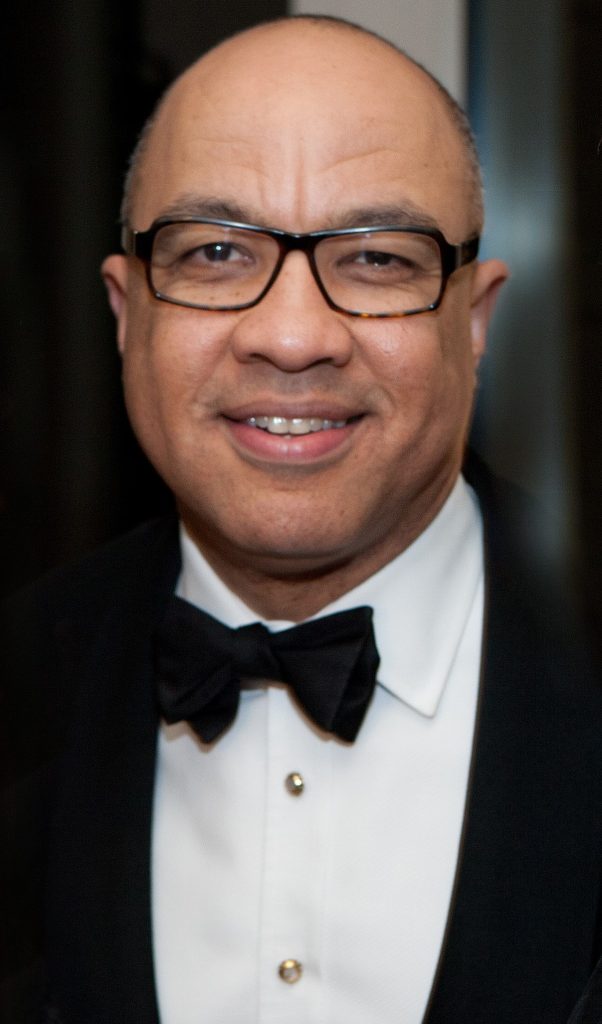 Since 2013 Darren Walker has been President of the Ford Foundation, one of the largest left-leaning granting foundations in the United States. [1] In 2015 he implemented a major re-structuring of Ford’s granting priorities designed to create what Walker characterized as a “social-justice infrastructure” that would develop “an entire generation of social-justice leaders around the world.” [2] [3] Some representative examples of the left-leaning policy advocacy organizations included in the Ford Foundation’s 2019 grants included the Center for Popular Democracy ($1 million), the Center for American Progress ($730,000), Allied Media Projects ($3.2 million), the New America Foundation ($2.5 million), the Center for Community Change ($5.3 million), the Economic Policy Institute ($2.7 million), the Alliance for Justice ($2.6 million), and the Alliance for Youth Organizing ($2 million). [4]

In a September 2019 interview with the New York Times titled “How Being a 13-Year-Old Busboy Prepared Darren Walker to Lead the Ford Foundation,” Walker stated that America was producing “the kind of capitalism that Adam Smith would be ashamed of.” Walker argued that, “we capitalists don’t like to talk about two things: redistribution and regulation. If our capitalism is to be successful, we’ve got to talk about those two things.” Walker also said, “This is going to sound snarky, but if you want the American dream, move to Canada, because Canada has a higher level of social mobility and economic mobility than we do in this country.” [5]

Walker’s total compensation as president and a trustee of the Ford Foundation was $1.1 million in 2018. [6] Beginning in 2016 and continuing at least until May 2020 he was also a board member at PepsiCo. [7] [8] In 2017, PepsiCo reported combined annual cash and stock compensation for non-employee directors would be increased to $290,000. [9]

Darren Walker is the President of the Ford Foundation, one of the largest left-aligned foundations in the United States. Walker is an active Twitter user (@DarrenWalker). He primarily uses Twitter to promote events, shows and media in which he is involved, to promote Ford Foundation initiatives and media coverage, and to offer general commentary on philanthropy. [10] [11]

In 2019, Walker put forward his vision of philanthropy in a book, “From Generosity to Justice: A New Gospel of Wealth,” published by the Ford Foundation. In it, Walker and other contributors argued that philanthropy is “a tool for achieving economic, social, and political justice,” and that justice requires “that all members of society recognize their privilege and position, address the root causes of social ills, and seek out and listen to those who live amid and experience injustice.” [13]

After graduation, Walker moved to New York City to work for the prestigious law firm of Cleary, Gottlieb, Steen and Hamilton. However, he found the long hours difficult. He resigned from the law firm and took a job with UBS selling mortgage-backed securities. These two roles, Walker said, helped him to understand markets, as well as project finance and client management. [14] [15]

In 1991, Walker saw a copy of The Economist magazine with a headline, “America’s Wasted Blacks.” This led to another career change. Walker left UBS, and for the next year he volunteered at an elementary school in Harlem: the Children’s Storefront School. [16]

His next major employment was as the chief operating officer of the Abyssinian Development Corporation, a non-profit development project of the Abyssinian Baptist Church of Harlem. Here he used his background in finance to develop community revitalization projects for Harlem, including the construction of a community school and homes for poor families. [17] [18]

Federal guidelines require private Foundations to distribute at least 5% of their assets annually through grants or charitable activities. [23] Ford Foundation distributions have exceeded this limit, ranging from 5.1% to 6.2% over the five-year period from 2013 to 2017. [24]

Darren Walker’s total compensation as president and a trustee of the Ford Foundation was $1.1 million in 2018. [25]

In March 2010, Walker was hired by the Ford Foundation as vice president of one of its three major program areas: Education, Creativity and Free Expression. In that role, Walker was given authority over more than $150 million in annual grants. Upon his hiring, a Ford Foundation statement said Walker would “lead the foundation’s work on school reform, next generation media regulation, development of new arts spaces, and sexual health and rights globally.” [26]

During his time as Vice President of Education, Creativity, and Free Expression, Walker oversaw 30 percent of the Ford Foundation’s grants. Among the projects he funded were Just Films, a fund for documentaries, as well as ArtPlace, a public-private collaboration for cultural development in rural parts of the United States. He also oversaw offices that oversaw grants for Africa and the Middle East. [27]

Among his early goals, Walker set about to repair the difficult relationship the Ford Foundation had long had with the Ford family (heirs of Ford Motor Company founder Henry Ford) and with the city of Detroit, both of which felt the Ford Foundation had left them behind. In 2014, as Detroit was undergoing a federal bankruptcy, the bankruptcy mediator appealed to a variety of Foundations to contribute hundreds of millions of dollars to rescue Detroit from bankruptcy. After months of negotiations, Walker agreed to a Ford Foundation donation of $125 million over 15 years as part of a “grand bargain” to save Detroit, arguing that, “We can’t give up on our cities.” [29]

Upon taking over as president of the Ford Foundation, Walker spent two years doing an organizational assessment. In 2015, he announced major strategic and operational changes with his “Ford Forward” plan. The plan reduced the areas in which the Ford Foundation was involved from 35 initiatives to only 15. The goal, Walker said, was “to do fewer things better, rather than more at less than our best.” The result was fewer, but larger, grants. The Ford Foundation also began contributing more to fund the operating budgets of organizations it funded, rather than just programmatic funding. Walker announced that Ford would wind down its funding for “conditional cash transfers in Latin America, microfinance, and, in the US, our initiatives extending the school day, building arts spaces, engaging religion in the public sphere, and more.” [30]

Most significantly, Walker announced Ford “would focus on combating inequality,” and “direct all of its money and influence to curbing financial, racial, gender, and other inequities. The objective of this change was to create what Walker called “social-justice infrastructure” in order to develop “an entire generation of social-justice leaders around the world.” [31] [32]

The Foundation works in seven areas. [33]

Within these seven areas, grant recipients must show how their work addresses inequality. For example, Walker said that Ford would continue to provide grants to help local communities control their natural resources, but grantees now “need to show they protect people who are disproportionately hurt by global warming.” The Ford Foundation will also continue supporting arts and culture, but “artists, filmmakers, and choreographers will need to focus on social justice and challenge “dominant narratives” that perpetuate inequality.” [34]

Some representative examples of the left-leaning policy advocacy organizations included in the Ford Foundation’s 2019 general grants priorities included the Center for Popular Democracy ($1 million), the Center for American Progress ($730,000), Allied Media Projects ($1.5 million), the New America Foundation ($2.5 million), Faith in Action ($855,000), the Institute for Policy Studies ($550,000) and Friends of the Earth ($220,000). [35]

In addition to the Ford Foundation’s general grant priorities noted above, Walker’s 2015 new philanthropy strategy also included the creation of a special $1 billion commitment over five years to the BUILD program. BUILD was promoted as a project to “strengthen select organizations and networks that are central to our overall strategy to reduce inequality.” [37] [38]This marked a major shift away from the wide net approach the Ford Foundation had previously taken, and towards a much more targeted development of “strategic partner” relationships with a select group of grantees who would “work together to influence broader networks and fields…”[39]

Walker also serves on the Boards of Director of PepsiCo, Carnegie Hall, the Committee to Protect Journalists, the National Gallery of Art, the High Line, the Smithsonian’s National Museum of African American History and Culture, Art Bridges, the HOW Institute for Society, VOW to End Child Marriage, and the Global Steering Group for Impact Investment. [43]

In 2016, Walker joined the Board of Directors of Pepsico. [44] This created controversy because of Ford’s professed major goal of mitigating poverty, the link between obesity and poverty in the United States, and how these factors could potentially conflict with PepsiCo’s business model of selling sugary products while lobbying against regulatory proposals being promoted as remedies for obesity. [45] [46]

A New York Times report, “An Activist for the Poor Joins Pepsi’s Board. Is That Ethical?,” pointed out Pepsi’s “history of questionable behavior” and questioned whether Walker was being used to soften Pepsi’s reputation. One former Ford Foundation Board member, Michael Edwards, said to the Times, “I don’t know why he’d do this … There’s a risk that he will be viewed as inconsistent.” Professor Michael Seigel of Boston University said that “saying they want these problems solved, while at the same time lobbying against public health legislation that would help solve these problems” was “exactly the same thing the tobacco companies did.” [47]

Also, soon after Walker joined the PepsiCo board, the Chronicle of Philanthropy published an article by former Ford Foundation board member Michael Edwards titled “Foundation CEOs Shouldn’t Serve on Corporate Boards.” Edwards argued Walker was “exploiting an opportunity that isn’t available to 99 percent of his colleagues, one that could earn him millions of dollars over the coming years,” and that this was inconsistent with Walker’s message “that we should do everything we can to make our world more equitable.” [48]

As of May 2020, Walker was still on the PepsiCo Board of Directors. [49] In 2017, PepsiCo reported combined annual cash and stock compensation for non-employee directors would be increased to $290,000. [50]

In 2019, Walker wrote an article, “In Defense of Nuance,” supporting the plan by the Independent Commission on New York City Criminal Justice and Incarceration Reform (a commission on which Walker served) to close the Rikers Island prison and replace it with “smaller, replacement jails.” [51] In response, prison abolition activists, including over 100 Ford Foundation Fellows, wrote an open letter to the Ford Foundation condemning Walker’s “characterization of organizations, activists, and advocates fighting for prison abolition as ‘extremists’ and ‘ideological purists.’”[52]

This was followed by a protest at the Ford Foundation headquarters, featuring demonstrators chanting “Darren Walker, we won’t let you sabotage abolition with reformist camouflage.” [53]

Walker has expressed support for capitalism, saying that his “belief in our capitalist democracy is unwavering.” However, due to inequality, Walker believes that America has “the kind of capitalism that Adam Smith would be ashamed of.” Walker argued that, “we capitalists don’t like to talk about two things: redistribution and regulation. If our capitalism is to be successful, we’ve got to talk about those two things.” Walker also said, “This is going to sound snarky, but if you want the American dream, move to Canada, because Canada has a higher level of social mobility and economic mobility than we do in this country.” [54]

Walker has also argued that “ Philanthropy wouldn’t exist without capitalism. You can’t decouple philanthropy from capitalism.” [55]

Compared to the multi-billion-dollar philanthropic empire he oversees, Walker has a very modest history of campaign donations, but strongly leans toward Democrats. He donated a cumulative $750 to the 2008 and 2012 presidential campaigns of Barack Obama, and $500 to the 2008 presidential campaign of Hillary Clinton. Walker also made donations to a variety of Democratic Congressional candidates, including Clyde Williams, Sean Patrick Maloney, Kendrick Meek, and Ron Kirk. His sole donation to a Republican candidate appears to have occurred in 1991 when Walker donated $1,000 to Texas Republican Dan Branch. [56]