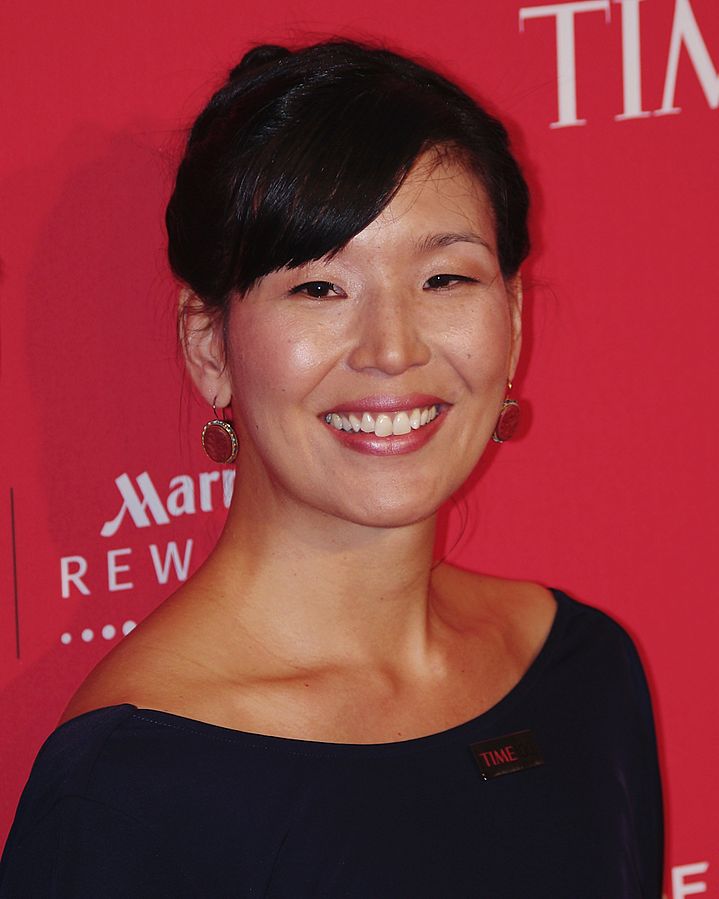 Ai-jen Poo is a left-of-center labor organizer and executive director of the National Domestic Workers Alliance (NDWA). Poo is closely aligned with a range of left-of-center foundations and organizing groups, sitting on the advisory boards of MoveOn.org, MomsRising, and the National Committee for Responsive Philanthropy. [1]

Poo co-founded the NDWA in 2007 to push for a range of left-of-center domestic-worker regulations, including a charter of federal regulations on home care billed the “National Domestic Workers Bill of Rights.” [2] As a project of NDWA, Poo launched the left-wing Caring Across Generations campaign in 2011 to advocate for Poo’s proposed platform of “Universal Family Care.” [3] The plan aims to create a federal “social insurance fund,” similar to Social Security, to pay for child care, family leave, elder care, and disabilities services. [4]

In 2019, Poo joined Cecile Richards, former president of Planned Parenthood, and Alicia Garza, the radical-left aligned founder of Black Lives Matter, to form Supermajority, an organization aiming to “train and mobilize two million women to become organizers, activists and leaders” ahead of the 2020 election. [5] Supermajority campaigns for left-of-center issues among women, then trains them in organizing tactics. It is supported primarily by former organizers of Hillary Clinton’s 2016 unsuccessful presidential campaign. [6] [7]

Poo has espoused radical feminism, claiming in a 2011 interview with Yes!: “I always knew that if we could just see the world through the eyes of women, we’d have a much clearer picture of both what the problems are and what the solutions are.” [8]

Poo was born in the United States to immigrant parents from Taiwan and spent part of her life living in Taiwan with her grandmothers. [9] Poo considers her childhood formative to his later work, being cared for mostly by immigrants and students as her mother spent time pursuing graduate education programs. [10] Poo’s father, a scientist who had been a pro-democracy activist in Taiwan, further inspired Poo to pursue a career in left-progressive political organizing. [11]

Poo attended Columbia University, where she was involved in a range of left-of-center activist projects, including getting arrested in 1995 for blocking the Manhattan Bridge to protest education budget cuts and organizing a strike at the university to establish an “ethnic studies” department. [12] Poo eventually focused in on labor organizing by volunteering with CAAV, a left-of-center labor organizing group serving the Asian community. [13] Her work evolved to focus specifically on Filipina domestic workers, eventually starting a group specifically for workers in New York to try to negotiate for stricter labor regulations. [14]

In 2000, Poo co-founded Domestic Workers United (DWU), a left-of-center organizing organization based in New York aimed to expand regulations on household work. [15] [16] Poo organized domestic workers whom she recruited from playgrounds around New York City, eventually securing passage of a city law that required nanny agencies to inform domestic workers of their rights in 2003. [17]

Poo then refocused DWU to target the state of New York as a whole, organizing a meeting of more than 200 domestic workers in 2003 to develop a left-of-center policy agenda that eventually became the “Domestic Workers’ Bill of Rights.” [18] Poo led efforts to get the legislation passed for six years, organizing buses from New York City to Albany at least once a month when the legislature was in session to pressure legislators to adopt the proposal. [19]

During her time with the DWU, Poo led the effort to create a national organization to organize household employees, bringing together 50 organizers from six different cities in 2007 to form the National Domestic Workers Alliance (NDWA), of which Poo has served as executive director since 2010. [20] As of 2020, the NDWA has grown to include over 60 affiliate organizations, in addition to a new national membership association. [21] NDWA provides strategy and organizing trainings for domestic workers and workers in “gig” jobs, including rideshare service and food delivery workers. [22] The group also pushes for a range of left-of-center houshold work reforms, including a “National Domestic Workers Bill of Rights” to institute federal regulations on home care sponsored by U.S. Senator Kamala Harris (D-CA). [23]

In discussing the NDWA’s work, Poo compared domestic work to the “transformation that took place during the Industrial Revolution,” arguing that domestic workers form labor union-like organizations to  demand increased labor regulations. [24] In an interview with the New York Times Magazine, Poo further claimed that American labor laws are “steeped in this history of exclusion, sexism, and racism” dating back to Jim Crow segregation. [25]

To expand the reach of NDWA, Poo enlisted the help of Alicia Garza, one of the founders of the Black Lives Matter Global Network, to coordinate strategy across the United States. [26] In leading the NDWA, Poo has pushed seven states in addition to New York to adopt left-of-center labor policies by organizing domestic workers. [27] Poo has also spearheaded partnerships with a variety of left-of-center individuals and organizations in order to put “low-wage women of color” at “the forefront of political leadership,” including Clinton campaign official Jess Morales Rocketto and the AFL-CIO labor union federation. [28]

In 2011, as a project of NDWA in partnership with left-wing organizing coalition Jobs With Justice (JWJ), Poo launched the “Caring Across Generations” campaign. [30] The campaign is centered around organizing for a program of “Universal Family Care” designed by Poo. [31] According to Poo, the federal government must institute a “social insurance fund,” similar to Social Security, to pay for child care, family leave, elder care, and disabilities services. [32] Caring Across Generations argues that all people are family caregivers who should obtain federal and state welfare benefits in order to take care of family members throughout their lives. [33] The campaign also calls on supporters to contact representatives to co-sponsor the FAMILY Act, a bill which aims to guarantee paid family and medical leave through a national paid leave program. [34] [35]

Poo in her capacity as co-director of Caring Across Generations has made it a priority to dispel “stereotypes” around care through a caregiving awareness campaign, #WeKnowYouCare. [36] The campaign aimed to reveal that 40 percent of caregivers are men, which Poo claiming that the campaign was necessary to avoid associating women with caregiving. [37] In an interview with Bustle centered around the campaign, Poo argued that “gendered perceptions”  of care make it more difficult to caregivers to provide care and contribute to the perception of care work as “less than real work.” [38] Poo further claimed that in the United States, people “don’t even think of [domestic work] as real work…a lot of that has to do with its association with women.” [39]

In 2019, Caring Across Generations conducted a poll with the Women’s Alzheimer’s Movement which claimed that the United States insufficiently supports domestic workers, with Poo calling the lack of publicly funded domestic work programs a “caregiving epidemic.” [40] In a 2020 interview with Maria Shriver, Poo claimed that the United States has a “culture of invisible caregiving” in which “our nation’s caregivers are emotionally burning out at a cost to their own health.” [41] In addition to demanding government funding for household work, Poo further argued for increasing the wages of domestic workers. [42] In a 2014 opinion piece published in The Guardian, Poo supported the controversial Service Employees International Union-backed Fight for $15 campaign, which called on the nationwide implementation of a $15 minimum wage that included domestic workers. [43]

Aside from arguing that domestic work is undervalued, Poo has claimed that it is the “future of work” which will account for the “single largest occupation” in the United States by 2030. [44] Poo further expanded on this idea in her 2015 book The Age of Dignity: Preparing for the Elder Boom in a Changing America, in which Poo argues that all American caregiving systems are “based on standards and demographics from another era.” [45]

In 2019, Poo joined forces with Cecile Richards, former president of Planned Parenthood, and Alicia Garza, one of the openly Marxist credited founders of Black Lives Matter,[46] to form Supermajority, an organization aiming to “train and mobilize two million women to become organizers, activists, and leaders” ahead of the 2020 election. [47] Supermajority intends to “educate” women on a range of left-of-center issues, including the supposed gender wage gap and publicly funding child care, then train them in organizing tactics. [48]

The group is closely aligned with Pantsuit Nation, a group started explicitly to support former Secretary of State Hillary Clinton’s bid for the presidency in 2016. [49] When asked about why she started the group, Poo complained that issues like voting eligibility and access, gun control, and government-mandated family leave are associated with women and treated as “soft issues,” claiming that “it’s time for women to run things.” [50] Poo has not been quiet about her radical feminism in the past, claiming in a 2011 interview with Yes!, “I always knew that if we could just see the world through the eyes of women, we’d have a much clearer picture of both what the problems are and what the solutions are.” [51] Poo has further claimed in the launch of Supermajority that, “Women have always done the work, the invisible work that makes everything else possible.” [52]

When asked in an interview with the New York Times what sets Supermajority apart from other leftist women’s groups, including the controversial Women’s March and Planned Parenthood Action Fund, Poo said that Supermajority’s aim was to “add oxygen” to other left-of-center groups, rather than compete with them. [53][54] [55] In a May 2019 interview with Teen Vogue, Poo called Supermajority “a new home for women’s activism” that aims to build “a New Deal for women.” [56]

Aside from organizing various labor union-aligned movements, Poo is deeply intertwined with the left-of-center nonprofit network. Poo has received a range of accolades from various left-of-center organizations, including a 2014 “Genius Grant” from the MacArthur Foundation. [57] Poo was also awarded the Open Society Institute NYC Community Fellowship in 2000 by one of George Soros’s core network foundations, and the Woman of Vision Award from the Ms. Foundation for Women. [58] The Ford Foundation granted Poo the Leadership for a Changing World Award in the early 2000s, and TIME placed Poo on its list of the 100 Most Influential People in the World in 2012. [59]

Poo serves as a trustee and board member at several high-profile, left-of-center organizations. Poo is a trustee at the Ford Foundation and MoveOn.org, a digital organizing platform. [60] In the labor organizing community, Poo has sat on the Labor Advisory Board at the Cornell ILR School, National Jobs with Justice, and AFL-CIO-affiliate Working America. [61] Outside of the labor movement, Poo advises a range of left-of-center advocacy groups, including MomsRising, the National Committee for Responsive Philanthropy, and Social Justice Leadership. [62]