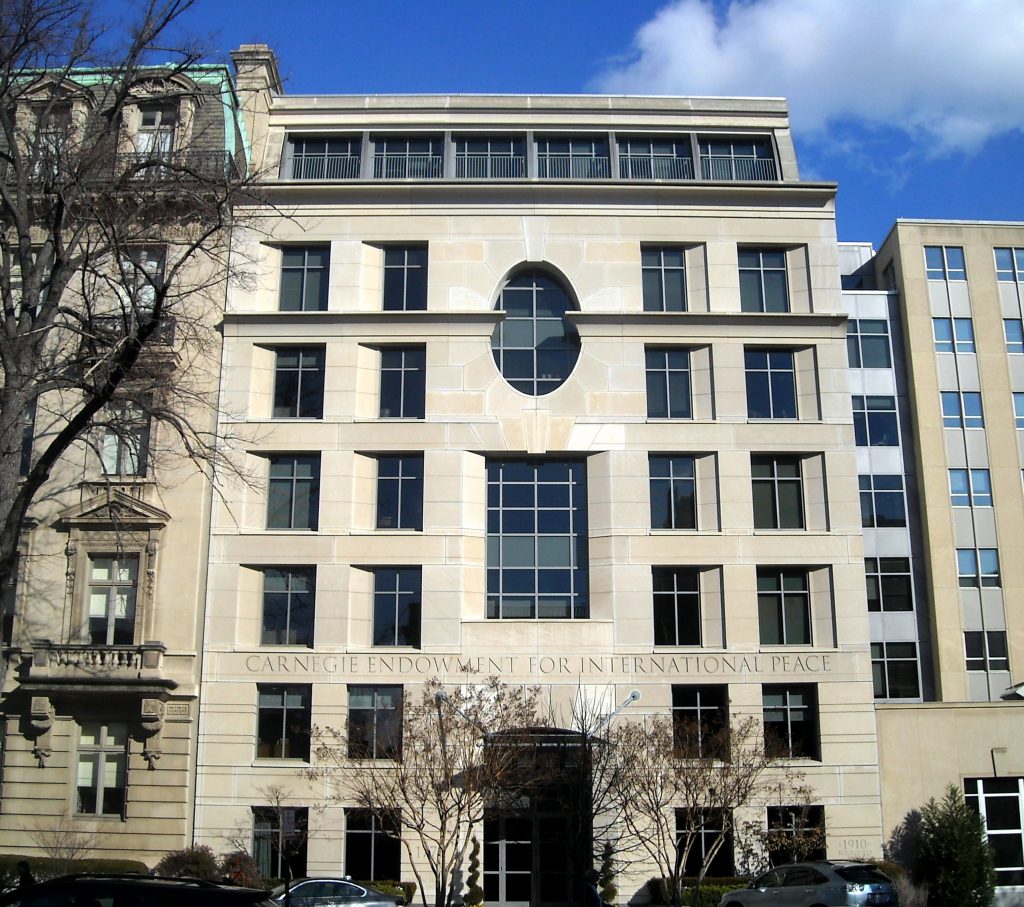 The Carnegie Endowment for International Peace is a foreign policy think tank founded in 1910 by Andrew Carnegie. It notes that it has a network of more than 150 “experts” who have “served in nearly every administration since the endowment’s founding.” [1]

Carnegie Endowment for International Peace (CEIP) is a foreign policy think tank founded in 1910 by Andrew Carnegie, then one of the richest people in the world after he sold Carnegie Steel to J.P. Morgan. Carnegie gifted $10 million towards the creation of the think tank, which now has centers in Washington D.C., Moscow, Beirut, Beijing, Brussels, and New Delhi. [3]

CEIP notes that it has a network of more than 150 foreign policy “experts” who have “served in nearly every administration since the endowment’s founding.” The organization has had multiple prominent members of its board of trustees, including former President Dwight Eisenhower, former secretaries of state Elihu Root and John Foster Dulles, former U.S. Sen. Bill Bradley (D-NJ), Director General of the World Trade Organization Ngozi Okonjo-Iweala, and former World Bank president and U.S. Trade Representative Robert Zoellick. Former Obama administration Secretary of Commerce Penny Pritzker is the chair of CEIP’s board of trustees as of July 2022. [4]

Former Carnegie president James T. Shotwell headed a delegation of advisors to the 1945 conference that drafted the United Nations charter. The delegation succeeded in adding an amendment to the UN charter that created the UN Commission on Human Rights. [5]

Carnegie Endowment for International Peace had a total revenue of approximately $51 million in 2019, $23 million of which came in the form of contributions and grants and $21 million through the sale of assets. The organization’s total expenses amounted to just under $40 million, $3 million of which was used to pay for “executive compensation,” and just under $14 million was used to pay salaries and wages. [6]

CEIP’s revenue slightly increased in 2020 with a total of $57 million, just under $41 million of which came from contributions and grants, and $12 million from the sale of assets. Its total functional expenses amounted to $38 million with just under $14 million being spent on salaries and wages, and another $3 million on executive compensation. [7]

Carnegie Endowment for International Peace receives most of its revenue in the form of contributions and grants from private grantmaking foundations including the Bill and Melinda Gates Foundation, Rockefeller Brothers Fund, and the Ford Foundation. [9] [10] [11]

Carnegie Corporation of New York, founded as an unrestricted grant making organization by Andrew Carnegie in 1911, has contributed approximately $45 million to CEIP since 2005. [12]

The John D. and Catherine T. MacArthur Foundation (also known as the MacArthur Foundation) has granted CEIP a total of $24,088,802 via 42 grants between 1988 and 2022. These grants mostly focused on programs about “nuclear challenges” and human rights. [13]

The William and Flora Hewlett Foundation (also known as the Hewlett Foundation) is a private foundation established in 1966 by Hewlett-Packard co-founder William R. Hewlett, his wife Flora, and his son Walter. The Hewlett Foundation has granted approximately $24 million to the Carnegie Endowment for International Peace since 2001. Its largest single grant was for $10 million in 2006 to enhance CEIP’s New Vision Initiative. [14] [15]

The Ford Foundation was, for much of its history, the largest foundation in the United States. It has been a major force in American culture and, because of its size, has given a great deal of money to left-wing and center-left organizations since its founding. The foundation has granted the Carnegie Endowment for International Peace a total of $4,750,000 across 13 grants made between 2006 and 2020. [16]

The Andrew W. Mellon Foundation (also known as the Mellon Foundation) is a private grant making foundation headquartered in New York City named for famed industrialist and Secretary of the Treasury Andrew Mellon. The foundation has granted CEIP a total of $840,000 across three grants between 1995 and 2002. The grants focused on projects relating to immigration policies. [17]

The Alfred P. Sloan Foundation, an American philanthropic family foundation founded in 1934 by former president and CEO of General Motors Alfred P. Sloan, has granted the Carnegie Endowment for International Peace a total of $1,317,797 across eight grants between 2009 and 2015. [18] [19]

The Rockefeller Brothers Fund was created in 1940 as the charity for the five sons of John D. Rockefeller, Jr.:  John D., III; future U.S. Vice President Nelson; Laurance; Winthrop; and David Rockefeller. The fund has granted CEIP a total of $1,315,000 across eight grants between 2017 and 2021. Most of the grants provided focused on CEIP’s Middle East initiatives including “peacebuilding” projects between the United States and Iran. [20]

The Open Society Foundations (OSF; formerly Open Society Institute) is a private grant making foundation created and funded by billionaire financier and liberal philanthropist George Soros. OSF gave CEIP a total of $6,593,175 across 19 grants between 2016 and 2020. [21]

Good Ventures, a nonprofit organization created by Facebook co-founder Dustin Moskovitz that closed near the end of 2018, gave CEIP a grant of $100,000 in 2015 to support the organization’s “work in India and China.” [24]

Democracy Fund, a public policy-oriented foundation chaired and principally funded by eBay founder and former chairman Pierre Omidyar, lists CEIP as a grantee on its website but does not disclose the amount granted. According to its website, the Democracy Fund created the grant to support “research development through the Democracy, Conflict, and Governance Program at the Carnegie Endowment for International Peace,” which would allow the program’s “expert” to create a research paper on “transitional justice lessons from abroad for advancing racial reconciliation in the United States.” [25] [26]

CEIP also lists donors on its website through its annual reports. Donors listed in the organization’s 2020 annual report include the Robert and Ardis James Foundation, Facebook Inc., the United Kingdom’s Department for International Development, Norway’s Ministry of Foreign Affairs, the Pew Charitable Trusts, and the Bank of America Charitable Foundation. [27]

Mariano-Florentino Cuellar, the president of the Carnegie Endowment for International Peace as of July 2022, is a former justice of the California Supreme Court and held his position from January 2015 until October 2021 when he became the president of CEIP. Cuellar is also the board chair of the William and Flora Hewlett Foundation as of July 2022 and is a member of the Harvard Foundation, the Council of the American Law Institute, and the American Academy of Arts and Sciences Commission on Accelerating Climate Action. [28] [29]