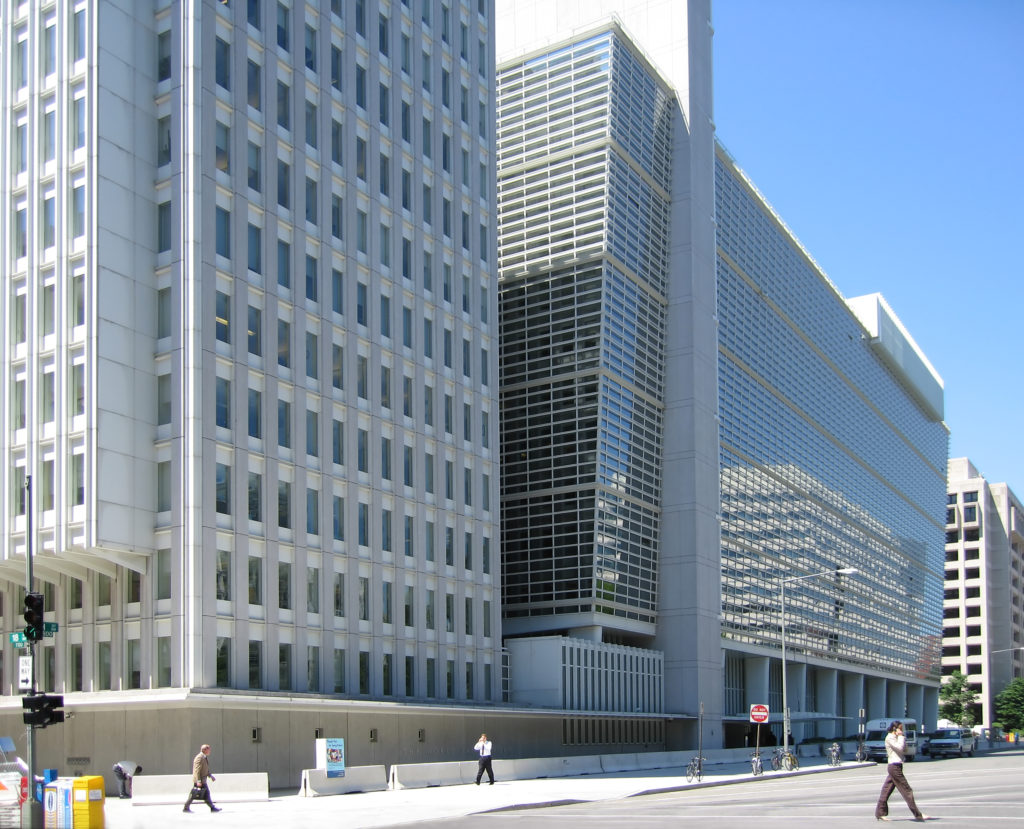 The World Bank has come under fire for allegedly aiding in corruption and human rights abuses in recipient countries. The World Bank provided $600 million in funding the “transmigration” of millions of Indonesians from the island of Java to other Indonesian islands. While the Bank asserted the resettlements were voluntary, critics alleged the migrations were related to the Indonesian government supporting “Javanization” of outlying parts of the country. [2] The World Bank has also been accused of bolstering government inefficiency and preventing private sector development in recipient countries. [3]

The IBRD was established along with the International Monetary Fund (IMF) in 1944 at the Bretton Woods Conference in New Hampshire. Its original mission was to fund Europe’s postwar reconstruction, but the fund later shifted its focus to developing nations after Europe began to receive financial aid chiefly through the American-led Marshall Plan. [5] In 1960, fifteen countries established the IDA in order to provide loans specifically to low-income developing nations. In contrast to the IDA, the IBRD makes loans to mostly middle-income countries. [6]

World Bank loans are often accompanied by structural adjustment programs that demand policy changes from the recipient nation. Recipients remain eligible to borrow from the World Bank until it determines that the nation “has reached a level of institutional development and capital-market access that enables it to sustain its own development.” [7][8] As of July 2020, just 37 recipient countries have been deemed able to sustain their own development by the World Bank and “graduated” the IDA without having subsequently receded back into eligibility. [9]

The World Bank has long faced criticism for alleged corruption and inefficiency. Economist Dambisa Moyo has argued that international aid agencies like the World Bank incentivize government corruption in developing countries. [10] By Moyo’s estimates, at least 25% of World Bank aid funds were misused by recipients at one point in its history. [11] Moyo has also claimed that aid undermines local small businesses that could have produced the goods that are being donated by the World Bank, which furthers the recipient state’s dependence on aid, rather than promoting long-term economic independence. [12]

Other right-of-center figures have made similar claims. In 1995, Cato Institute senior fellow Doug Bandow argued that inefficient government that would otherwise have been forced to change their negative policies have been instead kept afloat by the World Bank, allowing them to continue to behave inefficiently. [13] Bandow also argued that international aid  inflates the public sector in recipient states like Mexico, which used World Bank loans to expand its number of state-owned corporations from 300 in 1970 to about 1,200 by 1982. [14]

In addition to being accused of inefficiency, the World Bank has also been accused of abetting human rights abuses. Libertarian author James Bovard pointed out that the World Bank gave the government of Indonesia over $600 million to “remove—sometimes forcibly—several million people from the densely populated island of Java and resettle them on comparatively barren islands.” [15] Australian critic Kenneth Davidson compared the “transmigration” of Indonesians from Java to “Lebensraum,” Nazi Germany’s policy of ethnic cleansing in occupied Eastern Europe. [16]

In August 1978, the World Bank loaned the Vietnamese government $60 million despite reports of concentration camps, political oppression, and state-sanctioned murder in the state. [17] The World Bank also gave development aid to Ethiopia’s Derg regime while it conducted forced population transfers during a famine which killed at least 400,000 people. [18] The World Bank’s commitments to Ethiopia made up about 16% of the government’s total budget in 1985. [19]

The IBRD receives funding by issuing securities to investors, while the IDA relies on contributions from its 173 member states. [20][21] In 2018, the IDA began to transition to a new financial model, combining funding from donors with funding raised in capital markets. [22]

David Malpass is the current president of the World Bank Group. [25] He was the former chief economist at New York-based investment bank Bear Stearns and worked as an economic advisor to former President Donald Trump’s 2016 presidential campaign. [26] Malpass has pushed the World Bank to halt lending to China and has pushed for reforms that encourage middle-income economies to borrow from the private sector, rather than relying on World Bank funding. [27]

Anshula Kant works as chief financial officer of the World Bank. She started her career in the State Bank of India (SBI) in 1983 as a probationary officer. [28] She later held several key positions in SBI, including chief general manager of Mumbai Circle and CEO at SBI Singapore. [29]

In April 2013, a graduate student at University of Massachusetts discovered methodological errors in a Reinhart paper titled “Growth in a Time of Debt” after he failed to replicate its findings as part of an assignment. [33] The paper, which heavily influenced so-called “austerity” policies, argued that “economic growth slows dramatically when the size of a country’s debt rises above 90 percent of Gross Domestic Product.” [34]