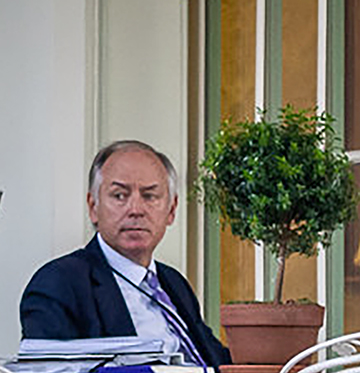 Steve Ricchetti is a Democratic operative, lobbyist, and Counselor to President.

In 1982, Steve Ricchetti started his career as a special legal assistant at Allied Corp, a Canadian pharmaceutical company. In 1987, Riccetti moved to Blue Cross Blue Shield, where he worked as executive director of congressional communications. In both roles, Ricchetti worked as a lobbyist to Congress. [1]

In 1990, Ricchetti moved into politics as the executive director of the DSCC, working to coordinate U.S. Senate campaigns for the Democratic Party. In 1993, Richetti joined the executive branch as Deputy Assistant to the President for Legislative Affairs under then-President Bill Clinton. In the role, he lobbied the U.S. Senate on behalf of the Clinton administration[2] and was part of President Clinton’s debate preparation team. [3]

In 1998, Ricchetti left government to create the lobbying firm Ricchetti and Associates along with his brother, Jeff Ricchetti, and former Federal Communications Commission (FCC) staffer Jay Heimbach. The firm only operated for one year, in which 12 clients paid $1.4 million for lobbying services. The clients included the Ricchettis’ former employers Allied Corp and Blue Cross Blue Shield, which paid $373,000 together. [4]

In 1999, Ricchetti succeeded Podesta as Deputy Chief of Staff in the Clinton administration. [7] Ricchetti combatted efforts to remove President Clinton from office by the U.S. Senate. He was known to be a close friend of then-First Lady Hillary Clinton, with some staffers nicknaming him “Rodham Ricchetti.” [8] In 2000, Ricchetti played a key role in drafting diplomatic plans that led to the normalization of trade relations with China. [9]

In 2001, Ricchetti again left the White House with the end of the Clinton administration. He then founded another lobbying firm, Ricchetti Inc, along with Jeff Ricchetti, Jay Heimbach, and former Clinton administration staffer Lisa Kountoupes. Steve Ricchetti ran the firm until 2012, though it continues to operate as of May 2021. [10] Ricchetti allegedly told friends that the lobbying firm was just an “exile project” while Republicans controlled the executive branch, and that he was eager to return to politics. [11]

In 2008, Steve Ricchetti ended his registration as a lobbyist but continued to run the firm. [13] Some have speculated that Ricchetti ceased registering as a lobbyist in order to bypass an Obama administration rule which required staff members to cease lobbying for two years before starting work in the administration. [14] In the same year, Richetti worked on former U.S. Senator Hillary Clinton’s (D-NY) presidential campaign. [15] Allegedly, Ricchetti’s behavior on the campaign permanently damaged his relationship with the Clinton family when he brought up how Clinton should respond to media inquiries about her husband’s well-known infidelities in a strategy meeting. [16]

In 2012, Ricchetti joined the board for the left-of-center Center for American Progress (CAP), a Washington D.C. think tank founded by John Podesta. [17]

That year, Ricchetti joined the Obama administration and began working with then-Vice President Joe Biden as a counselor. According to Politico, the position was considered a demotion to Ricchetti who took a spot under the vice president rather than the president after alienating the Clintons with his campaign conduct and alienating President Obama by his association with the Clintons. [18]

In 2013, Ricchetti was promoted to Chief of Staff to the Vice President. [22] Ricchetti has been credited with amplifying Vice President Biden’s role in the Obama administration. Ricchetti remained in the role throughout President Obama’s second term. [23]

After Vice President Biden refused to run, Ricchetti and Donilon organized a network of nonprofits to prepare for a future presidential run. Ricchetti briefly ran the Penn Biden Center for Diplomacy, a think tank based out of the University of Pennsylvania. [26] Ricchetti also became Biden’s personal business manager and helped him the Biden family set up a major book deal and tour, which earned over $15 million for the Bidens. [27]

In 2019, Ricchetti was appointed finance chair and campaign chairman of the Biden 2020 presidential campaign. [28] [29] The New York Times described Ricchetti’s work as critical to the survival of President Biden’s Democratic primary campaign in the beginning of 2020 when the early frontrunner struggled to keep up with U.S. Senators Bernie Sanders (D-VT) and Elizabeth Warren (D-MA). [30]

After the election Ricchetti was named Counselor to the President in the Biden White House. [31]