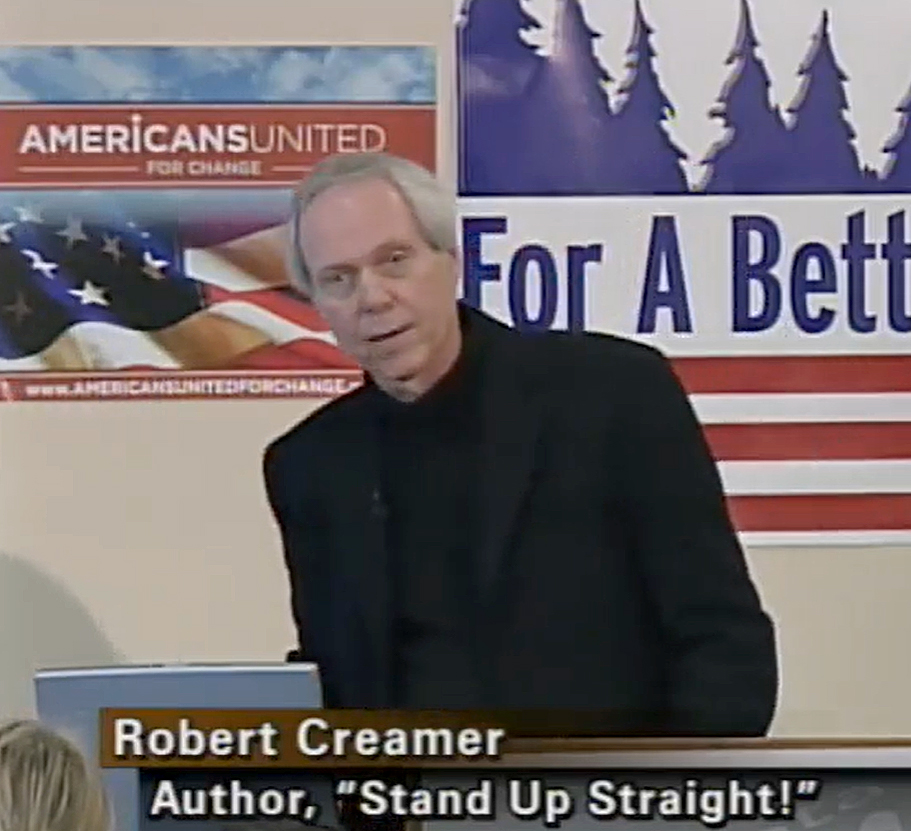 Robert Creamer has been a left-leaning political operative since 1970 and is a co-founder of Democracy Partners (DP), a liberal political consulting firm that supports Democratic Party political campaigns and issue campaigns promoting left-of-center policies. [1] [2] In late 2005, Creamer pleaded guilty to bank fraud and non-payment of taxes relating to his 22 years of working with Citizen Action Illinois, and was sentenced to five months in a federal prison and 11 months of home detention. [3] [4]

Creamer is married to U.S. Rep. Jan Schakowsky (D–Illinois), a left-wing politician who has numerous associations with the Democratic Socialists of America (DSA),[5] and both Creamer and Schakowsky have reported socialist affiliations dating to the 1970s. [6] Creamer was an active policy and political ally of the Obama administration, visiting the Obama White House 342 times and President Barack Obama himself 45 times, to support Obamacare and many other policy goals. [7] [8] In his official Democracy Partners biography, Creamer notes that he “worked as an organizer with Saul Alinsky’s last major project in Chicago,” referring to the far-left community organizer infamous for devising much of the modern Left’s use of deception, misdirection, and violence as political tactics. [9]

In 2016, surreptitiously recorded videos of Creamer and a subordinate appeared to implicate Creamer in schemes to incite disturbances and physical altercations at rallies supporting then-Republican Presidential candidate Donald Trump. Right-wing media outlet Project Veritas released the videos in October 2016, shortly before the general election. The videos show Creamer’s subordinate, Scott Foval, bragging of creating “anarchy” and paying the mentally ill to carry out the schemes. Creamer announced he was removing himself from participation in the 2016 Presidential race after the release of the video, but denied wrongdoing. [10] [11]

Robert Creamer has been a left-leaning political operative since 1970, when he began working in Chicago with the Citizen Action Program (CAP), a creation of the radical far-left organizer Saul Alinsky’s Industrial Areas Foundation. [12]

He is the author of Listen to Your Mother: Stand Up Straight: How Progressives Can Win (2007). Among the book’s strategic suggestions is passage of an amnesty law and path to citizenship for currently-undocumented aliens, which he asserts would create “gigantic block of progressive voters—a block that could be decisive in the battle for the future.” Similarly, he proposes ending the influence of private health insurance companies, which he asserts would create a general reliance on the federal government that would benefit left-of-center politicians. [16]

Creamer is from Illinois and is married to U.S. Rep. Jan Schakowsky (D-Illinois).

As of mid-2019, Creamer was a board member of Chicago-based Midwest Academy, continuing an association with the far-left training project for community organizers that began in the early 1970s. [17]  Midwest Academy was founded in 1973 by Heather Booth and other activists from the radical Students for a Democratic Society. In 1969 Booth and other soon-to-be founders of Midwest Academy wrote the pamphlet “Socialism and the Coming Decade,” a manifesto advocating a long-term community organizing strategy to create a mass movement for socialism. [18] [19]

Despite the low-key strategy of Midwest Academy, Booth retained a belief that more assertive steps might be needed, telling a socialist-feminist conference in 1975: “Truly reaching socialism or feminism will likely take a revolution that is in fact violent, a rupture with the old ways in which the current ruling class and elites are wiped out.” [21] Booth, as of 2019, remains chair of the Midwest Academy board that also includes Creamer. [22]

Ethics & Public Policy Center researcher Stanley Kurtz[24] has written that IPAC “was effectively the Midwest Academy’s action arm,” and that a “number of socialists served on IPAC’s governing board.” [25]

Kurtz also identifies Cramer’s second and current wife, Jan Schakowsky (now a U.S. Representative representing northern Cook County, Illinois), as IPAC’s program director from 1976 to 1985. His research into the files of the Chicago affiliate of the Democratic Socialists of America (DSA) show Schakowsky to have had continuing associations with the DSA, updating the socialist organization regarding “IPAC’s annual conference … its political program, and the continuing role of DSA members on IPAC’s board.” [26]

In June 1997, days after being questioned by the FBI about a multi-million-dollar check kiting scheme taking place at banks in Chicago and in Portland, Oregon, Creamer resigned as executive director of Citizen Action Illinois, the left-wing public advocacy organization he had founded as the Illinois Public Action Council (IPAC) 22 years earlier. The FBI’s investigation would eventually result in Creamer pleading guilty in 2005 to bank fraud and non-payment of taxes. In April 2006, he was sentenced to five months in a federal prison to be followed by 11 months of home confinement. [27] [28]

At the time of Creamer’s resignation from Citizen Action Illinois, the Chicago Tribune reported numerous irregularities that had been taking place at the organization and its predecessor while both were under Creamer’s supervision. “Beneath the group’s carefully crafted image of respectability and influence were problems that had festered for years,” reported the Tribune. “The biggest: The group was financially overextended and used questionable techniques to raise funds.” [29]

Among the concerns raised by the newspaper:[30]

During the 2016 Presidential election, in his role as a consultant with Democracy Partners, Creamer was directing some parts of the sprawling collection of political advocacy groups that supported Democrat Hillary Clinton’s Presidential campaign. In mid-October 2016, just weeks shy of the election, right-wing outfit Project Veritas released videos showing a Creamer subordinate then working through Americans United for Change boasting in front of a hidden camera about controversial political stunts, such as his and Creamer’s alleged involvement in inciting disturbances at Trump campaign events. Within days of the videos’ release, Creamer announced he was removing himself from Clinton campaign activity. [31]

Speaking to an undercover Project Veritas staffer, the Creamer subordinate, Scott Foval, brags about their role in using agitators to create “conflict engagement in the lines at Trump rallies” with the goal of “starting anarchy” at the events and obtaining negative media coverage for the then-Republican candidate. “We know that Trump’s people will [tend to] freak the f*** out…,” Foval said in a video. “It is not hard to get some of these assholes to ‘pop off.’”[32]

Foval describes Creamer’s role as the “kingpin” who is “diabolical, and I love him for it.” [33]

One example Foval cites is a September 2016 event in North Carolina where a 69-year-old woman demonstrating against Trump was struck by a Trump supporter. On one Project Veritas video, Foval claims the woman as “one of our activists.” [34]

In another incident, from August 2015 in Iowa, Foval alleges Creamer was behind the work of a protester in Iowa who shoved a sign in the face of former Wisconsin Gov. Scott Walker, then a candidate for the Republican Presidential nomination. A report from the Wisconsin State Journal says the demonstrator disrupted the rally by shoving the sign “inches” from the face of Walker as he tried to speak. Walker denounced the protester, saying “I am not intimidated by you, sir!” This was followed by a scuffle in which another attendee ripped the sign away and tore it up. [35] [36]

The videos also capture Foval bragging of a history of “twenty years” of such behavior, stating the involvement of organized labor (“A lot of union guys, they’ll do whatever you want”), and exploiting the mentally ill (“I’m saying we have mentally ill people that we pay to do shit, make no mistake”). [38]

“It doesn’t matter what the friggin’s legal and ethics people say,” says Foval in the videos, regarding the corners they might be willing to cut. “We need to win this mother***er!”[39] Creamer also unwittingly appears in the hidden camera videos, making statements which—along with other revelations from Foval—have led to speculation regarding whether the duo participated in schemes to help non-citizens vote and commit other election law violations. [40]

Democracy Partners issued a response alleging they had been the “victim of a well-funded, systematic spy operation that is the modern day equivalent of the Watergate burglars,” and the intent had been to “goad unsuspecting individuals into making careless statements on hidden cameras” that “do not reflect our values.” Shortly after release of the videos, Foval was laid off by Americans United for Change. [41] [42]

During the George W. Bush administration, Creamer worked in 2005 with Americans United to Protect Social Security (which later became Americans United for Change[43]) to impede the President’s attempt to reform Social Security. In this capacity, he was arrested in June 2005 while participating in an Americans United to Protect Social Security demonstration to protest President Bush’s arrival at the Capitol Hilton in Washington, D.C. A Chicago Tribune account of the incident quotes police claims that Cramer “charged officers as Bush’s motorcade pulled up.” At his court appearance, Creamer pleaded not guilty. (This incident occurred after Creamer’s federal indictment for fraud, but before his guilty plea and sentencing in that separate legal matter). [44]

In 2003, Creamer worked as a consultant to oppose the Bush tax cuts. During the 2008 and 2012 Presidential races, he was a consultant to the Democratic National Committee (DNC), leading rapid response teams replying to Republican candidates and campaigns. [45]

Creamer was very active assisting the Obama administration on many projects. White House logs show he visited 342 times, and U.S. Sen. Ted Cruz (R-Texas) revealed 45 of those meetings were with the President. [46]

As a consultant with Americans United for Change, he assisted with passage of President Obama’s economic plan during the first term and then during the second term, participated in the work leading to the Iran Nuclear Agreement in 2015. Other federal issue campaigns he worked on during the Obama years included passage of Obamacare, as well as efforts to increase the minimum wage, secure liberal expansionist immigration policy, enact gun control, and confirm Supreme Court nominees. [47]