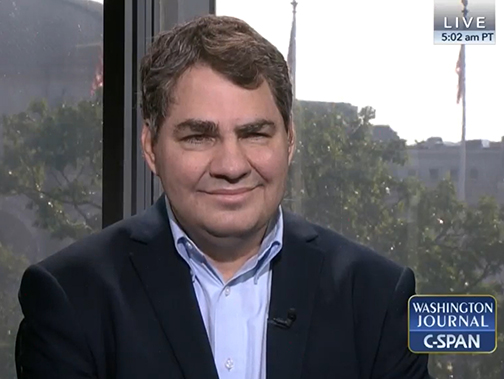 Mike Lux is a Democratic political strategist affiliated with Democracy Partners, and his own firm, Progressive Strategies LLC. His client list has included the League of Conservation Voters, Planned Parenthood, and Democracy Alliance. He is a board member at the Arca Foundation and was involved in the founding of the Center for American Progress. [1] [2] He is also on the advisory committee of Our Story Hub, a project of the Proteus Fund which advises left-of-center politicians and groups on communications strategies. [3]

Lux was a White House employee during the administration of President Bill Clinton, served on the Obama–Biden Presidential transition team, and was also a staffer for the 1988 Joe Biden Presidential campaign. In the late 1990s he worked at People For the American Way. [4] [5]

He has written two books. How to Democrat in The Age of Trump (2018) is a strategic manifesto advising Democrats they will win more elections and reconnect with “working class” voters by pivoting away from centrist Democrats and more strongly toward the “grassroots” left on issues such as energy policy, criminal justice, campaign finance restrictions, immigration, and attacking the financial industry. [6] The Progressive Revolution: How the Best in America Came to Be (2009) is Lux’s history of the ideological conflict between the left and right throughout American history and the instances where he believes “progressives” have won these battles. [7]

He was a “liaison to the progressive community” for the Obama–Biden Presidential transition team, and was a staffer for former Vice President Joe Biden’s 1988 Presidential campaign. From 1992 through 1995 Lux worked in several political and policy roles related to health care and budget in the Clinton White House and the 1992 Bill Clinton Presidential campaign. During the late 1990s he was the senior vice-president for political action at People For the American Way and the PFAW Foundation. [9] [10]

Lux was involved in the founding of the Center for American Progress, Americans United for Change, the Ballot Initiative Strategy Center, Progressive Majority PAC, and Women’s Voices/Women Vote. He is the founder and chair of American Family Voices, a board member of the Arca Foundation, and a former board member of Netroots Nation. [11] [12]

Following the 2016 Presidential election, Lux began advising that Democrats could win back “working class” voters by embracing and promoting the party’s more left-leaning ideology and activists. He has outlined this strategy in his 2018 book, How to Democrat in The Age of Trump, and in opinion pieces and media appearances. His book made Amazon’s top 20 list for commentary. [13]

Lux has asserted that centrist politics – the willingness of Democrats to advance bi-partisan policy changes with Republicans – has failed because “the center became corrupted and stopped working for working people.” As examples he has pointed to passage of the North American Free Trade Agreement, welfare reform, and financial deregulation prior to 2008 – all proposals created and approved by bi-partisan coalitions during the Clinton administration. [14]

He has argued that “Democrats broke their own political coalition,” and need to rebuild the “bridge between grassroots progressives and the party’s leaders” with a “message that embraces the passions, values, and agenda of grassroots leaders.” Lux proposes this bridge should be constructed with a further left-wing tilt by the Democratic Party on issues such as energy policy, criminal justice, campaign finance restrictions, immigration and attacking the financial industry. [15]

In a July 2018 essay titled “Left Politics Can Win All Over the Country,” Lux asserted this strategy would succeed both in progressive big city districts and across middle-America. As examples, he noted three then-recent Democratic Congressional primary victories by left-leaning Democrats over establishment Democrats: socialist Alexandria Ocasio-Cortez in New York City, Kara Eastman in Omaha, Nebraska, and Amy McGrath in Lexington, Kentucky. Ocasio-Cortez later won her general election in an overwhelmingly Democratic district, while Eastman and McGrath each lost general elections to incumbent Republican Representatives. [16]

Lux wrote one prior book, The Progressive Revolution: How the Best in America Came to Be, published in 2009. It is his history of the ideological contest between the American right and left since the nation’s founding, and what he asserts are instances were “progressives have broken through in what I call “Big Change Moments” that have fundamentally remade our country for the better.” [17]