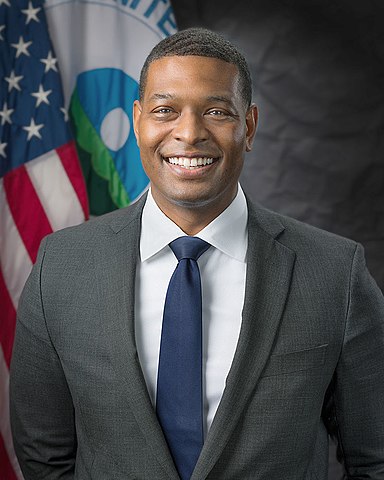 Michael S. Regan is a left-of-center environmental activist who is serving as Administrator of the Environmental Protection Agency (EPA) in the Biden administration. Previously, Regan was Secretary of North Carolina’s Department of Environmental Quality under Governor Roy Cooper (D-NC). [1]

Michael S. Regan was born on August 6, 1976 in Goldsboro, North Carolina. His mother worked as a nurse and his father, a Vietnam War veteran, retired as a colonel in the North Carolina National Guard. [2]

In 1998, Regan graduated from the North Carolina Agricultural and Technical State University’s College of Agriculture and Environmental Sciences. [3] He began interning for the EPA and was soon hired as a full-time staffer. Regan worked at the EPA for ten years, eventually managing the national EPA program on reducing pollution and improving energy efficiency and air quality. [4] While working at the EPA, Regan graduated with a master’s degree in public administration from George Washington University. [5]

From 2008 to 2013, Regan was the director of the EDF’s Southeast Climate and Energy program. During this period, Regan worked alongside environmentalist organizations including the Sierra Club, the Southern Environmental Law Center (SELC), the Southern Alliance for Clean Energy, and the National Parks Conservation Association to retire coal plants operated by North Carolina’s Duke Energy company. In 2013, he was promoted to associate vice president of the EDF. [7]

Regan left the EDF and briefly started his own environmental consulting firm, M. Regan & Associates. He dropped this venture when he was appointed by North Carolina Governor Roy Cooper (D) as Secretary of the North Carolina Department of Environmental Quality. One of his first actions was to establish the Environmental Justice and Equity Advisory Board, which gave left-wing advocates against so-called “environmental racism” a say in the state’s environmental policy. [8]

During his time as secretary, Regan won a multi-billion-dollar settlement from Duke Energy, the state’s largest electric utility, for coal ash clean up. [9] Similarly, Regan reached an agreement with North Carolina’s Chemours Company to clean up the company’s PFAS pollutants in the Cape Fear River. [10]

Regan was also responsible for denying key permits for the Mountain Valley pipeline, a natural gas pipeline that would have extended from West Virginia to North Carolina. Regan called the pipeline “unnecessary” and rejected permits when the pipeline was estimated to be 92% complete. [11] A professor at West Virginia University’s Bureau of Business and Economic Research projected that Regan’s decision likely cost thousands of construction and engineering jobs, in addition to untold damage to America’s goal of energy independence. [12]

Regan was frequently critiqued by the left throughout his tenure as secretary. He was accused of being too soft on business and labeled as having a “mixed record on environmental justice issues” by the left-wing environmentalist organization Greenpeace. [13]

Administrator of the Environmental Protection Agency

In December 2020, President Joe Biden announced that Regan would be nominated as administrator of the EPA. His selection was celebrated by North Carolina’s Republican Senators, Senators Richard Burr and Thom Tillis, who praised Regan as fair and bipartisan. [14]

He was confirmed by the U.S. Senate, despite concerns from Senate Republicans that Biden administration climate advisor Gina McCarthy would force her agenda on Regan, effectively acting as “a shadow EPA chief.” [15]

In July 2021, President Joe Biden announced his plan for a door-to-door outreach program to ensure that the U.S. reaches Biden’s desired 70 percent vaccinated threshold. Biden said that the plan was to “to go to community by community, neighborhood by neighborhood, and oftentimes, door to door—literally knocking on doors—to get help to the remaining people.” [16]

Charlotte-based left-leaning nonprofit Action NC answered the president’s call by going door-to-door to spread information on the vaccine and convince unvaccinated adults to get the vaccine at their local pharmacy or vaccine distributor. [17] Eventually, Action NC launched a “doses to the door” program where Action NC volunteers were accompanied by a Mecklenburg County Health Department vehicle. When volunteers found someone willing to get the vaccine, the volunteer could call the on-site medical professionals to administer the vaccine. [18] Those who chose to get the vaccine also received a $25 gift card. [19]

On the day of the program’s launch, Michael Regan spoke to Action NC volunteers and thanked the volunteers for their targeted outreach. He told volunteers that to reach President Biden’s 70 percent goal, “it’s going to take every single one of us.” [20]

Meeting with heads of environmentalist organizations

In April 2021, shortly after being appointed head of the EPA in March of that year, Regan met with the heads of several left-of-center environmentalist groups with ties to both the Arabella dark-money network as well as the foundation network owned by Swiss entrepreneur Hansjorg Wyss. Such groups included the Natural Resources Defense Council (NRDC), the League of Conservation Voters (LCV), the Environmental Defense Fund (EDF), and the Center for American Progress (CAP), of which Wyss is a founder and a member of the board of directors. [21]

In addition to the April meeting, Regan met with the heads of these and other organizations in multiple instances throughout 2021: meeting with LCV president Gene Karpinski, meeting NRDC president Manish Bapna and speaking at an NRDC panel in April 2021, attending LCV and NRDC board meetings, meeting with CAP founder John Podesta, and meeting both EDF president Fred Krupp and hedge fund billionaire and climate activist Tom Steyer. [22]