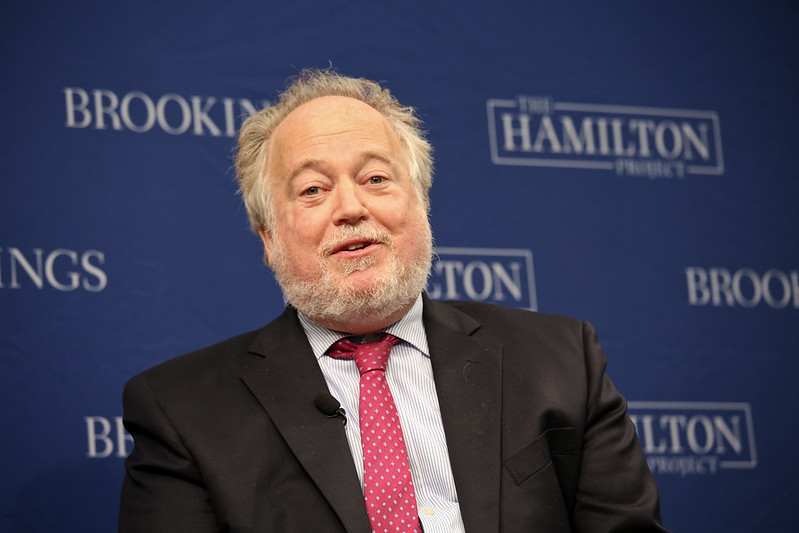 Lawrence Mishel is an author, economist, and former president of the left-of-center and labor-union-aligned Economic Policy Institute (EPI). Mishel has written a number of books on economic policy and has contributed to various left-of-center media outlets. [1]

Mishel has appeared in front of the Democratic National Convention Platform Drafting Committee;[2] at a meeting of the socialist Geneva Group;[3] and on “Progressivism on Tap,” a discussion and lecture series for the Center for American Progress (CAP). [4]

Lawrence “Larry” Mishel is an author, economist, and distinguished fellow at the Economic Policy Institute (EPI), a research institution funded, chaired, and promoted by labor unions and their supporters.

Mishel later became vice president and then president of EPI in 2002. [9] Mishel stepped down as president in 2017, handing his role to Thea Lee. Lee previously worked in various roles at the AFL-CIO and sits on the advisory committee of Our Story Hub, a project of the Proteus Fund, which advises left-of-center politicians and groups on communication strategies. [10]

Before he joined EPI, Mishel worked in various positions, including as a fellow at the U.S. Department of Labor. Mishel was also a faculty member at Cornell University’s School of Industrial and Labor Relations and worked as an economist for multiple labor unions, including the United Auto Workers (UAW), the United Steelworkers (USW), AFSCME, and the AFL-CIO. [11]

Mishel co-authored The State of Working America, a series of twelve books that have been written every two years since 1988. This series of books has been used as a resource by news outlets, school papers, and political papers. [12]

Mishel also authored Manufacturing Numbers: How Inaccurate Statistics Conceal U.S. Industrial Decline and Better Jobs or Working Longer for Less in 1988, The Myth of the Coming Labor Shortage: Jobs, Skills, and Incomes of America’s Workforce 2000 in 1990, Unions and Economic Competitiveness in 1992, Beware the U.S. Model: Jobs and Wages in a Deregulated Economy in 1995, The Class Size Debate in 2002, Rethinking High School Graduation Rates and Trends in 2006, and Failure by Design: The Story Behind America’s Broken Economy in 2011. [13]

Mishel has also written for left-of-center organizations, including the Ford Foundation[22] and the National Education Policy Center,[23] and appears in a panel discussion called “Importing Poverty” that is listed on the Center for Immigration Studies website. [24]

Mishel, on behalf of the EPI, appeared in front of the Democratic National Convention Platform Drafting Committee to propose the creation of a policy agenda to address alleged wage stagnation, claiming that political officials had created intentional wage stagnation. Mishel advocated for a number of left-of-center policies to purportedly fix wage stagnation, including raising the federal minimum wage and providing paid sick leave for all workers. [25]

Mishel appeared at a Geneva Group meeting in 2010. The Geneva Group was formed to bring together “socialist political leaders and leaders of international organizations” to create a “common response among socialists and social democrats to the challenges of globalization.” [26]

Mishel also appeared on the Center for American Progress (CAP) lecture and discussion series “Progressivism on Tap.” [27] CAP is a left-of-center Washington, D.C.-based think tank with strong ties to the Democratic Party establishment. CAP was created in 2003 by John Podesta, former White House Chief of Staff for President Bill Clinton, Counselor to the President in the Obama White House, and chair of former U.S. Secretary of State Hillary Clinton’s 2016 Presidential campaign. [28]

Mishel was listed as a board member of the Congressional Progressive Caucus Center (CPCC). [29] CPCC works as the advocacy and think-tank arm of the Congressional Progressive Caucus, a left-wing congressional caucus within the Democratic Party. [30] The Center aims to move the Democratic Party’s policies further to the left on issues including abortion, labor, environmentalism, healthcare, and fiscal policy. [31]