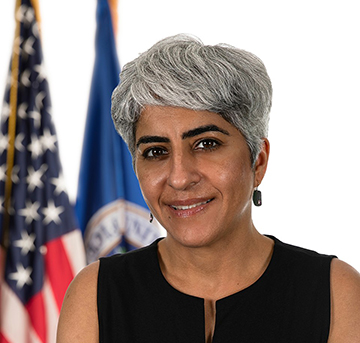 Kiran Ahuja is a lawyer and left-of-center racial issues activist nominated to serve as Director of Office of Personnel Management (OPM) in the Biden administration. Under former President Barack Obama, she was Chief of Staff at OPM, which oversees the federal government’s civilian workforce.

After leaving the Obama administration, she became CEO of Philanthropy Northwest, a prominent regional charity network that assists left-of-center and apolitical nonprofit organizations. [1]

In February 2021, President Joe Biden nominated Ahuja for the position of OPM Director. [2] In April 2021, the U.S. Senate Homeland Security and Governmental Affairs Committee advanced her nomination with a 7 to 5 vote. She did not receive the support of any Republican members of the committee. [3]

Kiran Ahuja received her law degree from the University of Georgia and went on to work as a civil rights lawyer in the U.S. Department of Justice. She litigated school desegregation cases and filed the DOJ’s first student racial harassment case. [4]

Kiran Ahuja was Chief of Staff of the OPM, which oversees the federal government’s civilian workforce, during the Obama administration. She also oversaw the White House Initiative on Asian Americans and Pacific Islanders. [5] The OPM has its roots in the Civil Service Commission, which was created in 1883 to reform the process of hiring federal employees by making it more merit-based and attempting to end the practice of politicians granting jobs to political allies. In 1978, the Commission was reorganized as three separate organizations, including the OPM. [6]

Pending her appointment to the Biden administration, Kiran Ahuja is the chief executive officer of Philanthropy Northwest, a network of grantmaking organizations that receives funding from large corporations including Boeing, Microsoft, and Bank of America. Philanthropy Northwest also receives funding from the United States government. The network overwhelmingly consists of left-of-center groups, some of which promote far-left policies such as eliminating all funding for law enforcement. The philanthropic consulting firm Arabella Advisors, which directs hundreds of millions of dollars towards left-of-center causes, is a member of Philanthropy Northwest. [7][8]

During the race protests and riots during the summer of 2020, Ahuja wrote a statement accusing the United States of being a systemically racist country and pressured readers to give money to organizations affiliated with the left-of-center Black Lives Matter movements, in addition to donating to groups that bail out rioters when they get arrested. Ahuja, an immigrant from India, described America’s history as “racialized” and “racist.” The statement cited radical-left scholar Ibram X. Kendi, who claims that racial disparities are always a consequence of societal institutions and that any government policy that results in disparate outcomes is racist. Ahuja concluded the statement by telling readers to “find an Accountability Person” who would remind them of their own alleged “complicity” in racism. [9]

President Biden nominated Ahuja for Director of the Office of Personnel Management (OPM) in February 2021. [10] In April 2021, the U.S. Senate committee responsible for approving presidential appointees advanced Ahuja’s nomination. None of the five Republicans on the committee voted in favor of advancing the nomination. U.S. Senator Josh Hawley (R-MO) cited Ahuja’s track record of promoting far-left views on race and her alleged support for training government agencies using left-wing critical race theory. Ahuja claimed that she did not “know the specifics” of the training, which former President Donald Trump had banned and President Biden reinstated on his first day in office. U.S. Senator Rob Portman (R-OH) also cited what he described as Ahuja’s support for far-left race ideology, as well as her support for legalized abortion, as reasons to oppose her nomination. [11]

The right-of-center Washington Free Beacon reported that President Biden’s decision to nominate Ahuja was part of his broader effort to shift the political environment at the OPM to the left. The Beacon pointed out that President Biden’s OPM Communications Director Caroline Ciccone previously led the group Accountable.US, which pressured corporations not to hire or associate with former Trump administration officials. The Beacon also cited Ahuja’s own track record of left-of-center activism and endorsements of far-left rhetoric on race. [12]