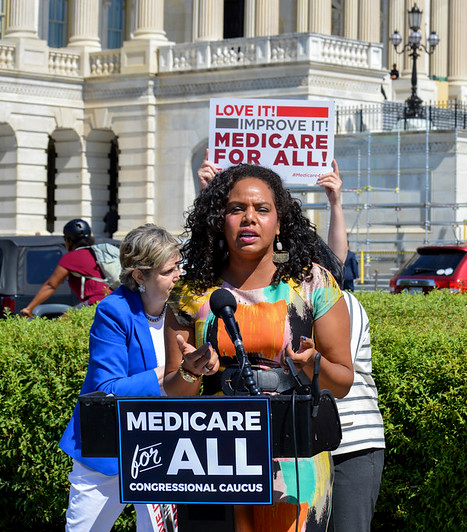 Epps-Addison also has a long history of working with labor union campaigns. She coordinated the Fight for $15 campaign in Wisconsin, [2] was the lead organizer of the Milwaukee Opportunities Restoring Employment (MORE) Ordinance, [3] and as the former Economic Justice Program Director of Citizen Action of Wisconsin, Epps-Addison led a campaign to pass the Milwaukee Jobs Act. [4]

Epps-Addison is the former Executive Director of the labor union-backed coalition Wisconsin Jobs Now, where she coordinated the Fight for $15 campaign. [7]

Epps-Addison was a featured speaker at the 2018 She the People Summit, a national summit of ethnic minority women in left-wing politics. [8]

Epps-Addison was one of 100 black leaders who signed “A Letter From Our Movement to Our Movement,” addressing the conflict that occurred after the Working Families Party (WFP) announced the early endorsement of the nomination of U.S. Senator Elizabeth Warren (D-MA) for President in 2020. The letter was written after self-identified supporters of Bernie Sanders publicly made violent and racist threats against the two black leaders of the WFP. The demanded that Sanders’s 2020 presidential campaign issue a public statement denouncing racism in its ranks. [9]

Epps-Addison was the lead organizer of the Milwaukee Opportunities Restoring Employment (MORE) Ordinance, [10] requiring that government assisted development projects hire unemployed and underemployed residents for at least forty percent of their projects. It also mandates that twenty-five percent of public works and city development contracts be awarded to disadvantaged small business owners. [11]

In 2013, Epps-Addison was named “Activist to Watch” by left wing journalist Bill Moyers. That same year, she received the Edna Award, recognizing her as a leader in the social justice movement, from the Berger-Marks Foundation (now Women Innovating Labor Leadership (WILL)). [12]

Epps-Addison was the vice president of the Milwaukee Workers Organizing Committee (MWOC), a union funded by the Service Employees International Union (SEIU) as part of the Fight for $15 corporate campaign against restaurants. [14]

Epps-Addison has served on the boards of labor union-aligned economic policy groups like the Partnership for Working Families, 9to5 Wisconsin, and the Milwaukee 7 Regional Economic Partnership. [15]