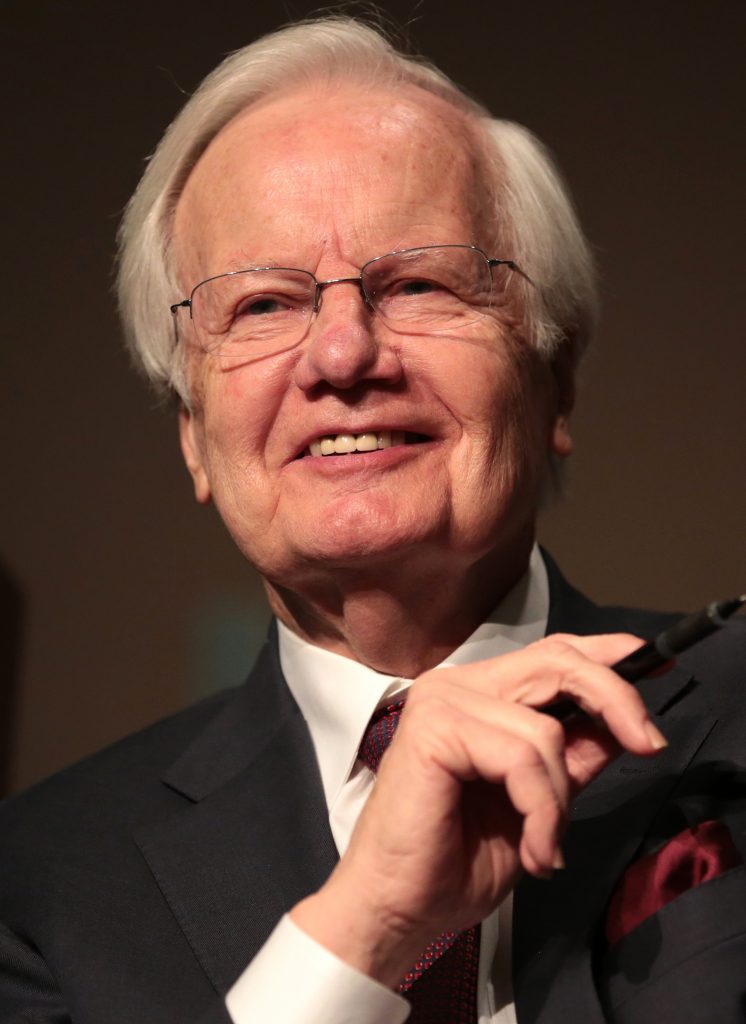 Moyers earned a reputation for hard-nosed politicking on behalf of the Johnson administration. [2] He was allegedly involved in the Johnson administration’s use of the FBI to surveil political opponents, administration officials suspected of then-taboo homosexuality, and civil rights activists, most prominently Martin Luther King, Jr. Moyers allegedly instructed the FBI to distribute surveillance documents concerning King to government officials and allegedly was aware of efforts to leak the King tapes to the press. [3]

Moyers retired from journalism in December 2017 when he made his final post on his website. [4] While he was active, Moyers was controversial due to some of the biased statements he made on taxpayer-funded PBS. He was also accused of conflict of interest on his shows by promoting guests who represented organizations which received grants from the Schumann Center. [5]

Billy Don Moyers was born in 1934 in Hugo, Oklahoma. He was the son of a laborer. He was raised in the town of Marshall in east Texas. [6] He got his journalism start at the age of 16 as a reporter for the Marshall News Messenger. [7]

He attended university at North Texas State University in Denton, Texas, where he worked for the local newspaper. In 1954, he wrote to the office of then- U.S. Senator Lyndon B. Johnson (D-TX) asking for a job. That summer, he got a job in the mail room of Johnson’s Washington, D.C. office. [8]

Johnson then urged Moyers to transfer to the University of Texas in Austin, which he did. Moyers wrote for the Daily Texan newspaper. Then Moyers began to work in broadcasting for the first time. He worked as assistant news editor for Austin radio and television network KTBC, which was owned by Johnson’s wife, Lady Bird. [9]

After leaving Scotland, Moyers entered seminary with the intent on becoming a Baptist preacher. He entered the Southwest Baptist Theological Seminary in 1957. He would graduate in 1959 with a masters in divinity he would become an ordained minister. He then accepted a lectureship at Baylor University. [12]

After Kennedy was assassinated, Moyers would become special assistant to the new president, Lyndon Johnson. Among Moyers’s jobs was supervising the task forces response for the expansion of the welfare state known as the Great Society. [15]

Moyers is credited with authorizing the infamous “Daisy” advertisement from the Johnson campaign. [16] The ad implied that Goldwater would cause a nuclear war if he were elected. [17]

In 1965, Bill Moyers was promoted to White House press secretary. In his role, he spun the Johnson administration’s policies in Vietnam as the war there continued to draw Americans further in. Moyers also planted questions that were favorable to the Johnson administration in the press conferences. [18] Moyers would serve as press secretary until 1967, when he had a personal falling out with Johnson; the two men reportedly never spoke to each other again. [19]

While working for Johnson, Moyers allegedly was involved in efforts by the FBI, then led by its infamous first director, J. Edgar Hoover, to investigate political opponents of the Johnson administration and the private activities of other Johnson staff. [20]

At the height of the 1964 Presidential election, Moyers was implicated in targeting the presidential campaign of U.S. Senator Barry Goldwater (R-AZ). According to federal judge Laurence Silberman, who reviewed Hoover’s secret files while he was serving as Acting U.S. Attorney General in the Ford administration, Moyers wrote a memo directing the FBI to investigate Goldwater’s staff to determine if any were gay after a Johnson aide was arrested by D.C. police for disorderly conduct in a men’s restroom weeks before the 1964 presidential election. [21]

Documents uncovered by the Washington Post also implicated Moyers in seeking information on the sexualities of White House staff including Johnson’s special assistant Jack Valenti; Moyers told the Post “his memory is unclear” when asked about it. [22]

Moyers was also allegedly involved in other controversial actions as Johnson’s special assistant. [23]

He reportedly authorized FBI surveillance of Martin Luther King Jr. and spread dirty stories about his sex life. In the 1964 presidential election, Moyers thwarted the seating of an integrated Mississippi delegation at the Democratic National Convention. [24]

CBS News correspondent Morley Safer wrote in his autobiography about Moyers’s hand in Johnson’s dirty tricks: “[Moyers’s] part in Lyndon Johnson and J. Edgar Hoover’s bugging of Martin Luther King’s private life, the leaks to the press and diplomatic corps, the surveillance of civil rights groups at the 1964 Democratic Convention, and his request for damaging information from Hoover on members of the Goldwater campaign suggest he was not only a good soldier but a gleeful retainer feeding the appetites of Lyndon Johnson.” [25]

After leaving the Johnson administration, Bill Moyers took over the suburban New York newspaper, Newsday. He shifted the paper to the left and he was the publisher until the paper was bought by the then-conservative Los Angeles Times in 1970. [26]

In 1976, Moyers joined CBS News where he was where he was editor and chief correspondent for “CBS Reports” until 1980. Then Moyers became an analyst and commentator on the network until 1986. [28]

In 1986, Moyers and his wife founded the production company Public Affairs Television. From that point, this company would produce all of Moyers’s various TV shows, which aired on PBS. The arrangement with PBS allowed Moyers to pocket the proceeds from tape and DVD sales, sales of related books, and other products related to his shows on PBS. Moyers has refused to disclose his income from PBS, but he reportedly received over $20 million from his various shows. [29]

Moyers briefly joined NBC News in 1995 as a commentator and analyst. He was the last commentator on “NBC Nightly News.” [30]

Bill Moyers became a prominent critic of the administration of President George W. Bush. He became the host of “NOW with Bill Moyers” on PBS in January 2002. [31] Moyers’s criticisms of Bush and the Iraq War proved to be so controversial that as many as 30 PBS affiliates quit airing the show during pledge drives due to its heavy partisanship in order to not offend potential donors. [32]

The show also proved controversial due to its conflict of interest. As of 2003, the show featured guests from at least 16 left-of-center organizations that received $4.8 million in grants from the Schumann Center for Media and Democracy (now Schumann Media Center), which paid Moyers $200,000 a year. The relationship between Moyers and his guests was never disclosed to his audience. [33]

In 2004, “NOW” came to end but Moyers launched an attack on the American media and accused it of having a conservative bias. “I’m going out telling the story that I think is the biggest story of our time: how the right-wing media has become a partisan propaganda arm of the Republican National Committee. We have an ideological press that’s interested in the election of Republicans, and a mainstream press that’s interested in the bottom line. Therefore, we don’t have a vigilant, independent press whose interest is the American people.” Moyers said. [34]

In November 2004, Moyers on an election-night panel discussion on PBS suggested that the right-wing would launch a coup if Democratic candidate John Kerry was elected. “I think if Kerry were to win this … in a tight race, I think there’d be an effort to mount a coup, quite frankly. … I mean that the right wing is not going to accept it.” Moyers said. [35]

Moyers would continue to have an on again, off again relationship with PBS. He would go on to air several shows on the network before retiring from PBS in 2015. He also created a website, BillMoyers.com.

In November 2016, Moyers called the election of Donald Trump as president a “whitelash” on an appearance on MSNBC’s “All In with Chris Hayes.” [36]

In December 2017, Moyers announced his retirement by signing off on his website. His website now serves an archive of Moyers’ various journalism endeavors. [37]