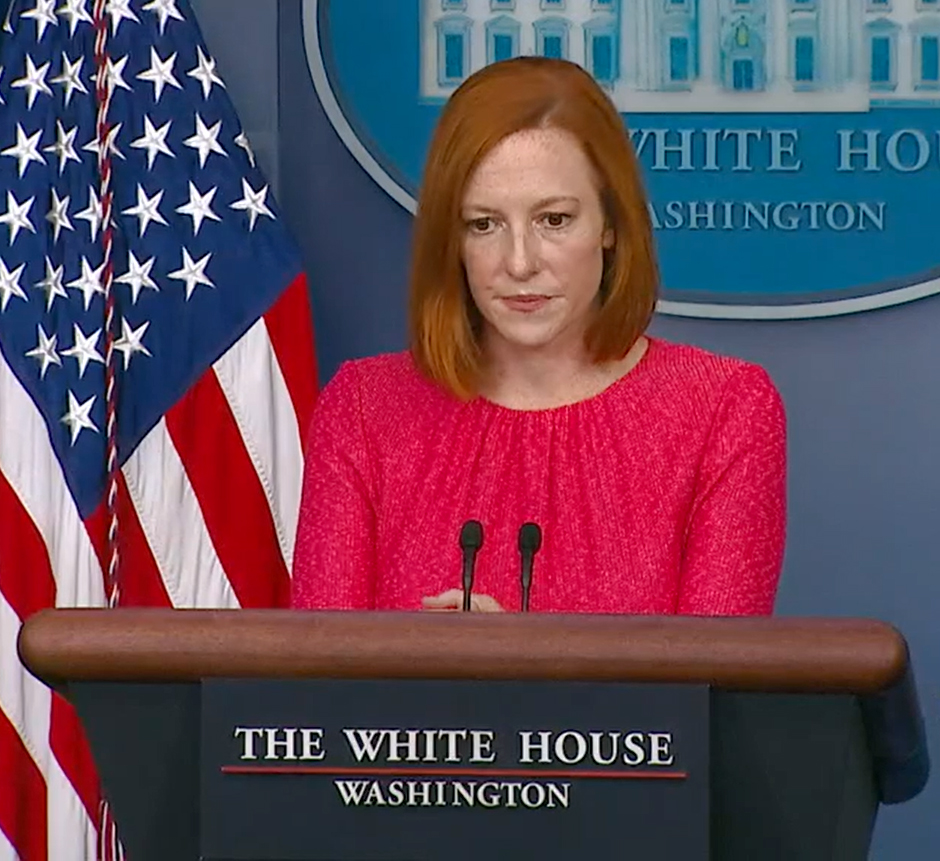 Jen Psaki is Democratic Party communications strategist best known for having served as White House Press Secretary in the Biden Administration. Psaki stepped down from her position as White House Press Secretary in May 2022, following a controversy the previous month involving her abrasive statements about a reporter whom she disliked. [1] She currently serves as a communications consultant for Demand Justice, CNN, Lyft, and several other organizations. [2] Psaki has a history of working for Democratic offices and campaigns, including as the White House communications director under Barack Obama, spokesperson under John Kerry when he was secretary of state, and for John Kerry’s 2004 presidential campaign. [3]

Jen Psaki received her bachelor of arts degree in English language and literature from the College of William and Mary. She worked for the Democratic Party in various capacities, most notably in the office of Rep. Joseph Crowley (D-NY) and the Democratic Congressional Campaign Committee, and she was involved in numerous political campaigns at both the state and national level. During the 2008 presidential election, she first started working for future President Barack Obama as a press secretary for his campaign, which led to jobs in the Obama administration as deputy White House communications director and deputy assistant to the President. [4]

In 2011, Psaki joined Global Strategy Group, a New York City-based polling and communications consulting firm, as its senior vice president and managing director. One of her projects during her nine-month stint at the firm involved advising the Export-Import Bank, the federal government corporation responsible for financing exports of American goods and services, on how to bolster declining support for the bank in Congress. [5] At the time, the bank was facing criticism by politicians and in the media for its recent series of failed investments, including more than $1.25 billion in taxpayer dollars in failed “green” energy corporations such as Solyndra, Abound Solar, and Calisolar. [6]

In 2012, Psaki joined President Obama’s re-election campaign as the primary spokesperson and senior communications advisor. The following year, she was appointed as a spokesperson for the Department of State, where she also advised then-Secretary of State John Kerry. In 2015, she returned to the White House, this time as communications director. Psaki oversaw the team responsible for the administration’s media strategy, crisis management, research, speechwriting, and other tasks. She remained at the White House through the end of President Obama’s second term. [7]

After leaving the White House, Psaki shifted her focus to private communications advisory services, primarily through her firm Evergreen Consulting. Notable clients included the ride-sharing service provider Lyft and the Center for Humane Technology, an activist organization that advocates for restrictions on technologies such as facial recognition and strengthening of data protection laws while also pushing for greater censorship of online speech. [8]

She also provided consulting services to the left-of-center pressure group Demand Justice, which opposes the appointment of right-of-center justices to the Supreme Court. Demand Justice accused the Trump administration of inflicting “damage” on the court and claims that implementing its demands will “restore balance and legitimacy.” One such demand was for Congress to impeach Justice Brett Kavanaugh, who was appointed by President Trump. [9]

Shortly before the 2020 presidential election, Demand Justice pushed for adding another four seats to the court and filling them with appointees who would overrule its Republican-nominated justices. The group claimed that a right-of-center majority on the court would help “steal” future presidential elections with close or disputed results. [10] Demand Justice also called on the court to reject challenges to the Affordable Care Act, commonly known as Obamacare, regardless of potential constitutional issues. In a statement on behalf of the group, Psaki dismissed objections to the law as “legal minutia” and labeled the court’s Republican-appointed majority “far-right.” [11]

President Joe Biden appointed Psaki to the position of White House Press Secretary. [12] Numerous publications and observers, primarily those right-of-center, assessed her performance negatively. The Washington Times criticized Psaki for her alleged misleading statements and unwillingness to correct perceived inaccurate claims by Biden. In particular, the Times cited her apparent refusal to address Biden’s false assertion that an election integrity law implemented in Georgia in 2021 mandated that polling stations close early, as well as her claim that Biden’s infrastructure plan would create 19 million new jobs. (The report she had relied on stated that more than 16 million jobs would be created even in the event that the plan failed, suggesting that the actual number of new jobs attributable to the plan would be fewer than 3 million.) [13]

The watchdog group Protect the Public’s Trust criticized Psaki for an alleged conflict of interest when she insulted a Fox News White House reporter, claiming that she used her official position to attack a competitor of her future employer MSNBC, and that her action “warrants an investigation by the Office of Government Ethics and the Department of Justice.” [14] CNN’s Oliver Darcy reported that a number of NBC journalists were concerned about Psaki negotiating her MSNBC role while still working at the White House. Those journalists were concerned that this could be a conflict of interest, and hurt NBC’s news brand because of MSNBC’s left-wing bias as a sister organization to NBC. [15]

In May 2022, Biden announced that White House communications advisor Karine Jean-Pierre would replace Psaki as Press Secretary. In his statement, Biden claimed that Psaki had “set the standard for returning decency, respect, and decorum to the White House Briefing Room.” He also described her performance as “communicating directly and truthfully to the American people.” [16]

Jen Psaki is married to Gregory Mecher, a Democratic Party aide. The two met while working for the Democratic Congressional Campaign Committee in 2006. Mecher has worked for Reps. Steve Driehaus (D-OH) and Joe Kennedy III (D-MA). Psaki and Mecher live in Virginia and have two children. [17]