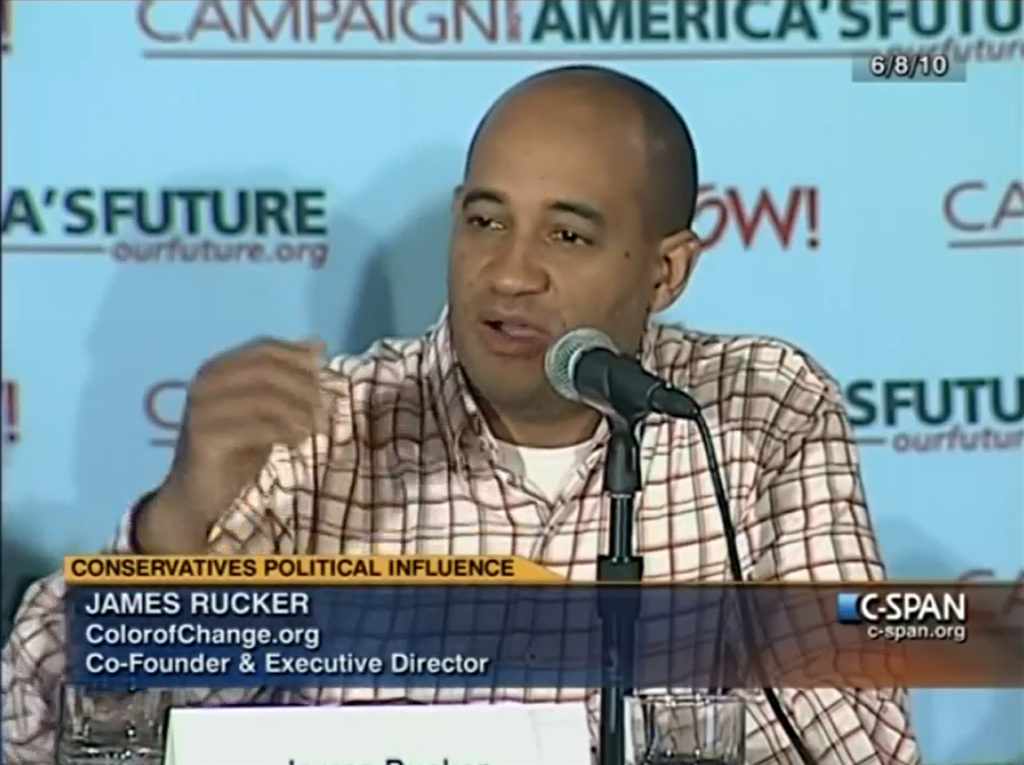 James Rucker is a left-of-center political activist who co-founded the left-of-center advocacy and activist groups Color of Change and Citizen Engagement Lab. He is considered a pioneer of contemporary left-of-center “Netroots Nation”-style digital activism, especially on racial issues.

Rucker was born and raised in Seaside, a town in Monterey County, California. He was the son of a high school guidance counselor and a school librarian. After attending mostly white parochial and private schools, he entered Stanford University. Rucker left college after his sophomore year to begin a startup that created software for radio stations. The company failed, and he returned to Stanford. After graduating, Rucker worked for several technology start-ups in the Bay Area. [1]

In 2003, Rucker was hired by Wes Boyd, one of the founders of MoveOn.org, the liberal “digital” advocacy group that grew to prominence during the Iraq War. Rucker became the first director of Grassroots Mobilization for MoveOn.org Political Action, a political action committee that jointly operates MoveOn.org with the nonprofit group MoveOn Civic Action. [2]

While at MoveOn.org, Rucker led projects trying to pressure the 2004 reelection campaign of President George W. Bush to not engage in what he called “racist, undemocratic” efforts to ensure the security of voter rolls, which Rucker alleged were aimed at suppressing minority voter turnout. Rucker also helped to develop television ads that encouraged minority and youth voter turnout in the 2004 presidential election. [3]

Rucker says he had discussions with MoveOn.org about how to engage more minority voters in the group’s activism, but believed that a separate, “black MoveOn” would be required to increase voter mobilization among liberal minority voters. [4]

Color of Change was founded in 2005 after Rucker and television commentator Van Jones sent an email to about 1,200 people circulating a petition that demanded a more robust response from the federal government to the damage caused by Hurricane Katrina. Rucker said later that he believed that the response to Katrina by state and federal officials showed that “Those in power don’t fear disappointing or neglecting or turning their back on Black folks.” [5]

Under Rucker’s direction, Color of Change became known for new Internet-based tactics, including use of hashtag protests and organizing boycotts online. [6]

In 2007, Rucker and Color of Change led a campaign in support of the “Jena Six,” a group of Black high school students in Jena, Louisiana who were charged with attempted murder after they severely beat a white student during school. The fight was the culmination of months of racial antagonism at the local high school, where nooses had allegedly been hung from a tree on the high school campus and part of the building was destroyed in an arson attack. The factual details of events leading up to the brawl were disputed. [7]

Color of Change argued that the defendants had been overcharged and that the harsh charges reflected racism in the state’s justice system. Criticism especially focused on the case against Mychal Bell, a 16-year-old who was initially charged as an adult because prosecutors said he was the instigator of the assault. After a publicity campaign and several marches orchestrated by Color of Change, including one that attracted 20,000 people to the 3,000-person town, prosecutors reduced the charges to aggravated second degree battery. [8]

The defendants eventually pleaded guilty to simple battery and settled a civil lawsuit brought by the victim. Color of Change also orchestrated a letter-writing campaign to the state bar to discipline the local prosecutor, J. Reed Walters, who had brought the initial charges. [9] The bar cleared Walters of all allegations, and he defended himself in the New York Times, stating that the victim in the case “was blindsided and knocked unconscious by a vicious blow to the head thrown by Mychal Bell” and then “brutally kicked by at least six people.” [10]

Color of Change stated that its membership tripled during the Jena Six controversy, and that it raised more than $170,000 for the defendants’ legal bills. [11] After lawyers representing the defendants stated that they had not been paid, some observers raised questions about how the money was spent. Accusations of mismanagement by the parents of the defendants also mounted after one of the Jena Six, Robert Bailey, was pictured on social media smiling and posing with $100 bills stuffed in his mouth, while two others were pictured “modeling like rap stars at the Black Entertainment Television Hip-Hop music awards.” Bell’s father, Marcus Jones, accused Rucker of misapplying the funds on a national radio show. [12]

By the time of the 2008 Presidential election, Color of Change stated that it had more than 425,000 members, most of them between the ages of 35 and 55. Rucker was critical of older civil rights groups such as the NAACP, especially when it backed former Rep. William Jefferson (D-LA) when he was indicted on public corruption charges. “Things are changing from where they were 30 years ago. The fights are changing. And you have an infrastructure that’s not producing results.” Rucker told an interviewer. “What are the old organizations accomplishing?”[13]

From 2009 to 2011, Rucker and Color of Change led a campaign to pressure companies to stop advertising on the Glenn Beck Show, then a highly rated show on Fox News, after Beck stated that then-President Obama had a “deep-seated hatred for white people or the white culture.” Rucker called Beck’s comments “race-baiting packaged as news” and organized a letter-writing campaign to pressure advertisers including Johnson and Johnson and Progressive Insurance to pull their commercials. [15] In 2011, Beck’s show was cancelled by Fox News after Color of Change pressured more than 300 sponsors to drop the show. Rucker claimed that he and others at Color of Change watched Beck’s last show and celebrated. [16]

Along with “guerilla filmmaker” Ian Inaba[18] and political consultant Daniel Souweine (who ran the national texting voter outreach program for the 2016 presidential campaign of Sen. Bernie Sanders (I-VT),[19] Rucker in 2008 co-founded the Citizen Engagement Lab (“CEL”) in Oakland, California. CEL is a consulting group and nonprofit “incubator” that organizes left-of-center groups for the purpose of advocating on a range of liberal political issues. The group provides consulting services and helps train and develop artistic and advocacy projects with a focus on race and poverty, and works to build the capacity of existing organizations. [20]

In 2006, Rucker helped to found Video the Vote, with CEL collaborator and “guerilla fillmaker” Ian Inaba. The group trains volunteers to film and document alleged voting rights violations. [25] As of May 2021, Video the Vote works in 11 electoral battleground states, including Florida, Ohio, Nevada, Wisconsin, and Arizona. [26]

As of May 2021, Rucker sits on the boards of Color of Change; MoveOn.org; the 50/50 Climate Majority Project; and the Southern Poverty Law Center Action Fund, a political action committee associated with the Southern Poverty Law Center. He was a board member of the New Organizing Institute before it disbanded, and is currently board chair of the Leadership Conference Education Fund (formerly the Leadership Conference on Civil and Human Rights), a coalition of civil rights groups. [27]