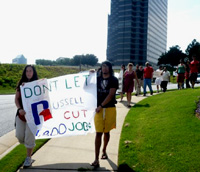 United Students Against Sweatshops (USAS) is a labor-union-backed organizing effort focused on college campuses that attacks major clothing brands involved in university licensing agreements that manufacture clothing overseas. It was founded in the late 1990s.[1] The group has also attacked Teach for America, a teacher training group that has been opposed by teachers unions.[2]