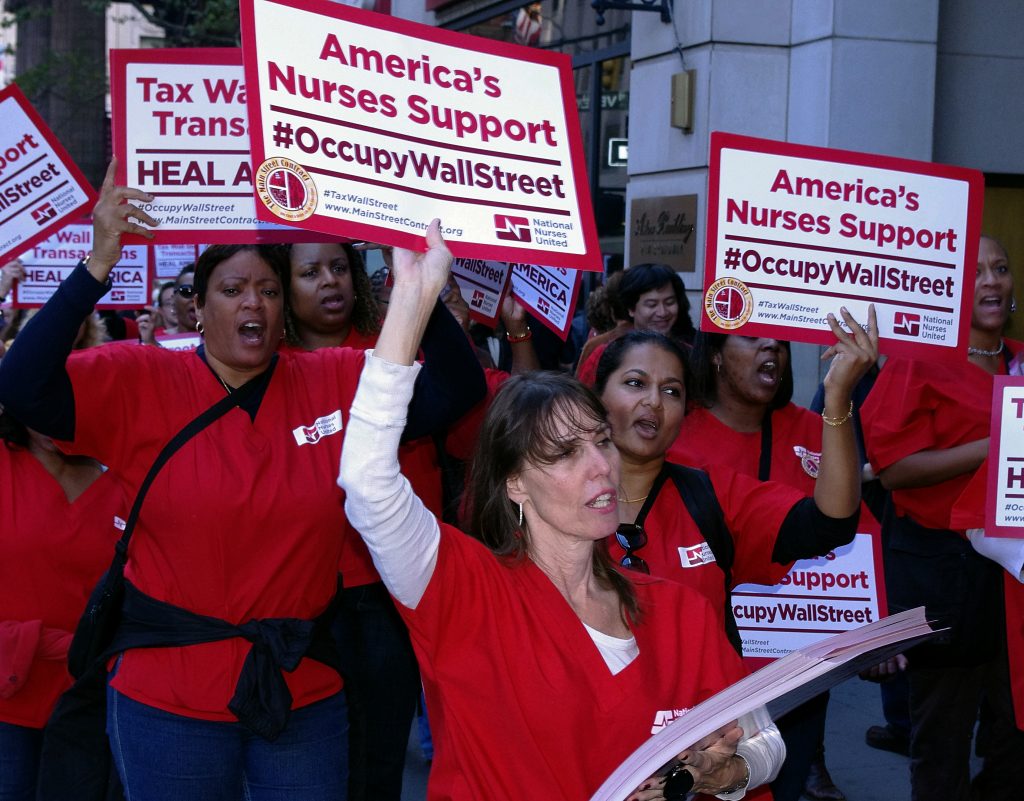 National Nurses United is a Washington, D.C.-based labor union representing nurses that is known for its far-left-of-center stances on various issues. The organization was founded in 2009 when several nurses’ unions merged. [1] It is a member union of the AFL-CIO. [2]

While the union’s best-known policy position is its strong support of the government takeover of the healthcare industry through “Medicare for All” single-payer healthcare, it is involved in other issues, including campaign finance restrictions and bans on natural gas exploration. However, the union has been criticized for being too radical by some on the center-left. [3]

The union is also known for its strong support of self-described democratic socialist U.S. Senator Bernie Sanders (I-VT). It was one of the few labor unions that openly supported his presidential campaign in 2016. It continues to support Sanders’s initiatives and the organizations that have spawned from his 2016 campaign.

National Nurses United is a 501(c)(5) tax-exempt organization. The union has a super PAC which it is uses to support candidates. It is also active lobbying on state and federal issues.

National Nurses United formed in 2009 through the merger of several state-based and a national labor union. The unions that merged were the California Nurses Association/National Nurses Organizing Committee, the United American Nurses, and the Massachusetts Nurses Association. The aim of the organization was to strengthen collective bargaining and advocate for patients through changing healthcare policy. [4]

National Nurses United is notable for its support for U.S. Senator Bernie Sanders (I-VT), a self-described socialist. The union was one of the few to endorse his presidential campaign in 2016.

“Bernie’s issues align with nurses from top to bottom,” said then-NNU executive director RoseAnn DeMoro: “insisting that healthcare for everyone is a right not a privilege, protecting Social Security and Medicare from those who want to destroy or privatize it and working to expand both, holding Wall Street accountable for the damage it has done to our communities, understanding the threat to public health from the climate crisis, environmental degradation, and the Trans-Pacific Partnership, support for minimum nurse-to-patient ratios for hospital patients, and on and on.” [8]

NNU campaigned for Bernie Sanders in the “Bernie Bus.” The bus went on a nationwide tour in the 2016 Democratic presidential primaries. The “Bernie Bus” debuted before the Iowa Caucuses in January 2016 and traveled the entire country until the end of Sanders’ campaign. [9]

After the 2016 elections, the union has continued its support for Sanders and his initiatives. In 2017, at the People’s Summit which was organized by Sanders campaign alumni and NNU, DeMoro called for the formation of a “people’s party” to replace the Democratic Party and called for Sanders to join it. [10]

NNU has also been a major supporter of the Sanders Institute, a think tank that was established to promote left-wing policies by Sanders’ wife. NNU was identified as a major contributor to the institute in 2018. It also co-sponsored the institute’s 2018 The Gathering, which brought leading left-wing activists together. [11]

The NNU is a major supporter of the government takeover of healthcare on both the state and local level. The group gained supported of California’s unsuccessful attempt to create a “single-payer” healthcare system in 2017. [12]

The bill was ultimately shelved by California Assembly Speaker Anthony Rendon (D-Los Angeles). After Rendon pulled the bill, DeMoro tweeted out a picture of a knife with Rendon’s name on it stabbed in the back of a California grizzly bear. Rendon claims that he was subjected to death threats after that tweet was sent out. [13]

In April 2019, National Nurses United members rallied in front of the headquarters of the Pharmaceutical Research and Manufacturers of America in support of single-payer, government-run healthcare. They used bandages to cover the walls of the building with printed GoFundMe pages of people raising money to pay for medical bills. The protest was done the day before the U.S. House of Representatives held hearings on single-payer healthcare. [14]

The NNU is also a strong opponent of reforms to the government-run Veterans Administration health system. Members of the union are able to be paid by the VA and other government agencies to conduct union work on so-called “official time.” [15]

It has also lobbied for a tax on financial transactions. The union claims that money from the tax could be used on healthcare, infrastructure, and jobs. Previously, Japan and Sweden had such a tax but it was repealed after a few years in both countries. [18]

The union has taken criticism that it is too radical. Democratic political consultant Steve Maviglio called the union ineffective because of how radical it is. “It’s sort of ‘all or nothing,’ and [the result has been] nothing, because what they advocate never gets enacted. They put on a good show, but when it comes to results, they’re just not there. No one takes them seriously in Sacramento other than if you’re afraid of having people demonstrating,” Maviglio said. [19]

Union members and employers have accused the union of various misdeeds such as using coercive actions such as surveillance, unilaterally changing the contract, and bad faith bargaining among other allegations. [20]

When Castillo took over as executive director, she believed that her union was capable of capturing the national moment because of the fact her membership is predominately female. “This is a predominantly female workforce,” Castillo says in an interview, “which I believe has been inspired by the movement of women, whether in #MeToo or the teachers standing up. We are finding that even nurses who are not organized are contacting us and wanting to organize.” [23]

Castillo is seen by some as less combative and radical than her predecessor, RoseAnn DeMoro. Castillo’s allegedly more moderate stance has drawn criticism from other left-wing activists. Ralph Nader, whose presidential campaign California Nurses Association endorsed in 2000, worried that Castillo is more committed to improving the working conditions of nurses and is not as committed to non-nursing related activism. “There’s something lost,” Nader says, “because the new leader wants to focus on the nurses more — the staffing issue, the pay issue, the benefits issue, the safety issue.” CNA and the NNU both deny that its focus will change under new leadership. [24]

According to the 2015 Form 990, it received $28 million in revenue and spent over $18.2 million. The primary source of revenue for the union was dues from its members.

Among the organizations it backed with donations are 350.org, Alternet Independent Media Institute, Economic Policy Institute, Jobs With Justice, Labor Campaign for Single-Payer Healthcare, and US Labor Against The War.