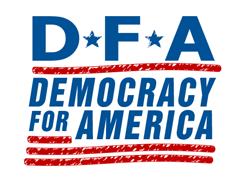 This is a logo for Democracy for America. (link)

It has endorsed political candidates such as Senator Bernie Sanders (I-VT) for President in the 2016 race for the Democratic Party’s nomination, and Reps. Rashida Tlaib (D-MI), Ilhan Omar (D-MN), Deb Haaland (D-NM) (as of 2021, U.S. Secretary of the Interior in the Biden administration), Alexandria Ocasio-Cortez (D-NY), and Veronica Escobar (D-TX) in the 2018 midterm election. [2]

It has also endorsed the Medicare For All, a proposal to create a government-run “single-payer” healthcare system in the United States by expanding the existing Medicare program to cover all citizens and bar the private provision of health insurance. [3]

Democracy for America (DFA) is a left-wing and self-described progressive political action committee created in 2004 by former Vermont Governor, Democratic National Committee chair, and Presidential candidate Howard Dean (D). [4] Dean, who served as the 79th Governor of Vermont from 1991 to 2003 and chair of the Democratic National Committee from 2005 to 2009, created Democracy for America one month after ending his failed presidential bid in 2004. It was the first presidential campaign to turn into a political action committee. Dean outlined that DFA would focus on pushing left-of-center policies. [5]

Democracy for America first endorsed the “Dean Dozen,” a group of 12 candidates, including then-Illinois State Sen. Barack Obama (D-Chicago) in his campaign for a U.S. Senate seat from Illinois. Democracy for America also campaigned for Dean to become the chair of the Democratic National Committee in 2005 which, while under his leadership, adopted the so-called “50 State Strategy.” [6]

DFA partnered with MoveOn Civic Action, also known by the name of its website MoveOn.org. MoveOn describes itself as “the largest independent, progressive, digitally-connected organizing group in the United States,” and partnered with Democracy for America in 2006 to make more than seven million calls across the United States to urge people to vote in key districts during the 2006 midterm elections. Through petitions, members of Democracy for America demanded presidential candidates for the 2008 election “be more progressive.” [7][8]

After finishing his tenure as Chair of the Democratic National Committee, Howard Dean returned to Democracy for America and started a campaign that assisted in passing the Affordable Care Act (Obamacare), major health care legislation passed in 2010 by the 111th Congress and signed by President Barack Obama. It has received criticism from right-leaning opponents for overstepping Constitutional bounds with an individual mandate that forces all citizens to buy health insurance, raising taxes, and for interfering with market mechanisms. Left-leaning opponents to the Affordable Care Act have criticized it for preserving a market structure and not pushing the American health system to a single-payer, socialized health care model. [9][10][11]

Democracy for America endorsed Senator Bernie Sanders (I-VT) for President in the 2016 race for the Democratic Party’s nomination with 87.9% of the 271,527 votes cast by DFA members nationwide. This was DFA’s first endorsement of a presidential primary candidate. [12]

Around November 2022, it was reported that DFA was facing significant financial issues, with two employees with the company’s development team telling Politico that former CEO Yvette Simpson had told both that “$320,000 needed to be raised for DFA to make it through the year.” [13] Around the same time Simpson had traveled to Napa Valley, CA where she attended both a “leadership training paid for by the organization and a personal multi-day sommelier education course.” [14] During the same trip in November 2022, she reportedly held a Zoom call with other DFA employees and stated, “We didn’t get major donations as we expected last month so we ended up using $100,000 from our reserve just to cover expenses…If I were you, I would be looking for another job. … I want every member of this team to go out into the marketplace to see if they can get another job just in case.” [15] On December 7, 2022, Simpson announced her resignation as CEO of DFA on Twitter, [16] whereas on the same day the entire non-leadership staff for DFA was laid off without severance. [17] As of December 2022, Democracy for America special adviser Charles Chamberlain has confirmed that the DFA PAC would be shut down although its 501(c)(4) nonprofit sister organization DFA Advocacy Fund would remain in operation. He added, “[A]s we head in the next cycle in this difficult fundraising environment, we’ve decided to close the PAC. We’re excited that the DFA Advocacy Fund will continue its work for the foreseeable future focused on election reforms like rank choice voting and national popular vote.” [18]

Democracy for America “stood in solidarity” with Black Lives Matter, a movement ostensibly seeking to reform police conduct especially as it involves the use of force against African-American suspects and civilians. The movement has been criticized for appearing to tolerate violent demonstrations in its name, for stoking racial tensions, and for creating an unsafe environment for police. It has also been criticized for pushing a left-wing extremist agenda under the false appearance of a moderate reformist movement. [22][23][24][25][26]

DFA highlighted in 2015 that its support for Black Lives Matter would require any candidate that seeks the PAC’s endorsement would have to explain what they have done and will do to support Black Lives Matter, and how they will “confront structural racism within our country’s culture of white supremacy.” DFA also noted that it would seek to recruit and support “progressive people of color to run for office and win in 2016 and beyond.” [27]

Democracy for America endorsed Senator Bernie Sanders (D-VT) for President in the 2016 race for the Democratic Party’s nomination with 87.9% of the 271,527 votes cast by DFA members nationwide. This was DFA’s first endorsement of a presidential primary candidate. Charles Chamberlain, the group’s executive director at the time, said in a statement that Sanders was an “unyielding populist progressive,” and his “lifelong commitment to taking on income inequality” helped him win DFA’s support. [28][29]

U.S. Rep. Alexandria Ocasio-Cortez (D-NY), also known as “AOC,” was first elected at 28 years old, and Ocasio-Cortez is as of mid-2020 the youngest woman ever elected to Congress and is a self-identified democratic socialist and a member of the Democratic Socialists of America (DSA). Ocasio-Cortez, fellow DSA member Rep. Rashida Tlaib (D-MI), controversial U.S. Rep. Ilhan Omar (D-MN), and left-wing Boston-area U.S. Rep. Ayanna Pressley (D-MA) are all members of a group of radical-left-aligned U.S. Representatives called “The Squad.” [31]

Democracy for America has also shown its support for Medicare-for-All (often styled “Medicare for All” or “Medicare for all”) a proposed policy to create a government-run “single-payer” socialist healthcare system in the United States by expanding the existing Medicare program from covering primarily older individuals to covering all citizens. DFA sponsored a Medicare-for-all petition aimed to “tell Congress” Medicare-for-all “will guarantee access to health care with comprehensive benefits, without premiums, co-pays or deductibles,” and “reduce health care spending and the cost of prescription drugs.” [32]

Other organizations sponsoring the petition, which had 137,024 as of July 2021, include American Family Voices, Daily Kos, Center for Popular Democracy Action Fund, Progressive Democrats of America, Justice Democrats, and Social Security Works. [33]