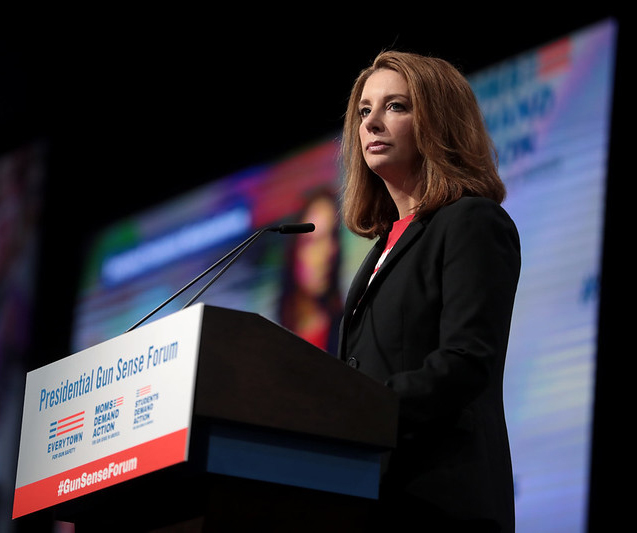 Despite repeatedly claiming to support gun ownership, Watts has dismissed the idea of gun ownership for self-defense and claimed that laws allowing for deadly force in cases in which individuals believe it is necessary for self-defense create “armed vigilantes.” [2] [3] Watts also dismissed a 2018 opinion piece written for the New York Times in which a Jewish mother discussed her decision to purchase a firearm after being threatened by neo-Nazis, deriding the story as that of a “white woman based on her anecdotes of fear and paranoia.” [4]

Watts has repeatedly presented herself as a stay-at-home mother moved to activism by the 2012 Sandy Hook shootings. In 2016, National Public Radio did a story on Watts, claiming that she was one of a number of “regular people” that supported left-of-center gun control proposals who had “never done anything political before.” [5] NPR later published a lengthy correction, acknowledging that Watts had worked in a number of public facing careers and reporting that Watts had contributed over $10,000 to Democratic campaigns and political action committees. [6] The following year, after a series of staff departures from Everytown and Moms Demand Action, anonymous former staff members alleged that the departures were related to Watts, calling her a “nightmare” and a “self-serving tyrant.” [7]

Watts is an active supporter of Democratic politics, contributing over $14,000 to Democratic campaigns and committees and encouraging individuals to support Democratic candidates in the 2020 election. [8] Though Watts is an avid supporter of increased government intervention, she has called into question the competency of state lawmakers in the past, claiming that “you would not trust many of these lawmakers to get you a cup of coffee, let alone make the laws.” [9]

Prior to becoming a left-of-center activist, Watts worked in a number of corporate communications positions. Watts worked as vice president of communications at health insurance giant WellPoint after holding a number of public relations jobs at GE Healthcare, Monsanto, and FleishmanHillard. [10] In 2009, Watts founded VoxPop Public Relations out of her home while continuing to consult for FleishmanHillard until mid-2012. [11]

In the wake of the December 2012 Sandy Hook school shooting, Watts created an anti-gun Facebook group to organize in support of left-of-center gun control measures that eventually became Moms Demand Action. [12] Since then, Moms Demand Action has grown to include over 6 million members in all 50 states. Moms Demand Action merged with Mayors Against Illegal Guns, another left-of-center gun control organization founded by former New York Mayor and Democratic Presidential candidate Michael Bloomberg, to form Everytown for Gun Safety in 2014. [13]

Watts has claimed credit for leading Moms Demand Action to supporting a number of strict gun control measures. Watts has claimed that Moms Demand Action has beat 90 percent of bills supported by the National Rifle Association (NRA), prevented legislation that would expand access to firearms from passing, and passed strict gun control measures in 20 states across the country. [14] Watts also led Moms Demand Action in corporate campaigns to demand that companies ban firearms in their stores, including protests against Starbucks, Panera Bread, and Dick’s Sporting Goods. [15]

While leading Moms Demand Action, Watts has spearheaded partnerships with some of the largest left-of-center organizations in the United States. In 2020, Watts called for the end of active shooting drills that train students and school staff on how to stay safe in case of a school shooting. Watts claimed that the drills “cause trauma” and joined with the American Federation of Teachers (AFT) and the National Education Association (NEA), two of the largest left-of-center labor unions in America, to oppose them. [16]

During her time with Moms Demand Action, Watts wrote Fight Like a Mother: How a Grassroots Movement Took on the Gun Lobby and Why Women Will Change the World. The book endorses a wide range of left-of-center gun control measures, including so-called “red flag” laws that allow judges to deny an individual gun ownership indefinitely if they appear to be a “danger” to themselves or others, universal background checks on even private firearm sales, and laws that would impose criminal penalties on gun owners who do not follow government regulations on firearm storage in their own homes. [17]

Though Watts purportedly supports gun ownership, Watts has claimed that firearms are not necessary for self-defense. Watts has argued that laws which allow individuals to use lethal force when they feel it is necessary to defend themselves encourage “armed vigilantes to shoot first and ask questions later.” [18] Watts also attacked a 2018 New York Times opinion piece in which a Jewish mother purchased a firearm after receiving death threats from neo-Nazis, deriding the story as that of a “white woman based on her anecdotes of fear and paranoia.” [19]

Despite arguing for increased government control over firearms, Watts has openly questioned the competency of state lawmakers, insulting their intelligence by calling them “not exactly rocket scientists” and claiming that “you would not trust many of these lawmakers to get you a cup of coffee, let alone make the laws.” [20]

Criticism of the NRA

Watts is particularly vitriolic toward the National Rifle Association, comparing its leadership to “cockroaches” and calling herself the NRA’s “worst nightmare.” [22] [23] Watts has accused the NRA of catering only to “older, white men” and taking right-wing stances on gun policy to “sell guns” and “maintain their profit margins” by “selling guns to women, inculcating children.” [24]  Watts has also decried gun culture in America, claiming that is has been “inculcated” by the NRA and is not related to American history. [25]

Watts has also accused the NRA of encouraging death threats against her after the organization criticized Watts’s selective representation of one of its articles and encouraged its supporters to tell her how they felt about her representation. When asked if the NRA was a “terrorist organization,” Watts claimed that it “depends how you define terrorists” and accused the NRA of “standing in the way of progress” at the cost of American lives. [26]

In 2017, multiple staff members resigned from their positions at Everytown for Gun Safety and Moms Demand Action, including Everytown’s managing director and deputy organizing director. A source told the Daily Caller that the departures may have been influenced by Watts, calling her a “nightmare” and claiming that staff who worked under Watts “quit or are fired faster than the organization can replace them.” A second source sent a written statement to the Daily Caller, alleging that gun control supporters are united by two beliefs, one being that “Shannon Watts is a self-promoting tyrant.” [27]

Despite an Everytown for Gun Safety spokesman denying the claims related to her leadership, Watts has personally admitted that she has felt her ego “get out of check” during her career as an activist. [28]

Despite her corporate background, Watts has repeatedly referred to herself as an apolitical, stay-at-home mother who was motivated to become an activist by the Sandy Hook school shooting. In 2016, National Public Radio did a story on Watts pushing this narrative, claiming that Watts was one of a number of “regular people” who supported left-of-center gun control proposals and saying she had “never done anything political before.” [29]

Just weeks later, NPR published a lengthy correction to the story acknowledging their misrepresentation of Watts. The publication’s correction acknowledged that Watts worked in corporate communications for nearly fifteen years and also noted that Watts had formerly worked as a public affairs officer in the Missouri state government. Beyond her history of public-facing jobs, the correction further reported that Watts made over $10,000 in contributions to Democratic campaigns and political action committees as of 2016, including about $3,000 in contributions before founding Moms Demand Action. [30]

Watts has supported a number of Democratic politicians, specifically those who endorse the implementation of restrictive gun control measures. During the 2020 election, Watts backed the Democratic ticket of Joe Biden and Kamala Harris, claiming to be “invigorated” by the ticket because the officials promised to implement left-of-center gun control measures within their first 100 days in office. [32] In addition to supporting the Democratic presidential ticket, Watts and Moms Demand Action supported a number of other Democratic candidates, including now-U.S. Senators John Hickenlooper (D-CO), Raphael Warnock (D-GA), and Jon Ossoff (D-GA). [33] [34] Watts herself appeared at several virtual events in support of Sen. Warnock. [35]

In the lead up to the 2020 election, Watts encouraged individuals to mobilize in support of Democratic candidates, including getting their voting-aged children to vote for Democratic officials. Watts also encouraged left-of-center activists to start “loudly” demanding taxpayer funding for anti-gun programs in their states. Watts further called on “white women” to vote in favor of Democratic candidates to “tear down systemic racism,” criticizing those who had voted for President Donald Trump in 2016. [36]

Watts has also claimed credit for leading Moms Demand Action to support Democratic victories in 2018, including electing former Moms Demand Action member and current U.S. Representative Lucy McBath (D-GA) and flipping seven state legislatures to Democratic control. [37] Since 2016, Watts has sat on the board of Emerge America, a left-of-center organization that trains Democratic women to run for public office. [38] Watts herself has given over $14,000 to various Democratic candidates and political action committees. [39]

In 2017, Watts considered running for the United States House of Representatives from Colorado but decided against a campaign in order to focus her efforts on promoting left-of-center gun control measures through Moms Demand Action. [40]