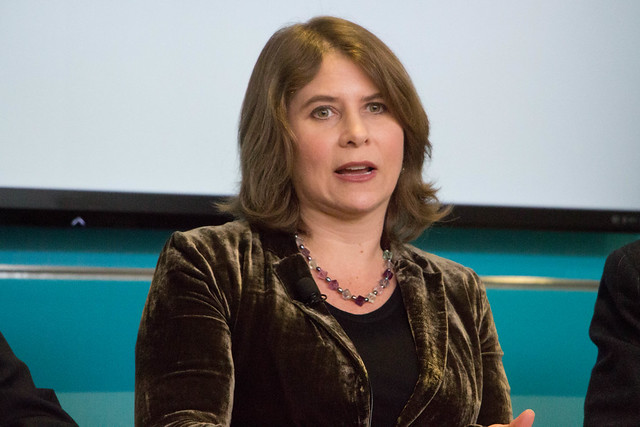 Rosa Brooks, born Rosa Ehrenreich, is the daughter of longtime feminist activist Barbara Ehrenreich and is a law professor at Georgetown University in Washington, D.C. [1] She is also an adjunct senior scholar at the Modern War Institute, a think tank connected to the United States Military Academy at West Point. Between 2009 and 2011, Brooks worked for the Obama administration as a counselor to former Undersecretary for Defense Michele Flournoy, and from 2016 to 2020, she was a part-time police officer with the Washington, D.C. Metropolitan Police Department. [2] Prior to working in the Obama administration, Brooks was a special counsel to the president of the Open Society Foundations, formerly known as the Open Society Institute – the flagship organization within the international grantmaking and activism network of billionaire financier and left-progressive ideologue George Soros. [3]

Brooks is the co-founder of the Transition Integrity Project, a collective of Democratic Party operatives and Republican public figures known for their opposition to President Donald Trump. The organization released a report in the summer of 2020 to make worst-case predictions about the outcome of the 2020 presidential election. Brooks, along with the project’s other leading participants, including anti-Trump longtime conservative pundit William Kristol and former George W. Bush administration speechwriter David Frum, claimed that President Trump would call for violence against his opponents and attempt to have ballots destroyed. They also suggested that Trump’s opponent, former Vice President Joe Biden, could start demanding concessions that would strengthen the Democratic Party’s political power in the event that he lost. These concessions included, but were not limited to, statehood for Washington, D.C., and Puerto Rico, and more Senate seats for the Democratic-controlled state of California. [4]

The Project and its report were praised by legacy and left-of-center media outlets and received widespread coverage by those outlets. [5] [6] It was condemned by conservatives for its leadership makeup, its claims of bias despite that makeup, and the report’s support for Biden to undermine the election if he lost. [7]

Brooks had been a vocal critic of Donald Trump well before the 2020 election. She suggested the possibility of removing him from office through extra-judicial means just over a week after his inauguration in an article for Foreign Policy titled “3 Ways to Get Rid of President Trump Before 2020.” In addition to a provision of the 25th Amendment allowing the Cabinet to suspend an incapacitated President’s powers, impeachment and removal from office, the article included an appeal to members of Trump’s cabinet to “oust their boss,” as well as the “fourth possibility” of “a military coup.” In Brooks’ imagined scenario, President Trump would issue an order to which senior military officials would respond “we’re not going to do that” and receive “thunderous applause from the New York Times editorial board.” Brooks made these recommendations for removing President Trump from office in January 2017, while she was employed by West Point and the Washington, D.C., police department. [8] When the right-of-center publication Breitbart published a piece criticizing her proposals to remove the president, Brooks responded by labeling her critics a “lynch mob” and claiming she had no idea “that anyone could construe” her words “as a call for a military coup.” [9]

Brooks’ hostility towards conservatives precedes the Trump administration. In a 2008 opinion piece for the Los Angeles Times, Brooks called supporters of the Republican Party “paranoid, rage-driven, xenophobic nuts.” She has also accused the George W. Bush administration of exaggerating the danger that the Islamic terrorist organization Al Qaeda posed to the United States, claiming that it “did not pose an imminent mortal threat to the nation.” [10]

Rosa Brooks completed her bachelor’s degree in history and literature at Harvard University and her master’s degree in anthropology at the University of Oxford in the United Kingdom. She went on to attend Yale Law School. One of Brooks’ first jobs was providing consulting services to the left-of-center international legal organization Human Rights Watch. Several years later, she took a job advising the president of the Open Society Foundations on legal matters. Under the Obama administration, Brooks would continue her consulting career with the federal government, becoming a counselor to the Undersecretary for Policy at the Department of Defense in 2009. After leaving the administration in 2011, Brooks accepted a fellowship at the New America Foundation, now known as New America. In 2014, she was promoted to senior fellow and began working with a defense policy program in partnership with the University of Arizona. [11]

In 2001, Rosa Brooks took a job as an associate professor at the University of Virginia law school. She taught constitutional, criminal, and human rights law for five years. Two years later, Brooks returned to teaching, this time as a law professor at Georgetown University, where she continues to work today. Throughout her time at Georgetown, she has also served as Associate Dean of Graduate Programs and is currently the Associate Dean for Centers and Institutes. In 2017, less than a year after becoming a part-time police officer, Brooks took on the additional role of managing the university’s Innovative Policing Program, a left-of-center research and policy recommendation initiative. [12]

From 2005 to 2009, Brooks worked as a columnist for the Los Angeles Times, writing left-of-center foreign policy and other political commentary. This included her articles downplaying the threat posed by the terror group Al Qaeda and her disparaging comments about the Republican Party. [13] [14] In 2012, she became a columnist and contributing editor for Foreign Policy magazine. It was during this time that Brooks wrote her article proposing ways to remove President Donald Trump through extraordinary means. Brooks left Foreign Policy in 2019. [15] [16]

In 2016, Brooks released her first book, titled How Everything Became War and the Military Became Everything: Tales from the Pentagon. In the book, Brooks discussed what she perceived as the changing nature of warfare and the unreasonable demands which she believed that policymakers had started making of the United States military in recent years. A review by the National Defense University Press praised Brooks’ expertise in defense policy but questioned her assessment that the nature of war is undergoing fundamental changes. [17]

In 2021, within a year of finishing her stint as a part-time police officer in Washington, D.C., Brooks released a book titled Tangled Up in Blue: Policing the American City. [18]  According to a generally positive review in Foreign Affairs, Brooks claimed that police officers are “taught to believe that their jobs are more dangerous than they truly are” and cited this as the cause of some police shootings.” She also alleged a trend of upgrading some crimes from misdemeanors to felonies, and condemned it as an “explosion of over-criminalization.” [19] The socialist magazine The Nation applauded Brooks for her claim that “being a cop isn’t nearly as dangerous as cops think it is,” calling it “an astute observation.” However, The Nation gave the book an overall negative review, criticizing Brooks’ self-described decision to become a police officer to study the profession and arguing that “the police just aren’t the right people to ask” about law enforcement and criminal justice policy. [20]

In an interview with NPR, Brooks said her decision to join the D.C. police was opposed by her husband and mother. [21]