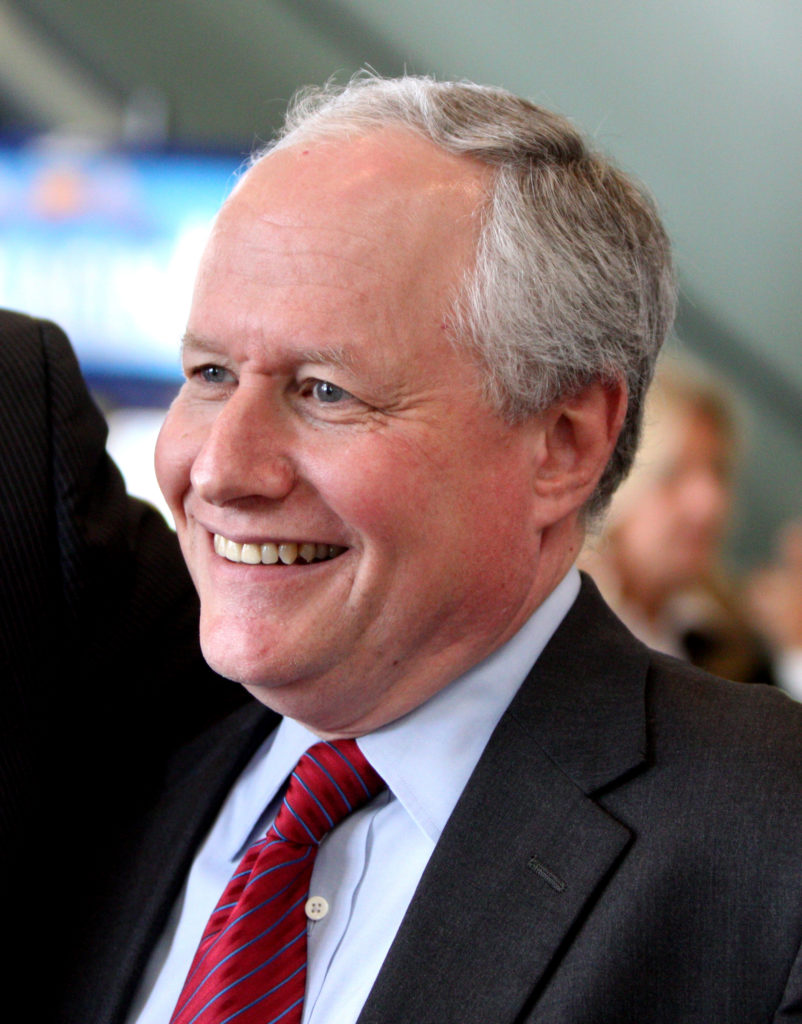 William (Bill) Kristol is a political commentator and the son of left-wing-turned-conservative intellectuals Irving Kristol and Gertrude Himmelfarb. [1] Since the mid-1990s, he has been one of the strongest public proponents of foreign policy interventionism (contemporary neoconservatism), and has influenced Republican Party policy concerning health care, immigration, and foreign policy. Kristol is a co-founder and board member of a number of right-leaning groups critical the Trump administration, including Defending Democracy Together and its 501(c)(3) arm, Republic Affairs (formerly Defending Democracy Together Institute). Kristol is currently the editor-at-large at The Bulwark, a nominally right-of-center media outlet run by Republic Affairs that was created after the enforced closure of the Kristol-founded Weekly Standard by its corporate parent.

After serving in the presidential administrations of Ronald Reagan and George H.W. Bush, Kristol became a conservative public intellectual and founded three think tanks. He helped defeat President Bill Clinton’s healthcare reform plan and was among the most outspoken supporters of the Iraq War during George W. Bush’s administration. In 1995, Kristol founded the Weekly Standard, a leading magazine espousing contemporary neoconservatism.

Kristol is one of the most well-known ostensibly right-leaning critics of President Donald Trump. [2] Kristol organized the Weekly Standard and numerous think tanks to promote opposition to Trump during and after his rise in the Republican primary during the 2016 presidential election. Kristol blames the decline in readership and closing of the Weekly Standard on its opposition to Trump. [3] In 2018, The Bulwark was reformed out of Standard editors and writers to oppose the Trump administration.

In February 2020, Kristol publicly declared that he would support a Democratic candidate against Trump in the 2020 election. [4]

Kristol was born in 1952 in New York City to a Jewish family. His father, Irving Kristol, was an influential conservative political commenter who regularly contributed to the New York Times and The Atlantic[5] and was the editor of The Public Interest. The New York Times’s obituary called Irving Kristol, “the godfather of neoconservatism”;[6] in Irving’s time, the term referred to a network of former liberals and progressives discontented by the cultural convulsions of the 1960s. [7]

Bill Kristol began studying at Harvard University as a political science major in 1970. [8] He became a follower of Leo Strauss, a German-American political philosopher who opposed modern progressivism. Kristol became known as an outspoken conservative who publicly challenged the dominant left-leaning campus culture, joining The Alternative, the only conservative publication on campus, as a contributor and editor. [9]

After graduating in three years, Kristol stayed at Harvard to earn a Ph.D. in government. [10] In 1975, Kristol met Susan Scheinberg (now known as Susan Scheinberg-Kristol) while she was an undergraduate at Harvard. The two eventually married and have three children. [11] Kristol’s daughter, Anne, is married to Matthew Continetti, a scholar at the center-right American Enterprise Institute and the founding editor of the Washington Free Beacon. [12]

In 1976, Kristol worked on the successful U.S. Senate campaign of Daniel Patrick Moynihan (D-NY). [13] Though a Democrat, Moynihan had been an advisor to Republican President Richard Nixon. [14]

From 1979 to 1983, Kristol worked as a professor in the Department of Political Science at the University of Pennsylvania. For the following two years, he worked at Harvard University’s Kennedy School of Government. [15]

In 1985, Kristol became the chief of staff for William Bennett, U.S. Secretary of Education in the Reagan administration. [16]

In 1988, Kristol served as campaign manager for an unsuccessful Senatorial campaign by political activist Alan Keyes (R-MD), who had been Kristol’s roommate at Harvard. [17]

From the mid-1990s until the 2016 Presidential election, Kristol was a leading conservative intellectual. During this period he led public opposition to the Clinton administration’s proposed “Hillarycare” government-run health care proposal and promoted a firmly interventionist foreign policy agenda. [20]

“Rejection by Congress and the public would be a monumental setback for the president, and an incontestable piece of evidence that Democratic welfare-state liberalism remains firmly in retreat.” [21]

Kristol successfully convinced Congressional Republicans to stop all Democratic health care legislation. This failure by Clinton was considered a major cause of the Republican resurgence in the 1994 mid-term elections that gave Republicans control of Congress. [22]

In 1996, in response to the reelection of President Bill Clinton, Kristol established a second D.C.-based advocacy group, Project for the New American Century (PNAC). The organization was focused on foreign policy, with Kristol advocating for an aggressive strength projection strategy that became closely associated with contemporary neoconservatism. Kristol and PNAC were highly critical of President Clinton’s foreign policy, particularly for what they perceived as soft policies in the Middle East. [23]

Also in 1996, Kristol became a panelist on the ABC News show “This Week.” Kristol appeared on the show for three years until his contract was not renewed. [24]

PNAC endorsed U.S. Senator John McCain (R-AZ) for the Republican Party presidential nomination in 2000. After the attacks of September 11, 2001, PNAC became a major conservative supporter of wars against Afghanistan and then Iraq and urged President George W. Bush to intervene. In 2006, PNAC shut down. [25]

In February 2003, one month before the American invasion of Iraq, Kristol and co-author Lawrence Kaplan published The War over Iraq: Saddam’s Tyranny and America’s Mission. The book argued for American intervention into Iraq and laid down much of the strategic and ideological groundwork the George W. Bush administration would use to justify the Iraq War. [26]

In the mid-2000s, Kristol was an early proponent of deploying more soldiers to Iraq to combat the rising insurgency. With retired U.S. Army General Jack Keane and conservative pundit Fred Kagan, Kristol had a private meeting with White House Chief of Staff Josh Bolten in late 2006. In January 2007, President Bush announced a 30,000-man troop “surge” in Iraq. The successful advocacy has been declared “Bill’s greatest achievement.” [27]

In 2008, Kristol became a regular contributor to the New York Times, despite writing in 2006 that the paper should be investigated and potentially prosecuted for leaking confidential information on the Terrorist Finance Tracking Program. Clark Hoyt, the public editor of the New York Times, later wrote an op-ed expressing regret for having hired Kristol. [28]

In 2008, Kristol served as a foreign policy advisor in the Republican presidential campaign of John McCain. [29] He initially supported the selection of Sarah Palin (R-AK) as McCain’s running mate, but later opposed her. [30] However, he still suggested Palin should run for U.S. Senator in 2014. [31]

In 2009, in response to the election of President Barack Obama, Kristol founded a think tank, the Foreign Policy Initiative, with seed funding from Republican hedge-fund billionaire Paul Singer. [32] This organization also supported an aggressive interventionist foreign policy, and harshly criticized the Obama administration for policies that Kristol perceived to be weakening America’s global security. [33] However, in 2011 Kristol supported President Obama’s military intervention into the Libyan Civil War and urged other Republicans to do the same. [34]

In 2009, Kristol was awarded the $250,000 Bradley Prize from the Lynde and Harry Bradley Foundation, a right-of-center private grantmaking foundation which supports conservative individuals and organizations. [35]

In 2013, Kristol worked with conservative pundit Rich Lowry to oppose a major immigration bill proposed by Chuck Schumer (D-NY) and the Democratic-controlled Senate. Kristol urged all Congressional Republicans to reject the bill on the grounds that its border enforcement was lacking and the bill would further liberalize immigration. The bill was rejected, with Kristol and Lowry receiving much credit for rallying Republican opposition. [36]

In 1995, Kristol co-founded the Weekly Standard with funding from billionaire media mogul Rupert Murdoch. The political magazine featured punditry on current events and especially foreign policy from an interventionist-contemporary neoconservative perspective. Kristol also served as co-editor with co-founder Fred Barnes, a long-time conservative pundit, until 2017. The publication reached the height of its popularity during the Bush administration when its viewpoints were seen as the ideological exemplification of the Republican leadership. [38] The Financial Times called the Weekly Standard the “neo-con bible.” [39]

Though the Weekly Standard had a circulation of only 55,000 for its 48 annual issues, it was considered one of the most influential publications in America during the George W. Bush administration. The magazine was kept on Air Force One, and was reportedly read by Secretary of Defense Donald Rumsfeld, Secretary of State Condoleezza Rice, and Vice President Dick Cheney. At the height of its influence, the magazine was losing about $1 million per year. [40]

The Weekly Standard closed in 2018. Kristol attributed its fall to declining readership and funding due to its anti-Trump stance. [42]

Kristol continues to sit on the boards of other right-of-center think tanks. As of April 2020 he sits on the board of trustees of the Manhattan Institute for Policy Research[44] and the policy advisory board of the Ethics and Public Policy Center. [45]

Kristol is one of the most outspoken ostensibly conservative opponents of President Trump. [46][47] However, Kristol has also been criticized for causing the rise of Trump because of the way his influence on the Republican Party over the preceding decades supposedly undermined the establishment forces. [48]

Kristol has publicly opposed Trump since he became a front-runner in the 2016 Republican presidential primary, saying that he didn’t like the businessman’s “fundamental character.” Using his influence in the Republican Party, Kristol personally sought alternative candidates to enter the 2016 Presidential race, including future Secretary of Defense General James Mattis, future U.S. Senator Mitt Romney (R-UT), and then-National Review writer David French. Kristol eventually supported the independent candidacy of Evan McMullin, who won 0.5% of the popular vote and no Electors in the Electoral College. [49]

After the election of President Trump, Kristol began attending a so-called “meeting of the concerned,” a weekly gathering hosted by the Niskanen Center in Washington DC with other anti-Trump nominal and former Republicans, including Niskanen Center co-founder Jerry Taylor, former Congressman Mickey Edwards (R-OK), and writers David Frum, Mona Charen, and Jennifer Rubin. There Kristol met Sarah Longwell, who later became the publisher of Kristol’s online outlet, The Bulwark. [50]

In 2018, Kristol co-founded and began working as editor-at-large of The Bulwark with talk radio host Charlie Sykes. The online magazine is published by Sarah Longwell, a political operative and the first female board chair of the Log Cabin Republicans. [51] Many of The Bulwark’s writers and staff members are former employees of the Weekly Standard. [52]

The Bulwark began as a news aggregator of conservative articles but evolved into an “opinion news website.” Its writing has been consistently critical of President Trump. [53][54]

In 2018, Kristol and Longwell co-founded Defending Democracy Together and Republican Affairs, nominally right-of-center advocacy and incubation groups which oppose President Trump. [55] The groups started The Bulwark and Republicans for the Rule of Law, a group which pressured Republican U.S. Representatives to support the impeachment of Trump and continue investigating allegations put forward by the controversial opposition research firm Fusion GPS of compromising behavior by President Trump and his aides in and related to Russia.

“Not presumably forever; not perhaps for a day after Nov. 3, 2020; not on every issue or in every way until then. But for the time being one has to say: We are all Democrats now.”

Though many pundits declared that Kristol had officially become a Democrat,[59] Kristol clarified in an interview that he only meant that he would support a Democratic presidential candidate in 2020 since no challenger had defeated Trump from within the Republican Party. [60]

In May 2020, Republicans for the Rule of Law announced its plan to spend $1 million on a series of ads urging congressional Republicans to support an expansion to mail-in voting within the next coronavirus stimulus bill. The ads will feature state voters urging Congress to allow vote-by-mail in November due to the danger of in-person voting during the ongoing Covid-19 Pandemic. [61]

In March 2021, Kristol endorsed statehood for Washington D.C. and Puerto Rico, while also suggesting that Cuba could someday become a U.S. state, if the Castro regime was to be toppled. [62]